Remember the Vallejo Cop Who Tackled a Veteran for Filming Him?

Now he's being sued for another act of excessive force. 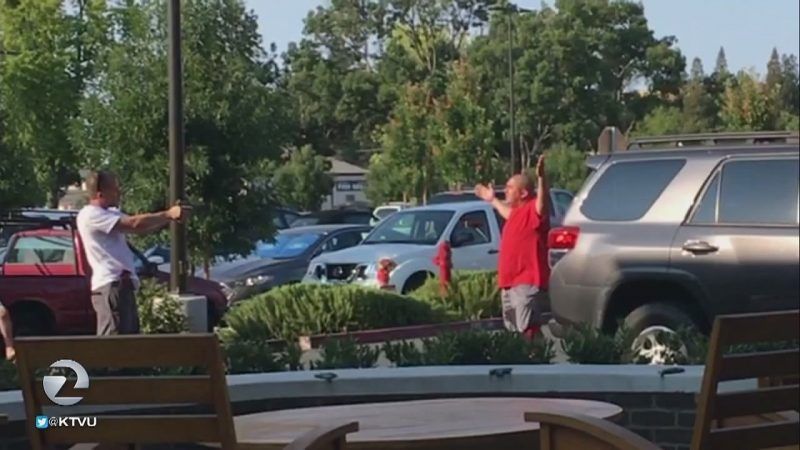 Remember the police officer in Vallejo, California, who made national headlines in January for tackling a man who'd been filming him on a cell phone? Now he's being sued for beating someone in a separate incident.

In a federal civil rights lawsuit filed Wednesday, Santiago Hutchins alleges that Officer David McLaughlin, who was off-duty at the time, held him at gunpoint following a verbal altercation outside a pizzeria in 2018 and then used unconstitutional and excessive force to arrest him. Cellphone footage obtained earlier this year by local news station KTVU shows McLaughlin punching and elbowing Hutchins while two other officers hold Hutchins down.

According to the lawsuit, Hutchins suffered "a concussion, right eye hematoma, facial pain, headache, swelling in the head, face contusions, face lacerations muscle strains, and rib contusions" as a result of the beating.

Hutchins was arrested on suspicion of disturbing the peace, according to the East Bay Times, but the charges were later dropped. On October, Hutchins' attorney filed an internal affairs complaint with the Vallejo Police Department on Hutchins' behalf. According to Hutchins' lawsuit, neither Hutchins nor his lawyer ever received a response to the complaint.

Hutchins also filed a claim for damages against the city, a precursor to a civil rights lawsuit, against Vallejo. In April, Vallejo rejected his claim, on the grounds that McLaughlin was not on-duty as a city employee when the incident happened.

"The city has not yet been served with this lawsuit, though it has denied the claim, finding that Officer McLaughlin was off duty at the time of the incident," Vallejo city attorney Claudia Quintana says in a statement to Reason.

Six months after Hutchins' violent arrest, McLaughlin got into an altercation with Vallejo resident Adrian Burrell, a documentary filmmaker and former Marine. Burrell was standing on his porch filming the traffic stop of his cousin with his cell phone.

I am a Black man born and raised in Oakland, California who was physically attacked by Vallejo PD officer David McLaughlin, last Tuesday. In researching my situation, I learned that Mclaughlin has been involved in lawsuits related to his brutality including the fatal shooting of on August 3rd, 2018. Mclaughlin grabbed me, smashed my face against the wall and then swung my body, knocking my head into a wooden pillar causing a concussion. He put handcuffs on my wrists so tight they broke the skin and caused my fingers to go numb. All while telling me "stop resisting" to my reply, "I'm not resisting."I'm a Marine, and was honorably discharged when I completed my service. I have no convictions on my record; I'm not on parole or probation. I own my home, I was on the porch of this home when McLaughlin pulled his pistol on my cousin, saying my cousin looked like someone who he saw speeding earlier. My cousin was sitting on his motorcycle in front of my house. A gun had been pulled on him because he "looked like someone" the officer had seen speeding earlier. Obviously, the situation concerned me. From roughly 20 ft away, with a railing between myself and the officer, I started filming with my phone. You have the right to film a police officer in action as long as you're not a threat or preventing him from doing his job. The officer told me to go in my house. I chose to stay on my porch and film because the situation was concerning. My camera panned and tilted, but I did not take one step off of the porch. At that point, officer Mclaughlin approached me as you see in the video. He said I was going to jail and detained me in the back seat of his car. Would I have gone to jail if I weren't a vet with no criminal record? When the officer realized I am a Marine, he told me if I wasn't a vet I'd be going to jail. Does that mean that if I had not been a vet, he would have put me in jail for not breaking the law? Because I am a vet, does that mean my life is more valuable? Military service does not warrant special treatment. Lack of military service does not justify mistreatment?Why holster your gun to come put your hands on me, if my cousin and I are a threat?This unfortunate circumstance put me in a situation where if I was to defend myself, then I would have been a hashtag. Or worse, my death would have been ignored or excused on the premise of Mcglaughlin's irrational fear.Officer McLaughlin should not be allowed to continue abusing his power.This is a true story and I feel it's my responsibility to share it.Police need better training on implicit bias. They need tougher disciplinary actions taken when patterns of misconduct become frequent and are being reported from multiple sources.#Share #repostfamilyandfriends

When McLaughlin saw Burrell filming him, he ordered him to get back, although Burrell was standing about 20 to 30 feet away. Burrell refused.

Although filming the police is protected under the First Amendment as long as it doesn't interfere with police duties, McLaughlin walked up to Burrell, swept him to the ground, and placed him under arrest.

Burrell was detained in the back of a squad car but eventually released, allegedly after police discovered he was a Marine veteran. He says he suffered a concussion as a result of being thrown to the ground.

Reason reported on Hutchins and Burrell's cases earlier this year as part of a larger story on the Vallejo Police Department. Despite its relatively small size, the department has generated a large number of civil rights lawsuits and settlement payouts:

Like many recorded instances of police misconduct over the past five years, Burrell's cellphone footage, uploaded to Facebook, went viral, sparking national media coverage. But it was only one of a string of high-profile police incidents in recent months that have inflamed long-running tensions in Vallejo—a diverse, blue-collar city north of Oakland, California—between the city's police department and its citizens. Almost all of the recent incidents have been caught on cellphones or police-worn body cameras. Local activists say they finally show what lawsuits and protesters have complained of for years.

Vallejo has paid out millions of dollars to settle civil lawsuits alleging wrongful deaths, brutality, and misconduct over the past decade. According to Claudia Quintana, Vallejo city attorney, there are currently 35 pending claims and lawsuits in connection with the Vallejo Police Department, 16 of which allege excessive force. There have been accusations of police retaliation against victims who have come forward, the police chief resigned in April, and the mayor has asked that the Justice Department come to town to try to mend the frayed relationship between police and the community.

McLaughlin was put on leave on February 4, three days after local reporters obtained footage of Hutchins' beating and reported that he was the same officer from the Burrell incident.

Burrell has not yet filed a civil rights lawsuit. Last month, the City of Vallejo denied his claim as well.

"We intend to hold every officer to high standards whether on duty or off duty," Vallejo's interim Police Chief Joe Allio says. "At all times the city takes seriously any reported conduct  that compromises the trust our community places in us."

Reason has been waiting more than six months to receive public records from the Oakland and Vallejo police departments on McLaughlin's misconduct history.