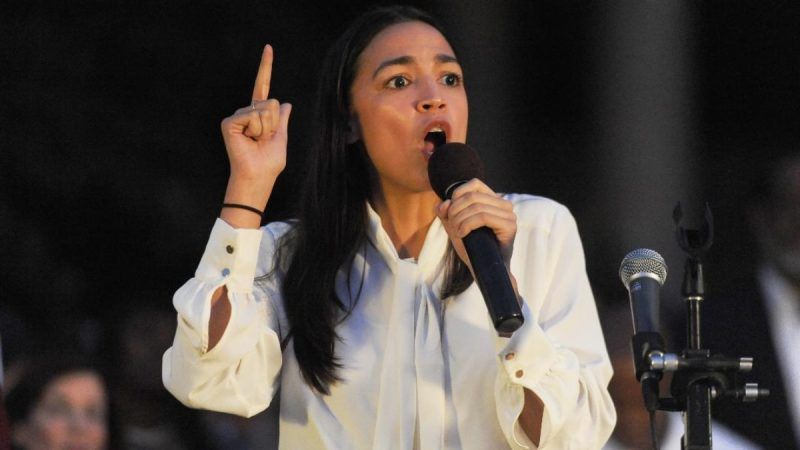 On the same day last month that a federal appeals court ruled that Donald Trump's blocking of irksome critics on Twitter violated the First Amendment, former New York state legislator Dov Hikind sued Rep. Alexandria Ocasio-Cortez (D–N.Y.), arguing that she had committed the same constitutional sin by blocking him. Yesterday, Columbia University's Knight First Amendment Institute, which filed the lawsuit that led to the ruling against Trump, asked Ocasio-Cortez to cut it out.

"We understand from news reports that you may be blocking some Twitter users from your @AOC account because of the views they have expressed," Jameel Jaffer, the institute's executive director, writes in a letter to Ocasio-Cortez. "This practice is unconstitutional, and we are writing in the hope of dissuading you from engaging in it."

In addition to the ruling against Trump by the U.S. Court of Appeals for the 2nd Circuit (which includes New York), Jaffer cites a January ruling against Phyllis Randall, chair of the Loudoun County, Virginia, Board of Supervisors. In that case, the U.S. Court of Appeals for the 4th Circuit held that, because Loudon used her "Chair Phyllis J. Randall" Facebook page for official purposes and opened it to comments by the general public, the "interactive component" of the page qualified as a "public forum" under the First Amendment. The court upheld a federal judge's decision in favor of a local gadfly whom Randall had blocked after he posted a comment suggesting that members of the Loudon County School Board had taken official actions that benefited their relatives.

Echoing Trump and Randall, Ocasio-Cortez argues that her @AOC Twitter account is personal, not official. But in light of the principle established by the 2nd Circuit and 4th Circuit cases, Jaffer says, that argument does not hold water. "Based on the facts as we understand them, the @AOC account is a 'public forum' within the meaning of the First Amendment," he writes. "You use the account as an extension of your office—to share information about congressional hearings, to explain policy proposals, to advocate legislation, and to solicit public comment about issues relating to government."

The parallels between the president's @realDonaldTrump account and Ocasio-Cortez's @AOC account are pretty clear. Although both of them also have nominally official Twitter accounts (@POTUS and @RepAOC, respectively), their ostensibly personal accounts are much more popular as forums for discussing policy and politics (with 64 million vs. 27 million followers in Trump's case and 5.3 million vs. 188,000 in Ocasio-Cortez's). And Ocasio-Cortez, like Trump, uses her "personal" account for purposes related to her public office.

"Recently, for example," Jaffer says, "you used the account to discuss new 'policy approaches we should consider wrt immigration,' and to ask the public, '[w]hat commissions would you want to see Congress establish?' The account is a digital forum in which you share your thoughts and decisions as a member of Congress, and in which members of the public directly engage with you and with one another about matters of public policy….Many of your tweets staking out positions on issues such as immigration, the environment, and impeachment have made headline news. The @AOC account is important to you as a legislator, to your constituents, and to others who seek to understand and influence your legislative decisions and priorities."

The 2nd Circuit ruled that "the First Amendment does not permit a public official who utilizes a social media account for all manner of official purposes to exclude persons from an otherwise open online dialogue because they expressed views with which the official disagrees." But like Trump, Ocasio-Cortez is under no obligation to engage with her critics on Twitter or even to read what they say. In fact, she could, consistent with that decision, mute detractors such as Dov Hikind, so that she would never have to see their comments, as long as she allowed them to participate in the "interactive space" associated with her account.

"We urge you to unblock any Twitter users whom you or your staff have blocked from the @AOC account because of the viewpoints they have expressed," Jaffer says, while noting that Ocasio-Cortez still may block Twitter users "for reasons that are both reasonable and constitutionally legitimate," such as threats of violence. "We would welcome the chance to work with you to develop a social media policy that both complies with the First Amendment and helps you address threats, abuse, and harassment."