Arpaio lost his re-election bid in 2016 and was later convicted of criminal contempt by a federal judge. 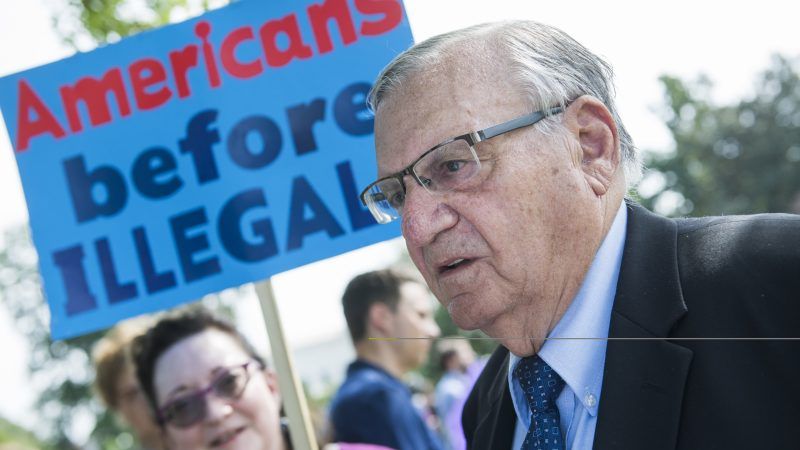 "Thousands want me to run for Sheriff," Arpaio, 87, announced in a tweet Sunday. "Ready for bruising, bitter campaign. Never back down."

Arpaio was first elected sheriff of Maricopa County, Arizona, in 1993 and held the office until he was defeated in 2016. He styled himself as "the toughest sheriff in America" and became known for his "tent city" jail, where inmates wearing old-timey striped uniforms were held in tents in the brutal desert heat.

He was also notorious for using large-scale sweeps of Latino neighborhoods and traffic stops of Latino drivers to round up illegal immigrants. The sweeps drained resources from his department and were abhorred by civil liberties advocates and immigration groups, but they brought the publicity-seeking sheriff to national attention.

In a statement accompanying his tweet, Arpaio said he would reopen his tent city jail and resume immigration enforcement.

"I will continue to stand and fight to do the right thing for Arizona and America, and will never surrender," Arpaio said in the statement. "Those who break the law will have to deal with this Sheriff."

In 2011, the Justice Department's Civil Rights Division released a report finding that the Maricopa County Sheriff's Office "engages in racial profiling of Latinos; unlawfully stops, detains, and arrests Latinos; and unlawfully retaliates against individuals who complain about or criticize MCSO's policies or practices."

For the next five years, Arpaio continued to flout orders by federal judges to improve the conditions inside his jails and cease the unconstitutional racial profiling of Latinos, leading to him being found guilty of both civil and criminal contempt of court in 2017.

Arpaio was also a vocal Trump supporter, and a month after his conviction, Trump returned the favor and pardoned Arpaio. I wrote then:

In pardoning Arpaio, Trump has given a free pass to an unrepentant and habitual abuser of power, a man with insufficient regard for the Constitution he swore to uphold or the separation of powers it enshrines. The move should come as no surprise. The two are kindred spirits.

Arpaio is quite sensitive about his problems with federal judges. Conservative attorney and noted dunce Larry Klayman filed a defamation lawsuit on Arpaio's behalf against CNN and several other news outlets seeking $300 million in damages after the outlets labeled him a "convicted felon." (Arpaio's contempt offense was a misdemeanor, not a felony.)

In addition to unconstitutional immigration sweeps, Arpaio's 24 years as sheriff were marred by numerous cases of brutality and misconduct, abuses of power, retaliation, and cover-ups.

In 2007, Maricopa County's board of supervisors settled a lawsuit filed by the founders of the Phoenix New Times newspaper against Arpaio and the board for $3.5 million. The newspapers' founders sued after they were arrested by MCSO deputies for publishing details of a grand jury subpoena for the paper's notes and sources for its coverage of Arpaio. The charges against the newspaper were quickly dropped.

In 2014, J.D. Tuccille noted in Reason that Arpaio's office "has also been guilty of a litany of shenanigans, including stealing documents from a defense attorney, arresting critical journalists, spying on political opponents—and maintaining such lousy jail conditions that they violate inmates' rights."

In 2016, after years of scandals and millions upon millions of dollars in lawsuit settlements, voters replaced Arpaio with a Democrat candidate buoyed by large infusions of cash from a super PAC connected to liberal megadonor George Soros.

"Tonight, the people have spoken," Arpaio said in a campaign statement following his 2016 defeat. "And while Ava and I are disappointed in the results we respect their decision."