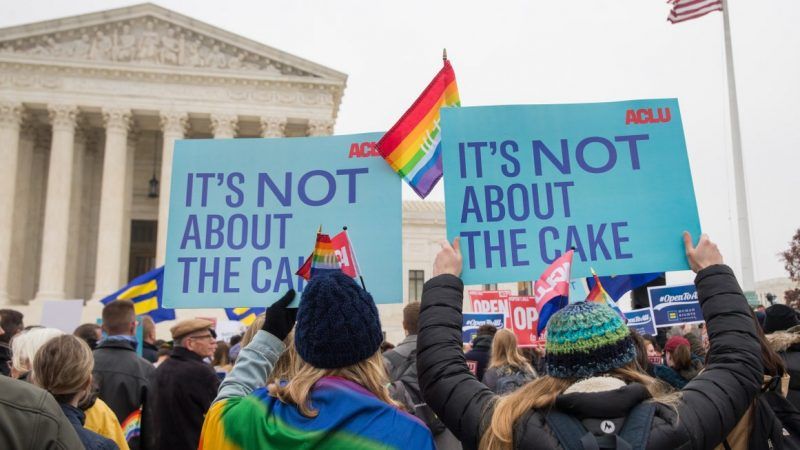 The Justice Department has submitted a brief to the Supreme Court arguing that federal civil rights laws do not protect workers against discrimination on the basis of sexual orientation or gender identity.

This is not a surprise. The Department of Justice has taken this stance since 2017, when it formally ended its Obama-era position that federal law does in fact prohibit such discrimination. But the department's amicus brief, submitted on Friday, has produced a burst of news coverage for the issue.

In the years following that precedent, we've seen further legal analysis of what it means to discriminate on the basis of sex "stereotypes," and that has led to some conflicts of opinion on the federal level. Some courts have held that discriminating against a person for being transgender is the same as discriminating on the basis of stereotypes of how men and women are supposed to look and dress. Under President Barack Obama, the Justice Department agreed with this interpretation, leading to a guidance from his administration that public schools could not force transgender students to use the facilities that matched their birth sex.

Under President Donald Trump, this Justice Department quickly reversed this position, determining that the Civil Rights Act's definition of "sex" did not include sexual orientation or gender identity. Meanwhile, the federal Equal Employment Opportunity Commission still supports the Obama administration's reading. The nation's top court has resisted weighing in until this year, leaving conflicting rulings and positions in place.

There's been some misleading coverage of what's happening here. One Buzzfeed headline—"The Trump Administration Asked The Supreme Court To Legalize Firing Workers Simply Being Gay"—is particularly egregious. The Justice Department is not asking the Supreme Court for permission to fire people for being gay. It's arguing that the current federal law doesn't protect against anti-LGBT discrimination and that these firing decisions are already currently legal.

The case is fundamentally not about whether it should be legal to fire people for being gay or transgender; it's about how far a law's meaning can be stretched before it no longer represents what those who passed it intended. It's very clear that Congress did not intend to include gay and transgender people at the time. This was five years before the Stonewall Riots, at a time when the federal government was purging gay employees and when most politicians believed that gays were mentally ill sexual predators.

Furthermore, as the Justice Department notes in its brief, lawmakers have been trying for years—all the way back to 1974—to add sexual orientation and gender identity to the Civil Rights Act. Congress started getting closer in 2013, when the Employment Non-Discrimination Act (ENDA) made it through the Senate and died in the House. But then that morphed into a new bill called the Equality Act, which includes ENDA but also dramatically increases the definition of "public accommodation" in its regulations against customer discrimination to include just about every single consumer business.

That means the federal government would be able to take action against just about any business in the country accused of discrimination against customers, not just certain types of venues, such as hotels, restaurants, gas stations, and clubs. The expansion of ENDA into the Equality Act probably makes it radioactive for any number of conservatives who might have otherwise have come to support ENDA. (A cynic might wonder if that is the point.)

Some of the same folks who support the Equality Act also want the Supreme Court to find that the Civil Rights Act already protects against LGBT discrimination. The American Civil Liberties Union is assisting the plaintiff in one of the cases that the Court is considering, while at the same time lobbying for the passage of the Equality Act.

It's easy to understand the political logic here—you want to cover all your bases and not just pin your hopes on one path or the other. But it's still contradictory. If an ALCU lawyer is arguing before the court, you should expect a justice to ask why the organization is arguing that the Civil Rights Act already protects against anti-LGBT discrimination while at the same time lobbying for reforms to the law so that it will protect against anti-LGBT discrimination.

Given the current makeup of the Supreme Court, I predict a ruling that sides with the Justice Department. Again, a cynic might wonder if that's partly the point. An adverse ruling here could serve as a helpful election-year rallying point, with the Democratic base coming out to push for a Democratic president and Senate able to pass the Equality Act and change the balance of the Court.

I've said my own piece about the Equality Act: I think the cultural shift toward LGBT acceptance makes additional federal regulations unnecessary, because while discrimination still exists, it's not as widespread or as oppressive as it once was.

The Supreme Court is scheduled to hear oral arguments on October 8.