Free Speech on the Internet Continues to Confuse Everyone

Plus: 8chan called before Congress, data privacy bill hits a snag, and more... 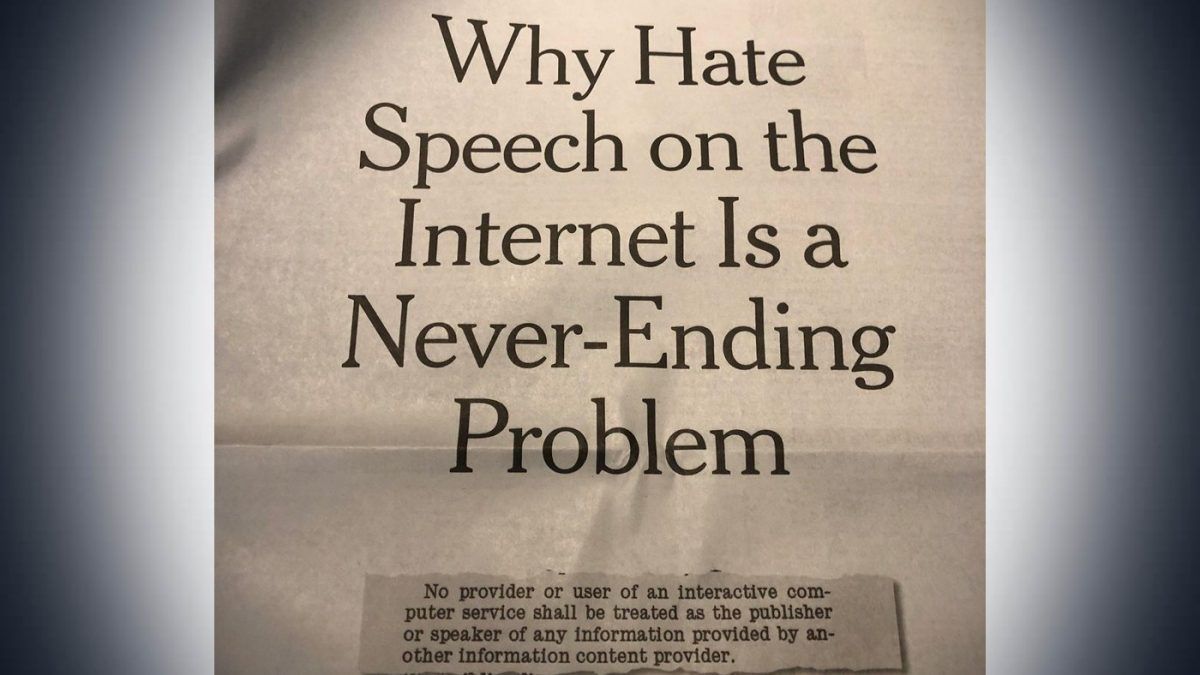 There's a lot of weird and bad information these days about the federal law known as Section 230. The New York Times even put out an op-ed trying to fight the common myth that social media companies are "platforms" that lose legal protections provided by Section 230 if they start making editorial decisions like "publishers." (In reality, the law makes no distinction and requires no such neutrality.) Nonetheless, the Times has started spreading its own extremely misguided analysis of the law. So misguided that the paper was forced to issue a correction, after running a headline on the front page of Tuesday's business section claiming that Section 230 legalized hate speech and was why "hate speech on the internet is a never-ending problem."

On Tuesday afternoon, Times writer Daisuke Wakabayashi tweeted "Disclosure: We are correcting this story and headline because it incorrectly suggests that Section 230 protects hate speech. The first amendment already does that."

Tech lawyers and others have been deservedly dragging the paper:

Have you ever considered using lawyers who actually work with Section 230 or who, like me, were there when it was created, as sources? Just a suggestion. I return calls.

This may be the most shameful day in the history of the New York Times. This is the full front page of the business section today. This would be embarrassing as an editorial. As a supposed piece of reporting it is outrageous. pic.twitter.com/tUgWiGvMqe

There are three stories here covering the full page, all of which suggest that section 230 is responsible for hate speech and sites like 8chan, when in fact the opposite is closer to the truth. But the real outrage is the headline. This is editorializing, and wrong at that

It's not just the headline. There is no liability in the US for carrying hate speech, so 230 immunity is irrelevant. And it is CDA 230 that lets platforms censor hate speech without incurring liability for exercising editorial control. CDA 230 helps control hate speech.

Everyone say it with me: 230 does not *give* platforms a liability shield for user generated content. They already had that. It clarifies that they don't *incur* liability by choosing to moderate that content.

But correcting blatantly wrong (and suspiciously bad faith) tech analysis is like playing whack-a-mole these days. Today, The Wall Street Journal lets Dennis Prager do his own misrepresentations of Section 230:

This is embarassing, and WSJ should be embarassed for printing it. "Opinion" is not a license to lie to readers about basic facts, which this does, repeatedly. The Journal should print a retraction. https://t.co/jMjEYepQLg

Meanwhile, 8chan is the latest tech company to have its creator summoned to testify before Congress.

A "data privacy" bill before Congress is being held up over different priorities between Republicans and Democrats. Sen. Maria Cantwell (D–Wash.) was circulating "a privacy framework that would allow consumers to sue companies for mishandling their data. That 'private right of action' is a non-starter for industry and Republicans," reports The Hill. More:

Other prominent sticking points in the negotiations have included the Republican push to include preemption, which would allow the federal law to override state laws. Preemption has been a top priority for the tech industry, which has warned against a "patchwork" of state laws, but Democrats insist they won't approve any law that is weaker than the California one.

"We believe that having one standard is important," Sen. John Thune (R–S.D.), a member of the Senate privacy working group and GOP majority whip, told The Hill. "And of course, the Democrats have their priorities in this as well.

The makers of Arizona Iced Tea are getting into weed. From The Wall Street Journal:

Arizona Beverage Co. has reached a licensing deal with Dixie Brands Inc., a Denver-based cannabis company that makes and sells weed vaporizers, candies, drinks, tinctures and topical creams in five U.S. states. Under the agreement, Dixie will manufacture the products and sell them through licensed dispensaries. The deal, which is subject to approval by Dixie's board, also gives Arizona the right to buy a stake of up to $10 million in the cannabis company.

Plans for the Arizona line are in the early stages. It is likely to start with vape pens and gummies, followed by a variety of beverages that could include tea, lemonade, soda, coffee or seltzer, officials said. Dixie intends to launch the line in the U.S., then expand it to Canada and Latin America.

Mike Gravel has dropped out of the 2020 race:

Of course, this was not a "campaign" in the strict sense: we never wanted to win, and always made that clear. The campaign wasn't about Mike as much as it was in his honor—it was a crowdsourced and intimately democratic project, about ideas rather than individuals.

Meanwhile, Trump is at war with Democratic candidate Beto O'Rourke:

Beto (phony name to indicate Hispanic heritage) O'Rourke, who is embarrassed by my last visit to the Great State of Texas, where I trounced him, and is now even more embarrassed by polling at 1% in the Democrat Primary, should respect the victims & law enforcement - & be quiet!

And some reassessments of the 2020 Democrats after their last debate:

(Now the question is: will that help her to strengthen her standing in the primary, either temporarily or in the long term?) pic.twitter.com/YvyGLy2ADu