Don't worry about China's currency manipulation. It only hurts China's own people, and benefits American consumers and businesses. 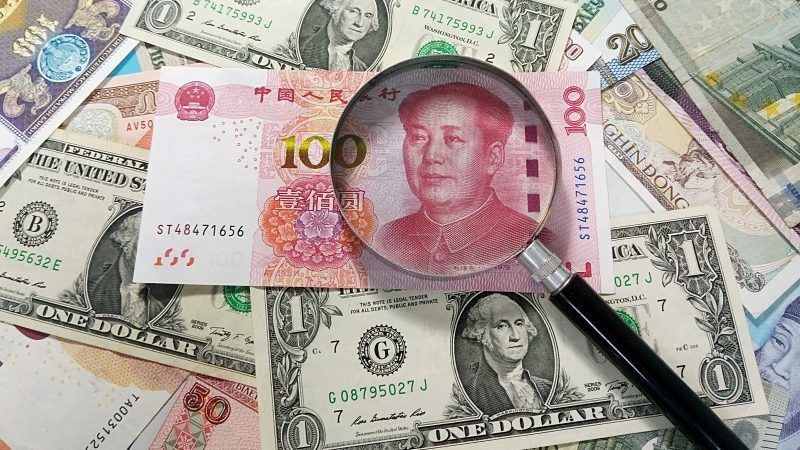 If you want a quick glimpse into the up-is-down, right-is-left world of the United States-China trade war, look no further than something Bloomberg's Saleha Mohsin wrote Monday.

Referring to comments that Treasury Secretary Steve Mnuchin made in June, Mohsin wrote that the Trump administration believed "China was intervening in currency markets to prop up the yuan, and warned it could be designated a manipulator if it stopped."

Read that again. China "could be designated a manipulator if it stopped" artificially propping up its currency.

Indeed, that's exactly what happened on Monday. In response to a renewed threat from Trump to hit Chinese-made goods with tariffs, the Chinese government hit back in part by doing…nothing. China simply allowed the yuan to fall—as it would have, naturally, on the back of the news that the trade war between the U.S. and China was ramping up.

In return, Mnuchin issued a statement accusing China of having taken "concrete steps to devalue its currency"—even though the real culprit for the yuan's slide is a lack of artificial support, not a deliberate devaluation—and the United States officially declared China to be a "currency manipulator."

It's not that the label isn't accurate. China has been manipulating value of the yuan for years—decades, really—as a way to make exports from China more attractive to foreign buyers, and to avoid slipping into recession during economic downturns. Most of those interventions took place between 2003 and 2014, and China has largely stopped trying to influence the value of the yuan in recent years. Letting the yuan fall on Monday wasn't an act of currency manipulation. It was the exact opposite, although China did take action on Tuesday to limit the yuan's slide.*

"As global uncertainty stokes demand for dollars, the certainty of U.S. tariffs on Chinese-originating goods further reduces demand for Chinese yuan, exacerbating the downward pressure on the price of yuan in dollars," explains Dan Ikenson, director of trade policy studies at the Cato Institute. "The People's Bank of China observing the value of the yuan plummet as markets respond to Trump's tariff frenzy is not currency manipulation."

Writing at Forbes, Ikenson pointed out that the Chinese government has burned through more than $1 trillion trying to keep the yuan from falling as the trade war has taken its toll. Sooner or later, letting the currency fall was almost inevitable.

So this looks like a win for the Trump administration, right? Finally, the trade war is exacting enough of a toll on China that the Chinese government will have to stop propping up its currency—something that Trump believes gives China an unfair advantage.

Except, well, that's almost completely wrong. Propping up its own currency actually does very little to help China. Who benefits from China's artificially high yuan? Americans.

In other words, the United States took actions against China with the intention of causing the yuan to lose value—despite the fact that an artificially high yuan is beneficial to U.S. consumers and businesses—and then labeled China a currency manipulator when it stopped manipulating its currency so the yuan could fall in value in response to economic actions designed to create that outcome.

The bottom line is that the act of calling China a currency manipulator doesn't mean a whole lot in practical terms. But it does pave the way for the Trump administration to open another front in the trade war and, probably more importantly, it continues to erode the trust between the governments of the world's two largest economies. That's why markets reacted poorly yesterday, and why some analysts say the prospect of a global recession is rising. That, and the fact that the ongoing trade and currency war with China is being conducted by a president who doesn't seem to know whether it's better to have a weak dollar or a strong one.

So it's probably no wonder things seem a bit topsy-turvy right now.

"With the Trump administration threatening to stop Beijing's alleged currency manipulation, and Beijing resisting," Boudreaux wrote back in 2017, "it's as if the Trump administration believes itself to be charged with the responsibility of protecting the welfare of the Chinese people at the expense of American citizens, while the government in Beijing plays the role of benefactor of the American people at the expense of Chinese citizens."

*This post has been updated to clarify China's currency manipulation practices.