The Debate Hecklers Were Right; the Officer Who Killed Eric Garner Should Be Punished 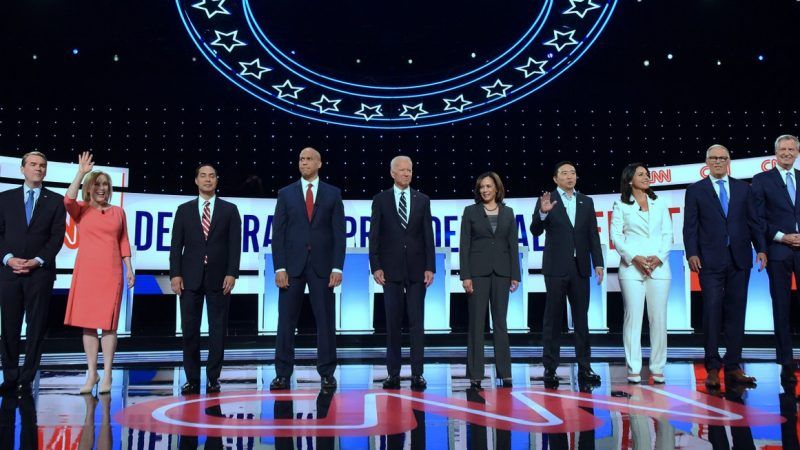 When New York Mayor Bill de Blasio gave his opening speech at tonight's Democratic primary debate, there was a brief shout from somebody in the audience. It was hard to decipher, but it became clear that the mayor was being heckled when Sen. Cory Booker (D–N.J.) gave his opening statement, only to be interrupted with chants of "Fire Pantaleo!"

The target wasn't Booker. It was de Blasio. NYPD Officer Daniel Pantaleo was the man responsible for the aggressive chokehold that led to the death of Eric Garner five years ago. The takedown of Garner—police were responding to a call about a fight, suspected Garner of selling loose cigarettes, and attempted to arrest him—became a national rallying point to demand police accountability.

But so far nothing has come of it. A grand jury declined to charge Pantaleo, and this month the Department of Justice decided it would not file federal civil rights charges in Garner's death. New York City has finally begun administrative proceedings to decide whether to discipline or fire Pantaleo at all. There is anger among not a few folks in New York about the foot-dragging. Hence the heckling.

Much later in the debate, the moderators asked Julián Castro, former secretary of housing and urban development under President Barack Obama, about whether Pantaleo should still be serving. Castro bluntly said that the officer should be fired. "He knew what he was doing….He should have been off the street." The audience responded with very loud cheers.

Sen. Kirsten Gillibrand (D–N.Y.) agreed. She said that she's met with Garner's mother and added, "If I was mayor, I'd fire him."

De Blasio, given the chance to respond, deflected responsibility to the federal Department of Justice. He claimed that the department told New York City that he could not act on Pantaleo's behavior because of the federal investigation. That is not true. De Blasio was asked to refrain from acting during their investigation, but he was not ordered to keep Pantaleo on the force. And, in fact, the city actually finally went ahead and began administrative proceedings against Pantaleo before the Justice Department formally announced they were not pressing charges.

On Twitter, de Blasio responded to the heckling by vaguely saying he "heard" the protesters, understood their pain, but believed in "respecting the process":

While I believe that respecting the process is the best way to get justice for Eric Garner's family, I recognize and identify with the pain people across this country are feeling. #DemDebate

Unfortunately for Garner's family, the "process" is dominated by deference to police union agreements that make it hard to fire bad cops, that shield them from accountability, and that keep individual officers' histories of misconduct a secret from the public. We might not even know what sort of discipline, if any, is ultimately handed down in the case.

De Blasio also spent a lot of the debate declaring his own support for union influence over domestic policy. The process that has kept Pantaleo on the force appears to be one that de Blasio supports.

De Blasio also said that there would "never be another Eric Garner." Given that he has, since Garner's death, increased the price of cigarettes in New York City even further, fostering the black market that led police to arrest the man, he is in no position to make such a promise.