Cannabidiol products are legal for sale and consumption, but adding it to other things is somehow forbidden. 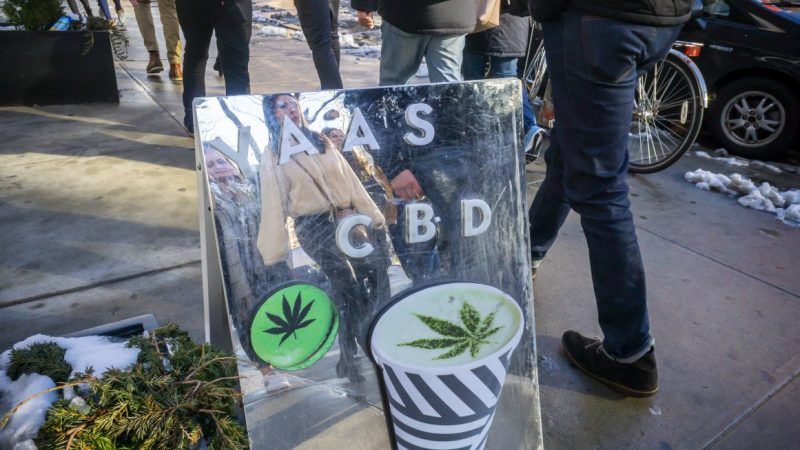 A cafe on the Lower East Side in New York advertises the availability of CBD infused beverages on its menu. (Richard B. Levine/Newscom)

New York City's health department is implementing a ban on cannabidiol (CBD) additives in food and drinks, dismaying not just restaurant and café owners but even members of City Council.

Way back in February, city health officials surprised a number of bakeries, restaurants, coffee shops, and food vendors by telling them that CBD derivatives—made from the non-psychoactive components of cannabis—were not permitted in food and drinks. At that point, many places had already begun selling food with the trendy infusions. After businesses expressed their surprise at the sudden announcement, the city's health department agreed to delay enforcement until July.

Now the ban on CBD edibles is officially in effect, and fines of up to $600 per incident may start in October. The city's justification, according to Gothamist, is that the Food and Drug Administration (FDA) says CBD food additives are illegal under federal law. But the Department of Health is a city agency, not an enforcement mechanism of the federal government. Many observers suspect that local law enforcement agencies and prosecutors are pointing to federal law as an excuse to keep enforcing cannabis bans as states and localities legalize marijuana use.

Some members of the New York City Council, including Speaker Corey Johnson, plan to put together legislation to stop the health department from imposing fines. That itself says a lot about the misbegotten way New York City sometimes operates. The City Council needs to pass a law to stop an administrative department from implementing fines that the council never authorized? Who exactly are the lawmakers here?

City Council member Mark Levine expressed his frustration to Gothamist. "I was very concerned about the impact and confusion it would cause on small businesses and their customers," he said. And now that there's a move on the state level to develop regulations for the legal use of CBD, he added, the "ban seems like it is even more premature."

CBD products themselves are legal in New York City; they just become illegal by virtue of being added to food. It's an absurd policy that has had economic consequences—one business owner stopped plans to open a café to sell CBD-infused treats. Another coffee shop will stop adding CBD-infused shots to their drinks, but will sell the CBD products on the side so customers can add them instead.

The Department of Health has said that part of the problem is the government has not deemed CBD to be safe. Over at The Cut, Amanda Arnold claims the "reasoning behind the policy does, admittedly, make sense: Despite being infused in everything from brownies to lavender lattes to gummies these days, the oil has not officially been deemed safe for human consumption." But no, that reasoning does not make sense. We shouldn't have to prove to the government that CBD is safe to consume. It should be up to the government to show that it is not safe in order to justify a ban.

Read more from Reason's Mike Riggs here about the current trendiness of CBD, the science behind what it does and does not do, and its confusing legal status.