Two Solar Companies Said Tariffs Would Save Their Businesses. They Went Broke Anyway.

Who could have seen that coming? Well, lots of people did—but the U.S. International Trade Commission and President Trump didn't listen. 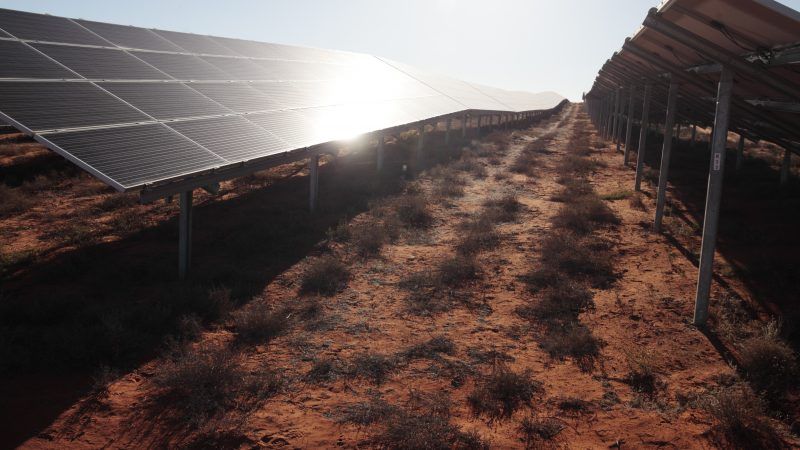 When the Trump administration slapped tariffs on imported solar panels in early 2018—one of the first volleys in what would become a much wider trade war—it did so at the explicit request of two American solar panel manufacturers.

In their joint petition to the U.S. International Trade Commission (ITC), solar panel manufacturers Suniva and SolarWorld argued that Chinese-made solar panels were a "substantial cause of serious injury" to their businesses. They asked the commission to recommend tariffs in order to "stop the bleeding" and promised that protectionism would result in 114,000 new American jobs. The idea was that cheaper, imported solar panels were undercutting domestic producers and forcing them to go out of business or shift production abroad—more or less the same theory the Trump administration subsequently applied to impose other tariffs.

The solar panel manufacturers got what they wanted. In January 2018, President Donald Trump approved new 30 percent tariffs on imported solar panels to little fanfare—though Reason's Ron Bailey noted the tariffs and predicted that "the Trump administration's new tariffs will not save or create more American jobs; it will do the opposite."

Eighteen months later, both Suniva and SolarWorld are out of businesses.

"SolarWorld Americas, actually a US subsidiary of a German company, was bought out of bankruptcy by SunPower in October. Chinese-owned Suniva filed for bankruptcy this month," Quartz' Michael J. Coren reports. "The company told a judge it plans to exit the solar panel business as soon as it offloads its inventory of panels stockpiled in warehouses."

Who could have seen that coming? Well, lots of people did—but the ITC and the Trump administration didn't listen.

In a filing to the ITC opposing the plan to put tariffs on solar panels, the Solar Energy Industries Association (SEIA) warned in September 2017 that tariffs would have little benefit for domestic solar panel manufacturers. In fact, the SEIA predicted, the tariffs would do more harm than good, since they would trigger price increases that could reverberate through the rest of the industry as higher prices limited demand.

"While tariffs in this case will not create adequate cell or module manufacturing to meet U.S. demand, or keep foreign-owned Suniva and SolarWorld afloat, they will create a crisis in a part of our economy that has been thriving, which will ultimately cost tens of thousands of hard-working, blue-collar Americans their jobs," SEIA President Abigail Hopper told Utility Dive, an industry newsletter,  when the tariffs were announced in January 2018.

At the same time, the Trump administration also announced tariffs on imported washing machines—at the request of Whirlpool and other American-based appliance manufacturers.

That story ended pretty much the same way. After initially celebrating the new tariffs, Whirlpool saw its share prices tumble 15 percent over the next six months while the company's revenue fell well short of expectations as consumers were soaked with higher prices.

All told, the washing machine tariffs raised about $82 million for the U.S. Treasury but ended up increasing costs for consumers by about $1.2 billion during 2018, as the economists Aaron Flaaen, Ali Hortacsu, and Felix Tintelnot concluded in a paper released in April. Although the trade policy did cause some manufacturers to shift production from overseas to the United States in an effort to avoid the new tariffs, the 1,800 jobs created by Trump's washing machine tariffs cost consumers an estimated $820,000 per job.

And, for good measure, the prices of un-tariffed clothes dryers increased too—since they are usually bought together with washing machines, retailers took the opportunity to hike those prices as well.

Trump's more high-profile tariffs haven't exactly worked out as planned either. American steelmakers are reducing production because higher prices created by tariffs have reduced demand. Meanwhile, consumers and steel-consuming businesses have paid an estimated $650,000 for every steel job created or saved by Trump's tariffs, according to an analysis by the Peterson Institute for International Economics.

It's enough to make you wonder if maybe the federal government isn't very good at this whole protectionist/central planning/economic nationalism thing.