In a new report, the Treasury Department declares it will begin scrutinizing any nation that runs a bilateral trade imbalance of more than $40 billion with the United States 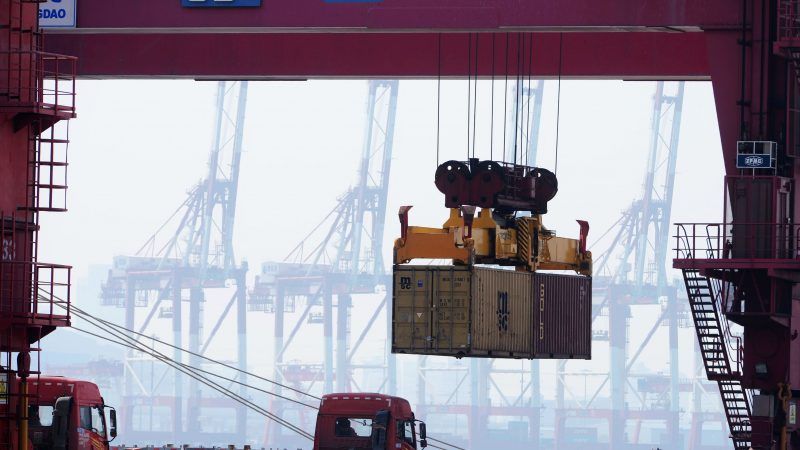 President Donald Trump's basic misunderstanding of America's trade deficits will continue to haunt American taxpayers after he leaves office thanks to changes made this year to a little-noticed Treasury Department report.

The Treasury Department's annual report to Congress on "Macroeconomic and Foreign Exchange Policies of Major Trading Partners of the United States" is supposed to alert elected officials to currency manipulation conducted by governments in places where American companies do a lot of business, but as this year's report notes, "there has been a decline in the scale and persistence" of that sort of behavior.

The Trump administration, however, has found a new way to make the study relevant. "Starting with this report," the Treasury says it will expand its investigations "to monitor for external imbalances" in trade. Specifically, the report will scrutinize any U.S. trading partner that runs an annual trade imbalance with the United States of more than $40 billion—a list that includes not only China but also key allies like Japan, South Korea, Germany, Italy, and Ireland.

There's nothing inherently wrong with the Treasury Department rounding up a list of America's trading partners and noting which ones run a goods surplus of more than $40 billion, of course. But the language suggests data-gathering is not the endgame.

"The Treasury Department is working vigorously to achieve stronger growth and to ensure that trade expands in a way that helps U.S. workers and firms and protects them from unfair foreign trade practices," Treasury Secretary Steven T. Mnuchin said in a statement accompanying the release of the report late last month. The report itself echoes that economic nationalism. "Treasury will continue to press major U.S. trading partners that have maintained large and persistent external surpluses to support stronger and more balanced global growth…while durably avoiding foreign exchange and trade policies that facilitate unfair competitive advantage," reads part of the executive summary.

And the real problem here is that it's all based on Trump's faulty conviction that trade deficits matter—when they really don't.

"By this document the Treasury is institutionalizing nuttiness," writes John Cochrane, an economist and Senior Fellow of the Hoover Institution at Stanford University.

To understand why trade deficits don't matter, Cochrane outlines a simple exercise. Imagine three nations trading with one another—Australia, China, and the United States. America buys $1 million in shoes from China, Australia buys $1 million in airplanes from America, and China buys $1 million in coal from Australia. All three nations are now running $1 million bilateral trade deficits with one of their partners, but all three are better off. "Bilateral trade 'deficits' are meaningless," Cochrane writes. "In quotes as this is a horrible word too, implying something is deficient every time you go to the Starbucks and suffer a coffee trade 'deficit.'"

Don Boudreaux, an economist at the Mercatus Center at George Mason University, says the report's focus on bilateral trade deficits is "completely untethered to economic reality." In an interview this week with Reason, he compared the Treasury Department's scrutiny of bilateral trade deficits to astrophysicists giving serious consideration to a geocentric model of the solar system.

But such is the gravitational pull of Trump-style economic nationalism, which posits that trade deficits are proof other countries are taking advantage of the United States.

Peter Navarro, Trump's top trade advisor, argued in a recent Wall Street Journal op-ed that lowering America's trade deficit would boost growth. In fact, no such correlation seems to exist for other countries around the world. As I've previously written:

On the first page, the report highlights how the United States' trade deficit with China grew to a record high of $419 billion in 2018. "A key driver of this increase was a sharp decline in U.S. exports to China in the fourth quarter of 2018, a time when U.S. imports from China were sustained," the report says.

The fourth quarter of 2018, of course, is the first full quarter after Trump imposed two rounds of tariffs on Chinese imports—the first in July and the second, larger set in August—with the expressed intent of reducing America's trade deficit. The opposite occurred.

As developments in the trade war go, this is not an earth-shattering one. But it's a good example of how the Trump presidency is institutionalizing a worldview that's at odds with free trade. Like how civil liberties violations under George W. Bush paved the way for worse ones under Barack Obama, this is exactly how new ideas worm their way into the executive branch's ongoing perception of its role in the economy and the world at large. Presidential administrations don't end when the guy in charge exits the White House for the last time.