What's the point of a "limited government" bloc that doesn't limit government? 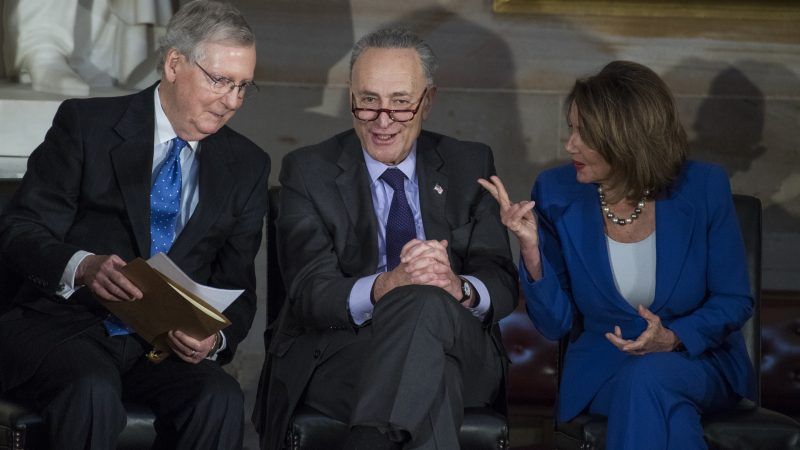 Unless you are a Washington obsessive, you may have missed the news that bipartisan leaders of both houses of Congress are on the verge of agreeing—as soon as today—on a two-year budget deal that waves away the debt ceiling and lifts whatever spending caps that would theoretically go into effect if by some crazy chance the two parties can't agree to spend more of your children's money.

This quiet backroom negotiation between the House and Senate majority and minority leaders, along with Treasury Secretary Steven Mnuchin and White House Chief of Staff Mick Mulvaney, is in stark contrast to the Tea Party–influenced budget/deficit/debt-ceiling wars of 2009–2014, which were animated by alarm at trillion-dollar deficits, unsustainable entitlements, and a national debt that had recently doubled.

Since those days, and despite the infusion of new fiscal hawks such as Rep. Justin Amash (R–Mich.), the federal government has returned to trillion-dollar deficits, entitlements are even more unsustainable (with reforms nowhere visible on the horizon), and the debt has doubled once more. There is no appetite, from the president on down, for doing anything except spending more borrowed money, forever.

Forget last night's petty Freedom Caucus (HFC) rebuke of co-founder Amash for saying out loud what many Republicans no doubt think about President Trump—this latest low-key budget travesty, and the smooth congressional sailing it will no doubt face, is reason enough for the once-vaunted bloc to pack it in. "We support open, accountable and limited government," the HFC mission statement promised in 2015. But that directive gets less fun when the president's a Republican, too.

Mulvaney, himself one of nine co-founders of the Caucus, is a prime cautionary tale about the compromises of power. In March 2015, as I pointed out in this roadmap of GOP fiscal incontinence, Mulvaney wrote a Wall Street Journal op-ed headlined: "The Republican Budget Is a Deficit Bust," which argued that "There is no honest way to justify not paying for spending, no matter how often my fellow Republicans try."

What was Mulvaney's tune just 30 months later as a key economic-policy player in the Trump administration? "We need to have new deficits."

Stay tuned over the coming hours not just for the horrendous dollar amounts, but also the rank insincerity of supposed fiscal conservatives in claiming that, dang it, their hands are tied when it comes to limiting government.

"We're all for trying to rein in spending, but at what cost?" Senate Appropriations Chairman Richard C. Shelby (R–Ala.) told The Washington Post. "And I don't think the president wants to rein in spending at the cost of national security."

The transformation truly started in 2017 when the freedom caucus leadership abandoned spending restraint for the president. But now they're caught up in the Republican Party. Not conservatism. If I told them in 2015 what they'd become in 2019, they wouldn't believe me.