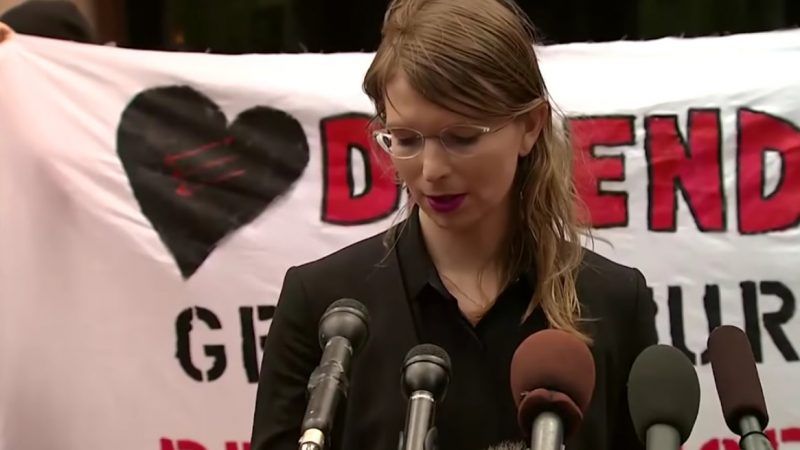 "I will not cooperate with this or any other grand jury," Chelsea Manning told reporters Thursday from outside a federal courthouse in Virginia. She is now back behind bars for this refusal, after being released just last week from 68 days' confinement (much of it in solitary).

U.S. District Court Judge Anthony Trenga hasn't merely ordered Manning back into federal custody. He ruled that Manning must pay for the privilege of having her freedom taken away: $500 per day after 30 days and $1,000 per day after 60 days.

"While coercive financial penalties are commonly assessed against corporate witnesses, which cannot be jailed for contempt, it is less usual to see them used against a human witness," the Sparrow Project points out.

Manning has already served seven years in prison for her 2010 whistleblowing efforts, in which she leaked damning information about U.S. military operations in Afghanistan and Iraq to WikiLeaks. This year, the feds have attempted to haul Manning before two separate grand juries to provide testimony related to these acts.

Both times, Manning has refused, objecting to the secretive nature of the grand jury proceedings. She was forced back into federal detention yesterday, "exactly one week after her release…for refusal to testify before a separate Grand Jury that sought answers to identical questions that were asked of her today," Sparrow Project notes.

In 2010 Chelsea made a principled decision to let the world see the true nature [of] modern asymmetric warfare. It is telling that the United states has always been more concerned with the disclosure of those documents than with the damning substance of the disclosures.

The American government relies on the informed consent of the governed, and the free press is the vigorous mechanism to keep us informed. It is a point of pride for this administration to be publicly hostile to the press. Grand Juries and prosecutions like this one broadcast an expanding threat to the press and function to undermine the integrity of the system according to the government's own laws.

Meltzer-Cohen urged members of the press "to stand up for Chelsea in the same manner she has consistently stood up for the press."

"Nobody should be in jail for smoking marijuana," said 2020 presidential candidate Joe Biden this week.

His campaign spokesperson told CNN that if elected president, Biden would "allow states to continue to make their own choices regarding legalization and would seek to make it easier to conduct research on marijuana's positive and negative health impacts by rescheduling it as a schedule 2 drug."

About that Apple antitrust opinion authored by Justice Brett Kavanaugh… It's had a lot of conservatives in tizzy fits. But "Kavanaugh's decision in Apple is not some harbinger of incipient leftism," writes Will Chamberlain at Human Events:

This is not some grand dispute about the virtues or defects of antitrust law; it's about the meaning of one specific Supreme Court case, and just who should be allowed to sue for an antitrust violation.

The responses to this suggest a depressing number of people find this shocking and outrageous. Folks, this isn't some new idea… it's the core of all modern 4th Amendment law. We throw out evidence from improper searches, even if you were actually doing a crime. https://t.co/18jBrDaU0v

So happy for #Taiwan, the first Asian country to recognize #FreedomToMarry. Congratulations. https://t.co/bweebJs2vt