“Neither de facto [GMO] bans nor mandatory labeling can be justified.” 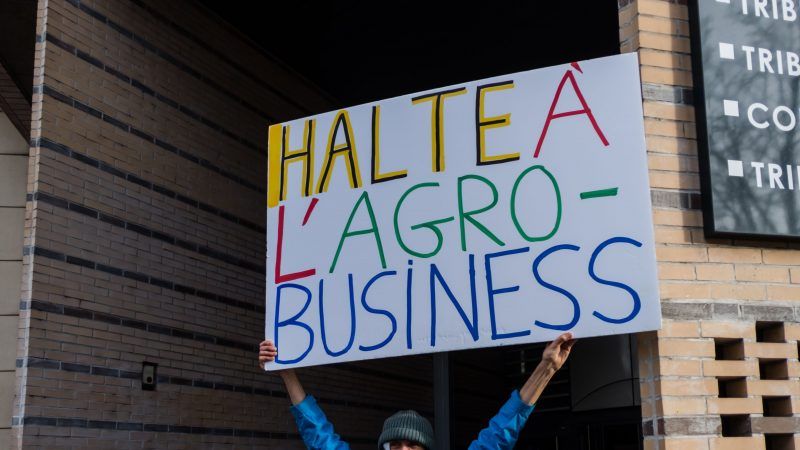 Members of VigilanceOgm21 rallied outside a French courthouse in support of anti-GMO activists who destroyed agricultural products belonging to belonging to Dijon Cereales. (KONRAD K./SIPA/Newscom)

An excellent new paper from a trio of Danish researchers, two of whom are based out of the University of Copenhagen, argues that the European Union's stance on farming with GMO crops is an untenable mess. The paper concludes that "neither de facto [GMO] bans nor mandatory labeling can be justified," and the researchers assert that current E.U. rules—which embrace both de facto bans and mandatory labeling of foods containing GMO ingredients—are backward and "hinder[] agricultural innovation."

In "Are current E.U. policies on GMOs justified?," published in the journal Transgenic Research, the researchers sought to determine whether the most common arguments for restricting GMOs justify the E.U.'s decidedly anti-GMO policies. The authors first explain the current E.U. GMO policies. They then turn to a discussion of the grounds for those policies, including risk mitigation and other stated non-risk justifications for restricting genetic modification or gene editing (such as their purported unnaturalness).

"It is… really difficult to construct a solid argument to the effect that the distinction between natural and unnatural can warrant stricter regulation of GMO's—even if we consider the best philosophical arguments for the value of nature and naturalness," says Andreas Christiansen, a postdoc at the University of Copenhagen and the lead author of the paper.

Farming with GMOs in Europe is a tough row to hoe, as the paper explains. The E.U.'s convoluted "pre-release authorization" process for getting a GMO crop (or food containing GMO ingredients) to market keeps those crops from ever getting there. Even if E.U. food-safety officials authorize a GMO crop as safe to market, the article details, another body, the European Commission, or E.C., can order up more research. If the E.C. ultimately likes what it sees, then it can, in turn, recommend to yet another body, made up of bureaucrats from the various E.U. member states, that they authorize the GMO crop.

That body, the article notes, "has never managed to… reject or approve" any GMO crop since the E.U. rules came into force in 2003. An appeals committee exists but, the paper notes, it too has never broken the deadlock. Though the E.C. ultimately can approve an application anyways, the paper says—and may even be "legally obliged" to do so—in practice that's only happened once.

Last year, the E.U.'s highest court, the Court of Justice of the European Union, ruled that crops produced using a process known as gene editing should be subject to the same overly burdensome rules the E.U. already requires GMO crops to follow.

The gene-editing case involves technology known as CRISPR, which uses a process known as mutagenesis—turning on or off specific DNA that's present naturally in an organism. GMO crops are produced by genetic modification, also known as transgenesis, which involves inserting DNA from one organism into another.

Unlike the E.U., the USDA announced last year that it won't impose any additional regulations on gene-edited crops or foods.

It is against the backdrop of this USDA decision and the widely panned EU. .ruling that the authors of the Transgenic Research article sought to take a critical look at whether those E.U. rules are justified in the first place. They conclude that even "the most popular and cogent arguments for restricting GMOs do not, in general, justify the types of restrictive policies that govern GMOs within the E.U."

In a 2018 piece I wrote for Reason on an awful set of proposed USDA rules intended to regulate GMO food labeling here in the U.S., I blasted the plan and wrote that "even good regulations [are unlikely to] to fully resolve contentious" debates over GMO foods. The USDA's rules, like those in the E.U., are not good regulations.

So just what should regulators do with GMOs? Ideally, very little. As I've stated many times (e.g., here), I care not a lick about GMOs. I am neither pro-GMO nor anti-GMO. I hope that someday governments worldwide will, as a rule, share my indifference.