District Attorney admits "we are not able to prosecute any of those cases and reach our burden of proof beyond a reasonable doubt." 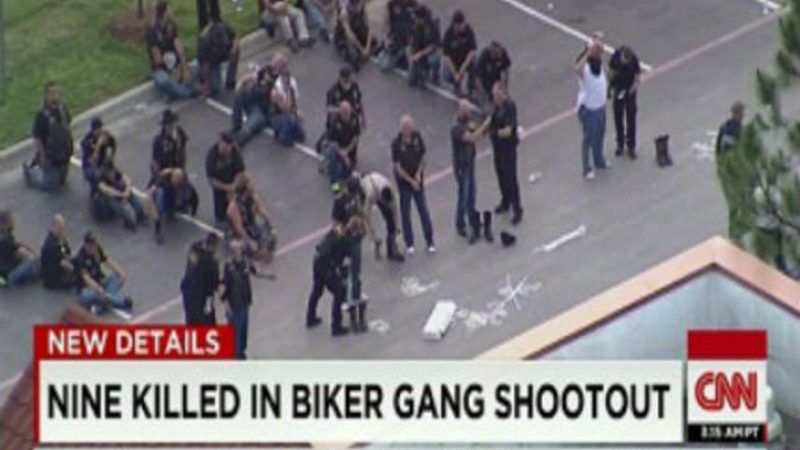 Nearly four years ago, over 170 people were arrested after a chaotic scene outside a meeting of biker clubs at the Twin Peaks restaurant in Waco, Texas,** in which both police and some bikers fired guns and nine people were killed (at least four of them almost certainly by police) and 20 injured. Today, after years of highly questionable prosecutorial practices, the remaining 24 indictments have been dropped. No one will actually end up convicted for any crimes committed that day in May 2015.

Current McLennan County District Attorney Barry Johnson, who inherited the whole mess from former D.A. Abel Reyna, told the Waco Tribune that he spent 75 percent of his time since taking office in January trying to deal with the aftermath, and has concluded "after looking over the 24 cases we were left with, it is my opinion as your district attorney that we are not able to prosecute any of those cases and reach our burden of proof beyond a reasonable doubt."

Despite lacking any sure knowledge of who actually harmed anyone and who was just unlucky enough to be there, 155 people were indicted on the identical charge of "engaging in organized criminal activity" and held on punitively large $1 million bonds.

Despite causing severe harm to many of the arrestees' lives—by either the time they spent in jail or by the indictments hanging over their heads—only one of the indictments ever even went to trial in the intervening years, and that one "ended in mistrial in November 2017, with most of the jurors in his case favoring acquittal," as the Waco Tribune noted.

Reyna himself, in charge during the initial arrests and charges, had already dismissed all but 24 of the cases, and he re-indicted those suspects on different charges. The Tribune also pointed out that some other possible charges were no longer available to the D.A. as the absurdly overlong process in the case pushed them past the three-year statue of limitations.

New D.A. Johnson jabbed at Reyna, who he beat handily in an election last year:

In my opinion, had this action been taken in a timely manner, it would have, and should have, resulted in numerous convictions and prison sentences against many of those who participated in the Twin Peaks brawl. Over the next three years the prior district attorney failed to take that action, for reasons that I do not know to this day.

And the potential costs to the county aren't over yet. As the Waco Tribune reported, "more than 130 of the bikers have civil rights lawsuits pending against Reyna, former Waco Police Chief Brent Stroman, the city of Waco, McLennan County and individual local and state officers who were involved in the arrests."

As attorney Don Tittle, who is representing over 100 such bikers, told the Waco Tribune:

Maybe if law enforcement had stuck with the original plan to focus on individuals who might have been involved in the violence and let the rest of the motorcyclists go after being interviewed, things would have gone differently…. It's hard to imagine that turning the operation into a dragnet wasn't a major distraction for the investigation, not to mention a public that grew increasingly skeptical as this thing played out. All this for an ill-advised attempt to prove an imaginary conspiracy theory, which to this day there's not a shred of evidence to support.

Reason has reported on the case from the beginning, on such elements as the police department's own role in the mayhem it claimed to be quelling, the civil rights implications of the mass arrests on the same generic charge, police attempts to obfuscate evidence, police presence on the grand jury, the absurd punitive nature of the $1 million bonds, the damage to defendants inherent from the start in the mass arrests, and the gradual falling apart of all the indictments over time.

**Correction: The post originally misidentified the location of the incident.