Kamala Harris Says Her Opposition to Marijuana Legalization Is 'Not True.' We Have the Receipts!

For most of the presidential candidate's political career, she was absolutely dead set against full legalization. 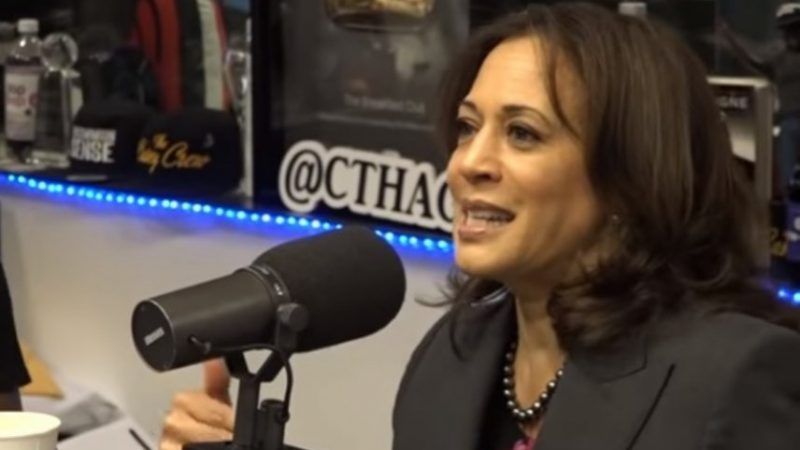 ('The Breakfast Club,' I Heart Radio)

Democratic presidential candidate and California Sen. Kamala Harris stopped by I Heart Radio morning show The Breakfast Club for a chat about her campaign ambitions. She found a friendly questioner in Charlamagne tha God, and they talked at length about the kind of attacks she's been facing over her record as a former prosecutor in San Francisco and the state's attorney general.

Part of the interview appeared to be a bit of straw man attacking, or at least time spent on claims that weren't actual critiques of her record. There's apparently a meme out there that states that Kamala Harris as a prosecutor "set a state record" for prosecuting black men. I can find little evidence of this meme online other than a single picture and a response on Medium from somebody saying that this likely isn't true. California's prison population declined during the time that Harris was attorney general.

There are a lot of legitimate critiques of Harris' background as a prosecutor, so picking the most absurd claim to give her space to hit back on is a little odd. In addition, he lets her weigh in on some absurd claim out there that she's not really black and was raised in Canada. The 44-minute interview does delve into a few more issues, and he gives her space to promote the criminal justice reforms she really does support. She mentions crafting legislation to try to eliminate the use of cash bail in the states—an effort on which she's partnered up with Sen. Rand Paul (R-Ky.) to try to send federal grants to states to research changes.

But then things get truly odd when Charlamagne funnels her into pretty much flat-out deceiving us about her record on marijuana legalization. Here's the clip:

For those who can't watch, Charlamagne says there's a rumor going around that she's against marijuana legalization and she says that's "not true." If you listen carefully, the two of them are circumspect about how they're approaching this. They are talking about Harris' current position on marijuana legalization. She states very clearly that she is in favor of legalizing marijuana.

But that's a significant change of her position in the last 10 years, and the show simply does not grapple with any of it, treating Harris as though she's ahead of the curve on legalization.

She's not. She is playing catch-up and has been publicly supporting legalization for all of a year.

Harris has a lengthy history as a prosecutor in California of opposing marijuana legalization. She opposed Proposition 19, the first failed attempt in California to legalize recreational use of marijuana. Here's a quote from her campaign manager when she was running for attorney general in 2010, when Prop. 19 was on the ballot: "Spending two decades in court rooms, Harris believes that drug selling harms communities. Harris supports the legal use of medicinal marijuana but does not support anything beyond that."

In 2014 she actually laughed at a reporter in response to the very idea (pushed by her Republican opponent) of legalized recreational use.

For almost the entirety of Harris' political career, she has been against legalizing pot. Like a lot of politicians, she has only recently come around to recognize the reality that whatever damage marijuana use might cause pales in comparison to the harms created by the government enforcing marijuana laws.

It's not all that much different from various Democratic leaders coming around over the past decade to support same-sex marriage recognition. The issue here in this interview is that Harris is clearly wanting to present herself as being some sort of cutting edge candidate (she admits to smoking pot once in college) when her actual record on marijuana is anything but.

For an actual critique of Harris' record that doesn't rely on random memes, check out Reason TV's recent analysis. This is the stuff that people are actually thinking about before deciding whether to cast a vote for her:

Watch the full interview with The Breakfast Club here.