The tech giant appears willing to do almost anything to win access to the vast Chinese market. 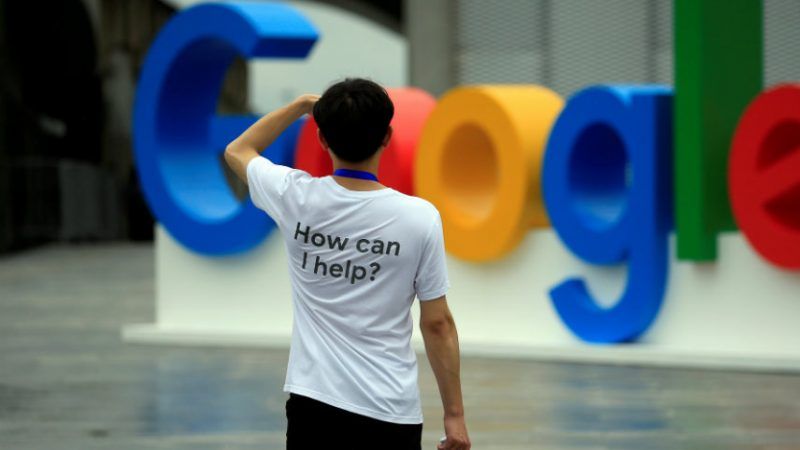 Tech giants get a lot of well-deserved flack for playing at partisan politics, picking sides in policy disputes, and suppressing speech and ideas that don't fit well with their dominant political ideology—or promoting those that do. Even some of the companies' employees' find the internal culture stifling, such as the Facebook workers who recently derided the social media behemoth for "a political monoculture that's intolerant of different views." But for a glimpse of real danger, consider what happens when Google, the dominant search-engine company, teams up with a regime it apparently finds agreeable, and lends its considerable clout to reinforcing authoritarian rulers' control over their suffering subjects.

Google left China in 2010 after realizing that there was no end to the demands and intrusions the government would make, no matter how the tech firm tried to comply. But now the company appears willing to do almost anything asked to win access to the vast market. And what's being asked of the company is that it help the government control its people.

A "memo, authored by a Google engineer who was asked to work on the project, disclosed that the search system, codenamed Dragonfly, would require users to log in to perform searches, track their location—and share the resulting history with a Chinese partner who would have 'unilateral access' to the data," The Intercept reports about a new search engine Google is developing for China.

Unsurprisingly, the results delivered by the new search engine will be as considerate of state demands as are its tracking capabilities. Dragonfly will serve up only fare approved by government officials, according to the Intercept's Ryan Gallagher.

When a person carries out a search, banned websites will be removed from the first page of results, and a disclaimer will be displayed stating that "some results may have been removed due to statutory requirements." Examples cited in the documents of websites that will be subject to the censorship include those of British news broadcaster BBC and the online encyclopedia Wikipedia.

And some queries are considered so sensitive that they'll return no results at all—though users' interest in pursuing forbidden paths of inquiry will certainly become part of their permanent record. That's no joke in a country that's rapidly modernizing the hoary old mechanisms of the police state with a modern "social credit" system that can effectively place people under house arrest with nary a trench coat in sight.

"A poor Chinese social credit score can lead to bans from travel, certain schools, luxury hotels, government positions, and even dating apps," notes the Brookings Institution. Liu Hu, an investigative journalist, incurred the Chinese government's wrath for exposing corruption among Communist Party officials. He's among millions who have been punished with a tanked social credit score that prevents him from easily working or even leaving his hometown.

I suspect that a few officially disfavored internet searches on topics like "Tianenmen Square" could easily ding a social credit score, and a person's life. Google is happily dedicating hundreds of employees to making that nightmare become a reality.

China is a massive country whose government holds sway over almost a fifth of the world's population. Its policy decisions have a huge impact on human well-being and liberty. For those who hoped that the country's recent emergence from overt totalitarianism was a positive sign, the implementation of a high-tech police state, aided and abetted by a company born in the relative freedom of the United States, is hideously discouraging.

"It will be a dark day for internet freedom if Google has acquiesced to China's extreme censorship rules to gain market access," comments Patrick Poon, China researcher at Amnesty International. "It is impossible to see how such a move is compatible with Google's 'Do the right thing' motto, and we are calling on the company to change course."

A successful move by China to tighten control over information and dissent will have effects far beyond the country's borders. It's likely to be looked upon with envy by other regimes eager to keep their populations on a tight leash.

"Due to my conviction that dissent is fundamental to functioning democracies, I am forced to resign in order to avoid contributing to, or profiting from, the erosion of protection for dissidents," Jack Poulson, a former Google senior research scientist, wrote after resigning over the Dragonfly project. "There is an all-too-real possibility that other nations will attempt to leverage our actions in China in order to demand our compliance with their security demands."

In fact, Britain's foreign secretary, Jack Hunt, quickly pointed to Google's cooperation with the Chinese government as evidence that the company should be more compliant with the UK's demands for greater censorship of online content. Government officials from around the world are probably lining up to make similar demands.

It's obnoxious enough when private companies conflate their commercial activity with the ideological preferences of the majority of their managers and staff. The quality of their offerings then has to be balanced against the support or damage they lend to causes important to potential customers. But we don't have to use their services and can seek or create alternatives.

The stakes increase when companies become private contractors for authoritarianism. Government controls are imposed on their victims by force, and the companies that help to invent and implement those controls can accurately be called willing collaborators. As collaborators, they take on moral responsibility for the projects they develop that expand state control over subject populations.

Google's leadership obviously sees an advantage in reentering the vast Chinese market after years of exclusion, even if reentry is on terms dictated by and advantageous to an authoritarian regime. If that's really the path the company's leaders wants to take, they will have to accept that they've become part of the problem, and that they're legitimate targets for anybody who opposes the regimes they serve.

The tech giants may find that playing at politics becomes less fun when they raise the stakes quite so high.