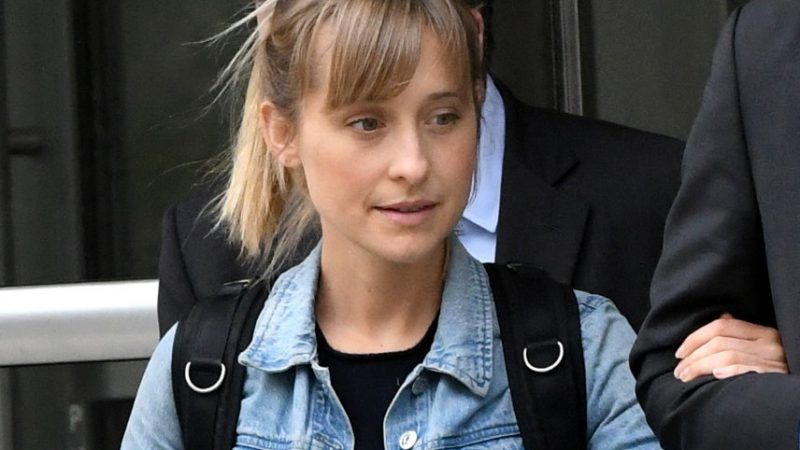 Mack was indicted on one count of sex trafficking, one count of conspiracy to commit sex trafficking, and one count of conspiracy to commit forced labor, charges she faces alongside Raniere. According to U.S. Attorney Richard Donoghue, Mack "recruited women to join what was purported to be a female mentorship group." Once accepted into the group, known as DOS, "the victims were then exploited, both sexually and for their labor, to the defendants' benefit."

Pyramid scheme is actually an apt way to describe the bizarre group. Cult may also apply.

Meanwhile, Raniere's relationships with Mack and other women suggest what we might term abusive relationships—if not physically, then at least psychologically—conducted under the guise of some sort of mentorship meets dom/sub situtation. Plus, some of the tactics he used to control these women almost definitely fall under the categories of fraud, extortion, or harassment.

Yet the idea that anyone here was actually involved in sex trafficking—i.e., forced or coerced prostitution—is incoherent under legal or common notions of the concept. This is a distinction that matters for reasons far beyond any concern for Raniere's reputation or fate.

To see why, it's important to understand what NXIVM and DOS really were and how they operated.

Founded in 1998, the Albany-based NXIVM is portrayed by Raniere as a career coaching and personal development group. But its secretive, ritrualistic, and seemingly shady ways demand cult comparisons and NXIVM's enthusiastic attempts to silence critics come straight out of the Scientology playbook. Members—who call themselves Nexians—pay hefty fees for the privilege of grueling classes and annual conferences over which Raniere presides.

As early as 2003, when Forbes magazine profiled the group, Raniere preferred for Nexians to refer to him as "Vanguard."

In 2010, Macleans reported that NXIVM's pricey workshops "cost US$6,000 for a 16-day 'intensive,'" in which "14-hour days, warm rooms and protein-poor meals [were used] to push newcomers into a psychologically pliable state." The article cites critics concerns that people "have suffered breakdowns while pursuing the NXIVM curriculum, including an Alaskan who in 2003 paddled a canoe to the centre of a lake and drowned herself." The article also offers allegations that now show up in the federal sex-trafficking indictment: that Raniere liked his lovers thin, asking them to stick to a prescribed diet ("fat, he tells his intimates, disturbs his subtle energies") and wasn't into monogamy ("it was chiefly his philandering that, 14 months ago, led to the mass defection of nine well-placed NXIVM members").

At least some people were happy with whatever it is they got out of NIXVM coaching. "Even former Nexians with good reason to distance themselves from the group say [negative] reports fail to reflect how effective Raniere's program can be in raising self-esteem and erasing anxieties, and stress that good, intelligent people often stay with the program," noted Macleans. "Says a former member who admits she spent US $90,000 on workshops over 10 years: 'I will never regret it.'"

The "women's empowerment" society that the feds now say served as a sex-trafficking enterprise was launched in 2015. Members were recruited mostly from within NXIVM ranks and given only partial information about how the group was to work, according to the federal complaint against Raniere. Prospective DOS members were required to submit some form of collateral—nude photos, signed-over assets, or damaging information about themselves or someone close to them—in order to learn more.

"Once they joined, DOS recruits were required to provide additional collateral, which they did, fearing that their original collateral would be released," according to a letter submitted to the court by Donahue.

Raniere served as the head of DOS, but only select women had direct relationships or contact with him. New recruits to DOS served as "slaves" to senior members, who would test their loyalty by asking for random requests at odd hours and require recruits to run errands and do menial tasks for them, much like hazing in a college sorority.

The women in DOS were not required to have sex with other men, and no one was compensated for sexual activity.

Mack a 'Direct Slave' to Raniere

Mack joined DOS once she was already involved in a sexual relationship with Raniere, according to the feds. In an email, she pledged her "full and complete life" to him and DOS and provided collateral (including a contract transferring any future children she had to Raniere's custody and her home to his ownership) to be triggered if she broke this commitment.

Now Mack stands indicted on the same charges as Raniere himself.

This sort of situation is all too frequent these days, as America's carceral approach to sexual exploitation prizes punishing the largest amount of people over actual justice and safety. It's common for sex workers and sex trafficking victims to be charged as traffickers by both state and federal cops—a phenomenon that seems to hit especially hard against younger women (sometimes underage themselves), women of color, and anyone precariously positioned in the sex industry and the larger economy.

Mack doesn't fall into the typical mold targeted by overzealous prosecutors in terms of demographics. Born in Germany to a pair of opera singers, Allison Mack started appearing in blockbuster movies in elementary school and spent a decade starring as young-Superman's best friend on the hit WB/CW show Smallville. Nonetheless, Mack's current legal predicament showcases one of the all-too-hidden harms from human-trafficking hysteria in U.S. government, which winds up revictimizing victims by treating them as criminals.

After Smallville ended in 2011, Mack had a recurring role in the FX comedy Wilfred and a few other guest spots, but nothing longterm. By this point, she had already gotten involved with NXIVM, according to a 2010 Macleans story on the group's rich backers. Mack joined DOS in the summer of 2015. As part of her "vow" to Raniere and the group, she was required to recruit new members and help acclimate them to DOS ways.

In the complaint against Raniere, Mack is described as his "direct slave" within DOS, along with a woman referred to only as "Co-Conspirator 2."

The complaint mentions two "Jane Does," one of whom had a sexual relationship with Raniere and one who did not. Both were allegedly recruited by Mack.

Jane Doe 1—a Brooklyn "actress in her early 30s"—joined DOS around February 2016. She alleges that after she started having sex with Raniere, he offered her a job within NXIVM and also loaned her some money and, when she left him and the group, he demanded she pay back the money. But after an "intervention" staged to pressure her to stay, Doe came away with the impression "that her collateral would not be released" if she left so long as she didn't talk about the group, and it was not.

Jane Doe 2—also an actress—claims to have been recruited by Mack in fall 2016. Her first two meetings with Raniere involved going on walks around Brooklyn, where he offered to help her launch a t-shirt business she wanted to start. Doe 2 said she was "assigned" by Mack to have sex with Raniere but instead declined and left the group. Her "collateral" was not released.

If the Does and other women in DOS were powerless against Raniere's coercion and collateral—thereby rendering them victims in this "sex trafficking" enterprise—then surely this is also true of Mack, who was treated to Raniere's same tactics. In that case, it doesn't make sense to charge Mack herself as a sex trafficker.

If Mack is still legally culpable for her outreach to other women while under Raniere's tutelage or control, however, then surely other women in DOS who recruited members (one of their requirements) and "benefitted" from participation (in terms of having new recruits serve them or rising in the ranks of NXIVM) should also be legally culpable. Yet we don't see federal prosecutors rushing to charge the entire lot of DOS members with sex trafficking themselves.

The prosecution's logic doesn't make sense—not when it comes to portraying Mack as both "direct slave" to Raniere and his equal in legal moral culpability, and not when it comes to building this as a sex trafficking and forced labor case. And that's bad for a lot of reasons, the simplest being that ill-fitting human trafficking charges make Raniere's punishment for legitimate offenses less likely.

Overuse of sex-trafficking charges also encourages further criminalization of atypical but consensual relationships. The criminal part of DOS is the alleged extortion and threats, not the sex between certain members per se or the fact that they used master/slave terminology. By bringing sex trafficking charges rather than prosecuting Raniere for fraud, threats, or extortion, authorities are overlooking the actually criminal part of what occured in favor of criminalizing the parts that shouldn't be an issue. To do this, they have had to engage in some pretty tortured logic—accusing Mack of having "received a financial benefit" for her DOS recruitment efforts in the form of "continued status and participation" in the group where she was also allegedly a sex slave herself.

Lastly, DOJ uses inflated sex-trafficking prosecution stats to justify funding and sting efforts that cause more harm than good. The vast majority of these efforts don't wind up leading to sex trafficking convictions, which suggests a lot of prosecutors bringing "sex trafficking" cases that aren't actually about sex trafficking. Nonetheless, crime bureacrats rely on arrest and prosecution numbers, not convictions, to allocate action and money. So the more fake or flawed sex-trafficking cases they bring, the more money that goes to bringing fake or flawed sex trafficking cases. And all the while, the civil liberties of sex workers and their clients suffer along with the safety and well-being of vulnerable women and children.