'Economists Say' a Lot of Things. Many of Them Are Wrong

Appeals to what 'economists say' is used to coat liberal policy positions with a veneer of scientific certitude. 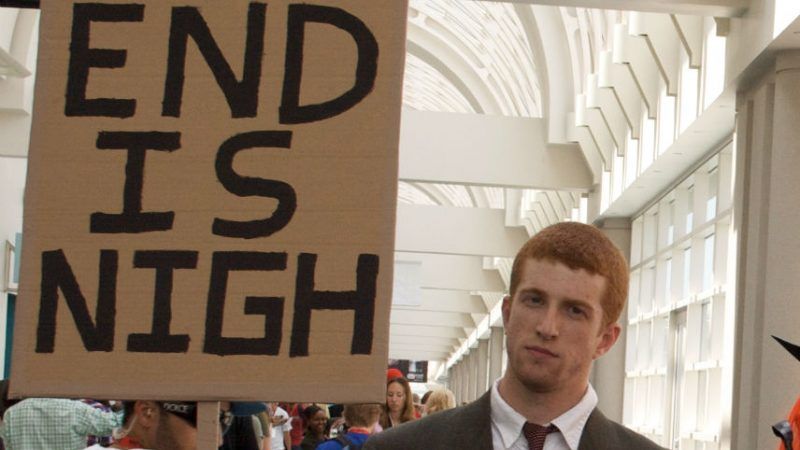 "A wave of optimism has swept over American business leaders, and it is beginning to translate into the sort of investment in new plants, equipment and factory upgrades that bolsters economic growth, spurs job creation—and may finally raise wages significantly," opens a recent New York Times article surveying the state of the American economy.

One imagines that readers of the esteemed paper were surprised to run across such a rosy assessment after having been bombarded with news of a homicidal Republican tax plan for so many weeks. But not to worry! Over the next few thousand words, the authors do their best to assure readers that neither deregulation nor tax cuts are really behind this new economic activity—even if business leaders keep telling them otherwise.

For example, they claim that "There is little historical evidence tying regulation levels to growth." A few paragraphs later, we again learn that "The evidence is weak that regulation actually reduces economic activity or that deregulation stimulates it."

A reporter without an agenda might have written that evidence was "arguable," because I bet I could corral a bunch of economists to tell you that lowering the cost of doing business spurs economic activity quite often. And though the Trump administration somewhat overstates its regulatory cutbacks, it has stopped hundreds of Obama-era regulations from being enacted. Even better, it has stopped thousands of yet-to-be-invented regulations from ever being considered. There's plenty of evidence, in the article and elsewhere, that this kind of deregulation has plenty to do with investment and job growth.

There is also plenty of evidence that econ reporters at major publications have spent the past decade propping up economists who tell them what they want to hear. That is to say, they prop up economists who obsess over "inequality" rather than economic growth, who worry about the future of labor unions or climate change or whatever policy liberals happen to be plying at the moment. There are plenty of economists out there making good arguments for the free market who will never be member of the "economists say" clique.

For eight years, we consistently heard about how "economists say" everything Democrats were doing was great (even when hundreds disagreed). Unsurprisingly, "economists" were wrong about a lot. The rosy predictions set by President Obama's Council of Economic Advisers regarding the "stimulus," the administration's prediction of 4.6 percent growth by 2012 and the Congressional Budget Office predictions about Obamacare were all way off base.

There are thousands of unknowns that can't be quantified or computed, including human nature. But after decades of using data to help us think about goods, services, jobs, consumption and our choices, "economists say" is now used to coat liberal policy positions with a veneer of scientific certitude. And since Democrats began successfully aligning economics with social engineering, we've stopped seriously talking about the tradeoffs of regulations.

A good example of this trend is the push for a $15 minimum wage—an emotionally satisfying, popular and destructive policy idea. Most cities that have passed the hike have experienced job losses. When researchers at the University of Washington studied Seattle's $15 minimum-wage hike, one of the largest in the nation, they found that thousands of fewer jobs were created and thousands of people lost hours of work, making them poorer.

No doubt a lot of people were surprised. Vox, a leading light in the liberalism-masquerading-as-science genre, ran an article headlined "The Controversial Study Showing High Minimum Wages Kill Jobs, Explained." You might wonder why incessantly quoted studies from liberal "nonpartisan" groups that falsely predicted minimum wages wouldn't hurt cities aren't "controversial." Because if you want to raise the minimum wage, you will raise the price of labor and often reduce the amount of labor that's going to be hired. That's the trade-off. For decades, most economists agreed.

While most economists I've known are relatively humble about forecasting, the ones who aren't get most of the press. "Out of 42 Top Economists, Only 1 Believes the GOP Tax Bills Would Help the Economy," a November Vox headline read. (Indeed, 36 percent of those polled gave the wholly rational answer of "uncertain.") "We'll be lucky to have 2 percent" growth, "economists say" regular Mark Zandi told CNN in May.

Certainly, the economy doesn't have the room to grow that it had in 2007 or 2012, but so far, Zandi is wrong. Neither deregulation nor tax cuts are a panacea. But businesses have already acted on deregulation and corporate tax cuts. Dozens of companies announced they would hand out bonus checks to hundreds of thousands of workers before the corporate tax cut was even signed into law. Perhaps these corporations only did it all to gain favor with the administration. Hey, some people suck up to government by cutting bonus checks for their workers, and some people make electric cars no one wants. The fact is that deregulation and tax cuts matter. We already have evidence. We just don't give voice to the economists who would tell us so.