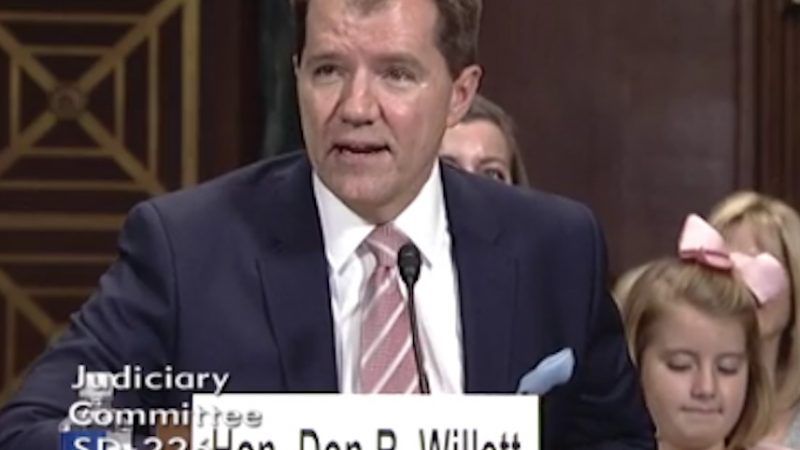 The Senate Judiciary Committee on Wednesday held confirmation hearings on Don Willett, one of President Donald Trump's nominees to the U.S. Court of Appeals for the 5th Circuit.

Willett is an outspoken jurist who has served as a justice on the Texas Supreme Court since 2005 and who has written a number of opinions on highly contentious legal issues. So naturally I expected Willett to be grilled by Senate Democrats about those rulings and the thorny legal topics they address. Call me naive, but I was genuinely looking forward to some meaningful interactions between Willett and his Democratic interrogators.

But rather than querying Willett about his court opinions or his judicial philosophy, the Democrats beclowned themselves, wasting valuable Q&A time on a series of weak and frankly embarrassing questions about some jokes that Willett told on Twitter.

It went downhill from there. One particularly low point came when Sen. Al Franken (D-Minn.), a former professional comedian, repeatedly insisted that one of Willett's obvious twitter jokes was not actually a joke. It was pathetic.

Ironically, the one senator who asked a genuinely challenging and even treacherous question for Willett was Louisiana Republican John Neely Kennedy. "How should a federal judge," he asked, "go about deciding when a right is fundamental in a case of first impression?"

Kennedy was asking Willett to weigh in on a very antagonistic debate. Here's the short version of it: The federal courts don't treat all rights equally. Some rights, such as those spelled out in the Bill of Rights, are deemed to be "fundamental" and are therefore given strenuous judicial protection.

But what about those rights that are not explicitly spelled out in the Constitution? The right to privacy, for example, is not listed anywhere in the document, yet the Supreme Court has recognized it as fundamental and repeatedly safeguarded it from various forms of government regulation. According to some conservatives, such as the late Robert Bork, the Court should not have done so because the Court has no business protecting unenumerated rights in the first place. When "the Constitution does not speak," as Bork put it, we are "all at the mercy of legislative majorities."

In other words, Kennedy asked Willett a pretty hot-button question about both the meaning of the Constitution and the role of a judge in interpreting it. He also basically asked Willett where he stood on a topic that divides the members of the conservative legal movement.

Initially, Willett tried a little side-step in his answer. "It is exceedingly rare that a case of constitutional first impression ever lands on a court's doorstep," he replied.

But Kennedy would not be put off so easily. "I think those cases are not un-rare at all," he retorted. "I mean, litigants all the time assert a constitutional right. And all I'm saying is, to have heightened protection, you have to fit it into the slot of fundamental right. I'm just asking you how in a case of first impression you would make that decision."

This time Willett gave a more direct response. "Certainly, you begin with the text and the structure and the history of the Constitution," he said.

Unfortunately, the Kennedy-Willett exchange ended there due to time constraints. The bigger question lurking in the background about unwritten rights remained unaddressed. Had any of the Democrats bothered to follow up on it, instead of just prattling on about Twitter, Willett might have gotten more specific. But that sort of substantive constitutional conversation was not to be.

If Wednesday's hearing represents the Democrats' best effort at casting doubt on his nomination, Don Willett has nothing to worry about from that side of the aisle.