Under the guise of getting addicts treatment, courts are ordering people to do dangerous and unremunerated labor in "diversion" factory farms. 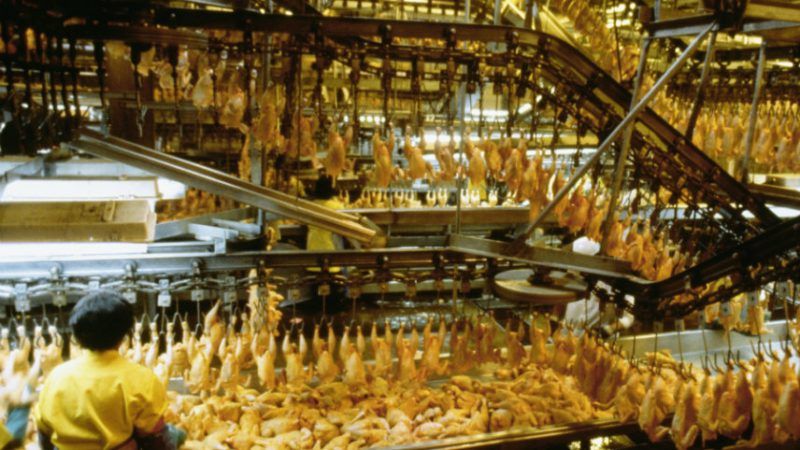 Under the guise of getting addicts treatment, courts are sentencing people to slave labor in the service of corporate interests.

Christian Alcoholics & Addicts in Recovery (CAAIR), which is supposed to provide people with addiction treatment in a rural setting, has become a court-prescribed worker pipeline for an Oklahoma chicken farm and factory, according to a piece in Reveal, the magazine of The Center for Investigative Reporting. Reveal reporters poured over court documents, tax filings, and workers' compensation claims in addition to talking to court officials, judges, and former CAAIR program participants.

CAAIR was originally launched in 2007 by food executives having trouble finding employees for low-pay, high-risk, all-hours work at chicken-processing plants. But CAAIR's claims of fulfilling a rehabilitative function are dubious. It has only one licensed counselor and no certified treatment or recovery program.

Its philosophy is that Christianity and hard work can cure addiction. Church and Bible study groups are mandatory; counseling, skills classes, and group support meetings are not.

About 280 men a year get sentenced to time with CAAIR by courts in Oklahoma, Arkansas, Texas, Missouri. It's part of what Reveal describes a burgeoning "nationwide push to keep nonviolent offenders out of prison."

Such alternatives can be very positive step toward reducing prison populations. But they can also be pointless and silly (like Seattle's $900, 10-week course on "toxic masculinity" for men convicted of soliciting prostitution), or much worse.

"In the rush to spare people from prison, some judges are steering defendants into rehabs that are little more than lucrative work camps for private industry," according to The Center for Investigative Reporting investigation.

The programs promise freedom from addiction. Instead, they've turned thousands of men and women into indentured servants.

The beneficiaries of these programs span the country, from Fortune 500 companies to factories and local businesses. The defendants work at a Coca-Cola bottling plant in Oklahoma, a construction firm in Alabama, a nursing home in North Carolina.

Judges use CAAIR to sentence people with more than drug and alcohol problems; one judge told 23-year-old Brad McGahey, sentenced for attempting to buy a stolen trailer, that he needed to learn a better work ethic. "Aside from daily cans of Dr Pepper, McGahey wasn't addicted to anything," and "the judge knew that," states Reveal.

There wasn't much substance abuse treatment at CAAIR. It was mostly factory work for one of America's top poultry companies. … And he worked for free. CAAIR pocketed the pay. "It was a slave camp," McGahey said. "I can't believe the court sent me there."

McGahey's hand was smashed after a machine malfunction and he was told any time spent healing or doing lighter work around the camp would not count toward his one-year sentence. If he didn't like it, he could go to jail. McGahey chose jail. His hand suffered permanent functional damage. He has become dependent on hydrocodone pills to deal with his chronic pain.

At CAAIR, workers hands have become "gnarled after days spent hanging thousands of chickens from metal shackles," according to the story.

One man said he was burned with acid while hosing down a trailer. Others were maimed by machines or contracted serious bacterial infections.

[…] At some rehabs, defendants get to keep their pay. At CAAIR and many others, they do not.

Legal experts said forcing defendants to work for free might violate their constitutional rights. The 13th Amendment bans slavery and involuntary servitude in the United States, except as punishment for convicts. That's why prison labor programs are legal. But many defendants sent to programs such as CAAIR have not yet been convicted of crimes, and some later have their cases dismissed.

"You've got to be kidding me," Noah Zatz, a professor specializing in labor law at UCLA, said when presented with Reveal's findings. "That's a very strong 13th Amendment violation case."

CAAIR administrators even keep worker's compensation money when those sentenced get hurt on the job. As CAAIR clients, workers are required to sign a form giving up their right to workers' comp. The company still files claims for injured workers and keeps the reimbursements, Reveal found.

"Chronic drug users …. are commodities, exploited by a growing world of drug and alcohol rehab operators," noted the Orange County Register recently in a piece on California's corrupt rehab industry. "Everything from the opioid epidemic and Obamacare to prison realignment and legal loopholes has created conditions in which unethical operators can flourish, using addicts to bilk insurance companies and the public out of hundreds of millions of dollars."

In February, three leaders of an Alabama juvenile diversion program recieved 20-year prison sentences for abusive treatment of minors in their care. "I can't imagine being a child and being taken from my home in the middle of the night, shackled and transported across the country and being forced to work," said Judge Charles Graddick. "Some of the testimony seemed more in line with the treatment we've heard done to inmates in Guantanamo Bay."

In North Carolina, a local news investigation into Corrective Solutions, a "misdemeanor crime diversion program based out of California," led to the state recently terminating its relationship with the program. Reveal reported on Corrective Solutions earlier this year, finding that the for-profit company was making handsome profits from court referals but providing little in return.

At CAAIR, leadership claims to provide a community service letting people work for their "treatment" instead of paying a fee. It is "supporting the opportunity to help people become productive citizens," Donny Epp, a spokesman for the company behind CAAIR, told Reveal.

Jim Lovell, CAAIR's vice president of program management, commented that "if working 40 hours a week is a slave camp, then all of America is a slave camp."

But most people who work 40 hours per week get some sort of compensation for that work, and are free to leave at will. The absence of these two things—or, put another way, having to work for no pay in a place you are not free to leave—is what forms the core of criminal laws against indentured servitude, forced labor, and human trafficking.

Rather than addressing addiction, prison overcrowding, and ballooning prison costs with work camps disguised as treatment, maybe we should question why so many petty, nonviolent offenses need to be criminalized in the first place.