New York merchants are challenging a state law that dictates the way they describe prices. 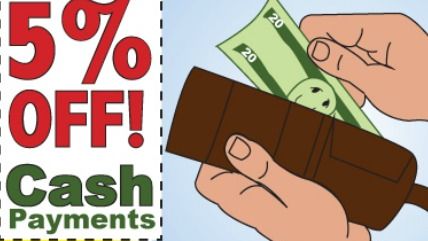 The state of New York forbids merchants to impose a surcharge on customers who use credit cards rather than cash, checks, or debit cards, but it allows them to offer a discount for cash. A cash discount amounts to the same thing economically but not psychologically: Calling the difference in price a surcharge draws attention to the fact that credit card companies charge merchants a fee (typically 2 percent to 3 percent) for each transaction, and it probably is more effective at encouraging cash purchases, since people tend to feel losses more than gains. Since the surcharge ban restricts the way retailers communicate prices, five New York businesses challenged it on First Amendment grounds, and yesterday the Supreme Court gave their case a boost by agreeing that the law regulates speech.

In 2015 the U.S. Court of Appeals for the 2nd Circuit dismissed the First Amendment challenge, ruling that New York's law regulates conduct—the prices that merchants charge—rather than speech. But as Chief Justice John Roberts points out in a majority opinion joined by four other justices (Clarence Thomas, Anthony Kennedy, Ruth Bader Ginsburg, and Elena Kagan), New York businesses remain free to set their own prices and even to charge cash and credit customers different amounts. But they are not free to describe those prices the way they prefer:

The law tells merchants nothing about the amount they are allowed to collect from a cash or credit card payer. Sellers are free to charge $10 for cash and $9.70, $10, $10.30, or any other amount for credit. What the law does regulate is how sellers may communicate their prices. A merchant who wants to charge $10 for cash and $10.30 for credit may not convey that price any way he pleases. He is not free to say "$10, with a 3% credit card surcharge" or "$10, plus $0.30 for credit" because both of those displays identify a single sticker price—$10—that is less than the amount credit card users will be charged. Instead, if the merchant wishes to post a single sticker price, he must display $10.30 as his sticker price.

Roberts notes that the plaintiffs have a strong financial interest in steering customers toward cash, since "they pay tens of thousands of dollars every year to credit card companies." In addition to encouraging cash purchases, the merchants "want to make clear that they are not the bad guys—that the credit card companies, not the merchants, are responsible for the higher prices." Since the plaintiffs "believe that surcharges for credit are more effective than discounts for cash in accomplishing these goals," they are seeking permission to talk about prices in a way the law forbids. Having decided that the ban on surcharges for credit card purchases regulates speech, the Court instructs the 2nd Circuit to consider whether the law passes muster under the First Amendment.

"The Court addresses only one part of one half of petitioners' First Amendment challenge to the New York statute at issue here," Justice Sonia Sotomayor says in a concurring opinion joined by Justice Samuel Alito. "This quarter-loaf outcome is worse than none." She agrees that the case should be sent back to the appeals court but says the meaning of the statute is insufficiently clear to go further than that. Sotomayor thinks the surcharge ban can be read in at least three different ways: as requiring the same prices for all customers regardless of how they pay, as banning the kind of signs described by Roberts, or as restricting even the terminology used to describe price differences (surcharge vs. discount). Before conducting a First Amendment analysis, Sotomayor says, the 2nd Circuit should ask the New York Court of Appeals for "a definitive interpretation of the statute that would permit the full resolution of petitioners' claims."

Justice Stephen Breyer also thinks the case should go back to the 2nd Circuit, but he does not think it really matters whether the target of the law is described as conduct or as speech. Even as a regulation of speech, he says, the surcharge ban would pass muster as long as there is a "rational basis" for it—a highly deferential standard that virtually guarantees a challenged law will be upheld.

In Breyer's view, communications between a business and its customers are nowhere near "the First Amendment's protective core," which encompasses "the processes through which political discourse or public opinion is formed or expressed." When a regulation affects those processes, he says, "courts normally scrutinize that regulation with great care." But when dealing with "regulatory legislation affecting ordinary commercial transactions" (ugh), courts should apply a "permissive standard of review."

That distinction, although commonly accepted, has no basis in the text or history of the First Amendment, and it is disconnected from the realities of daily life. For most Americans (including me), money spent or saved matters considerably more than the latest New York Times editorial about the crisis in Venezuela. Since speech that affects your wallet is more important than speech that does not affect you at all, the judicial contempt for communications related to "ordinary commercial transactions" is little more than snobbery dressed up as constitutional law.