When Even Prosecutors Can't Be Informed About Corrupt Cops, We've Got a Problem 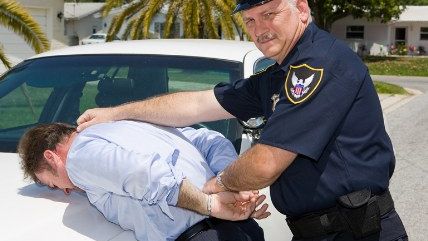 One would think that letting prosecutors know which police officers have histories of misconduct would actually be beneficial to putting criminals behind bars. If prosecutors knew about problems with an officer's history, they'd be better prepared for a possible attack on his or her credibility if it comes up in a courtroom.

But in California, thanks to laws that treat police officers' personnel records like sealed secrets, police are able to resist (so far successfully) efforts to let prosecutors know when they've got a potentially dirty officer. The Los Angeles Sheriff's Department put together a list of 300 of its own deputies that have records of misconduct. The union that represents them has so far used the courts to stop the LASD from passing those names along to prosecutors.

As the Los Angeles Times notes, this is much bigger than just concealing information from prosecutors. My lede paragraph above is wrong in another way: Because police personnel records and reputations are so thoroughly hidden by law in California, defendants and defense attorneys are far less likely to even know a cop's background to even bring it up in the courtroom. If the Sheriff's Department passes these names along to the prosecutors, they would be duty-bound to inform the defense of any information that could be relevant to the case, like, say, an officer with a record of dishonesty or violence on the job.

So this fight to conceal police officer work history is fundamentally a deliberate effort to deprive criminal defendants of potentially important information that could affect the case. Even prosecutors and defenders have to get special court orders to get information from individual police records.

The police union complained that revealing the information would "draw unfair scrutiny on deputies whose mistakes might have happened long ago." First of all, that sounds like the kind of thing that a jury should get to decide is still relevant, not law enforcement. Second, man, wouldn't it be great if you or I could make the same argument? But no, how many news stories do we see or read about a person arrested for a crime where the police have passed along to the media the suspect's entire criminal record, including mistakes that might have happened long ago?

Right now prosecutors seem to have either informal agreements with police departments to get information about bad officers, or prosecutors find out when officers themselves have been defendants in criminal cases or their behavior shows up in news articles. But several law enforcement agencies, besides the Los Angeles Sheriff's Department are looking to make a more formal arrangement to pass along information to prosecutors. Good for them for at least taking a stab at being more transparent internally about police misconduct.

A judge initially ruled that LASD could only pass along the names of problem officers when there's a pending case where they might testify. But even that was too much for the union, who wanted a full hold on the transmission of any names, and this request was granted. The lawyer for the sheriff's department thinks the case might have to go all the way to the state's Supreme Court to be resolved. This should not come as a surprise. The Los Angeles Times had to go all the way to the California Supreme Court to get law enforcement agencies to cough up the names of officers who were involved in shootings.

Related, we can head over to Chicago to see what happens when a police officer's lengthy record of misconduct complaints is public, including a case (where he was lead detective) where the city ended up paying $750,000 to man wrongly convicted of murder. The officer was recently promoted to commander! Wait, that's awful. Let's just spin it as proof that California doesn't need to conceal its officers' histories of misconduct if nobody's ever going to hold them accountable anyway.