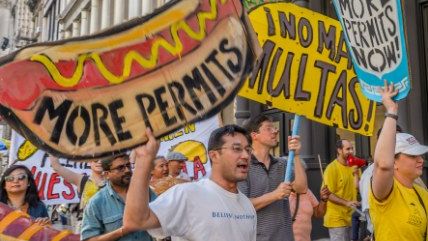 After years and years of harassment, arrests, and private property destruction, the City of Los Angeles has finally decriminalized street vending. Jesse Walker took note of the decision a few weeks ago. There are tens of thousands of street vendors within the Los Angeles area who now have a legal avenue to make a living (money-grubbing city permitting and inspection schemes notwithstanding).

The Los Angeles City Council didn't make this abrupt change because they suddenly realized their oppressive municipal regulations were harming its poorest citizens. It happened because Los Angeles has declared itself to be a "sanctuary city," where police decline to check to immigration status of those they interact with or those who end up in their custody. President Donald Trump promised a crackdown on illegal immigration, particularly down near the border to Mexico. By arresting street vendors, they could potentially be introducing them into a legal system where federal immigration agents would step in and deport them if it turned out they were in the country illegally.

But that's just one tiny chunk of the massive iceberg of municipal laws and codes that can trip up immigrants and city residents and force encounters with police. Why stop with just street vending? Shakeer Rahman and Robin Steinberg of Bronx Defenders, a criminal defense advocacy organization for the poor in that New York community, took to The New York Times op-ed pages to point out that there are all sorts of ways that cities use law enforcement and oppressive regulations that harm poor immigrants. These have always been bad policies that made life miserable and even harsher for urban citizens. Now they have an even greater potential to sweep immigrants up in a system that could separate them from their families and deport them:

Many of these unnecessary arrests stem from the discredited idea that a draconian crackdown on the most minor offenses — littering, selling loose cigarettes, biking on the sidewalk — will prevent more serious crimes. This model of policing, known as broken windows or zero tolerance, helped to drive mass incarceration. Its next cost could be mass deportation.

While the federal government runs immigration courts and prisons, local police departments are its eyes and ears. Across the country, whenever they arrest someone, city departments send fingerprints and other identifying information to federal officials. Whether the offense is as trivial as selling mango slices on the street without a license or taking a shortcut through a park after dark, federal agents are notified of an immigrant's name and how to find him or her.

President Trump has announced his plans for all those names. Each week, the White House will publish a list of crimes that immigrants have been accused of, and the government will prioritize the deportation of anyone "charged with any criminal offense," even if it never leads to a conviction.

They conclude: "Until cities reject the failed thinking that led to mass incarceration, local police and prosecutors will be doing the legwork for mass deportation."

Granted, the Bronx Defenders are using the circumstances to advance an argument they've been pushing for some time, and so is Reason. We've done a lot of reporting and blogging about how overcriminalization of "quality of life" issues in cities overwhelmingly ends up with law enforcement officials cracking down on poor people.

And yet, when these encounters go bad and lead to police violence, the emphasis is almost entirely on police abuse and never the underlying crime enforcement issues that brought the city to this point. It was wrong for New York police to strangle Eric Garner to death for selling black market cigarettes, but urban progressives flat out do not want to discuss the oppressive taxation and regulatory atmosphere that forced that interaction. Apparently it would have been fine for police to arrest Garner or fine him and otherwise ruin his life via municipal regulation. Literal strangulation is wrong, but apparently doing so metaphorically through the legal code is just fine.

The Trump immigration initiative should serve as a reminder that as big a bully municipal governments may be, the feds have a bigger stick. This is an opportunity for city governments to consider the way their own codes and policies are making the lives of their poor citizens miserable. If they want to use fear of Trump as an excuse to dump all sorts of nasty regulations, so be it.