Will Baltimore's Police Reform Agreement Survive Under Sessions as A.G.?

And would it actually improve accountability for police misconduct anyway? 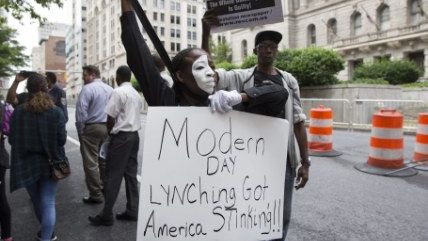 As Senate testimony and questioning of Sen. Jeff Sessions (R-Ala.) is wrapping up, sources with the City of Baltimore are announcing they're finished with hammering out reforms to the police department in conjunction with the Department of Justice.

According to the Associated Press, the agreement has been finalized and may be released on Thursday. The reform agreement will be the result of a Justice Department investigation launched back in 2015 examining use of police force following the death of Freddie Gray in police custody. Gray died from a neck injury after being battered around while being transported handcuffed but not restrained in a police van after arrest. From the Associated Press:

It also found that physical force was often used unnecessarily, including against the mentally disabled, and that black pedestrians and drivers were searched more often than people of other races. …

The report also said officers use unreasonable and excessive force, including against juveniles and civilians who aren't dangerous or pose an immediate threat. Force is often used as a retaliatory tactic in instances where officers "did not like what those individuals said," the report concluded.

We don't know yet what sort of reforms the City of Baltimore has agreed to. And we also don't know whether they'll survive the end of Loretta Lynch's leadership as attorney general. As Anthony Fisher noted this morning, Sessions is a skeptic of the use of consent decrees by the Department of Justice to try to force police. He said, "I think there is concern that good police officers and good departments can be sued by the Department of Justice when you just have individuals within a department that have done wrong. These lawsuits undermine the respect for police officers and create an impression that the entire department is not doing their work consistent with fidelity to law and fairness, and we need to be careful before we do that."

He isn't necessarily opposed to them entirely and said any changes to existing reform decrees would have to be approved by courts and will remain in force otherwise.

If Sessions is worried about some sort of collective responsibility falling upon police officers on the basis of these consent agreements, he needn't worry. Many of these consent agreements are all about training and documentation and bureaucratic record-keeping. They're not actually about holding individual police officers accountable for misconduct. As I've previously noted about these Justice Dept. reform plans, they're absent any real engagement in the idea that there are police officers who may be deliberately engaging in misconduct. It's all a matter of fiddling around with the wording of policies.

Sometimes these reforms are completely oblivious to how municipalities even function. When the Department of Justice put together a plan to reform the police and courts in Ferguson, Missouri, one of the requirements was that the small town increase the wages of police officers to make the pay more competitive with those of nearby towns. Except, one of the major civil rights problems with police behavior in Ferguson was that it was relentlessly fining its minority citizenry in order to fund its own government. Their solution was to increase city spending!

These consent agreements don't address the inability of cities to hold police accountable for misconduct and get rid of them, thanks to the processes and procedures put into place through collective bargaining with police unions.

Baltimore did try to hold the police responsible for Gray's death accountable in the courts but failed. The police are now countersuing and claiming malicious prosecution. We can embrace the idea that the officers should not be criminally punished because a jury was unconvinced, but it doesn't mean we should accept that they should be allowed to return to duty. But complex protective measures pushed by unions make it hard to get rid of cops. And even when cops do get forced out because of misconduct or incompetence, police unions have resisted mechanisms of transparency, making it easier for bad officers to get jobs elsewhere.

All of which is to say we should be skeptical of these agreements because they end up obscuring the accountability issue with a host of other expensive training programs and bureaucratic demands. They do not want to address the problem that labor practices have resulted in a policies that protect officers at the expense of the public they're supposed to be protecting.