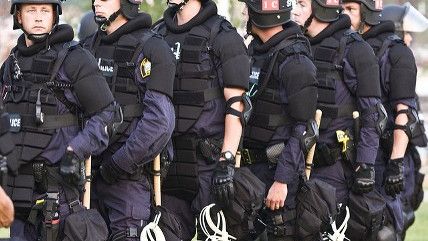 The Department of Justice (DOJ) announced yesterday that at long last, it will finally begin tracking police use of force data in a single national database, with a pilot program expected to be launched under the next presidential administration sometime in 2017.

As we've noted here for years at Reason, the lack of a national database to track use of force is a glaring abdication of governmental responsibility, and a particularly absurd one at that, given how much federal money goes to study everything from "the gambling habits of monkeys" to the effect of Swedish massages on rabbits. Even FBI Director James Comey admitted last year that it was "embarrassing" that the government couldn't keep track of the number of deaths caused by its armed agents.

In the absence of a government-run database, The Guardian, The Washington Post, and smaller websites such as Fatal Encounters have stepped up to create their own databases detailing both the raw numbers and specific details regarding incidents where citizens have been killed by police.

The New York Times reported how the new pilot program is intended to work:

Under the Justice Department plan, the F.B.I. is to begin a pilot program early next year to assemble data on the use of force by about 178,000 agents at major federal law enforcement agencies including the Drug Enforcement Administration, the Marshals Service, the Bureau of Alcohol, Tobacco, Firearms and Explosives, and the F.B.I. itself.

In addition, the Justice Department plans to begin collecting data from local and state law enforcement departments on "in custody" deaths — not just in shootings, but in cases of suicide and natural death as well.

A measure passed by Congress in 2014 called the Death in Custody Reporting Act required local departments to report only fatal encounters. Justice Department officials said they would rely on local police officials to voluntarily report nonlethal encounters as well.

Under a third part of the plan, the Justice Department said it was authorizing $750,000 for a "police data initiative" designed to help local departments collect and publicly release information on a wider range of actions, including stops of citizens, searches, the use of force, shootings and other encounters.

When announcing the pilot program, Attorney General Loretta E. Lynch did not explain how the Justice Department intends to entice local agencies into complying with the Death in Custody Reporting Act. As we noted last month, the DOJ's Arrest Related Death (ARD) program already requires local departments to report such relevant data, but more than a dozen states don't report at all, while many others report incomplete data. Non-compliant states are supposed to be disciplined by having funds from federal grants devoted to law enforcement revoked, but as Justin Glawe wrote in The Daily Beast, "There is no indication that this punishment mechanism has ever been implemented."

A national database on use of force is a necessary and appropriate use of government resources, but it remains to be seen how seriously the federal government takes this project, especially if it is not currently making use of the leverage it has over non-compliant states and local agencies.