Reforms would also raise minimum-age threshold for Texas strippers from 18 to 21. 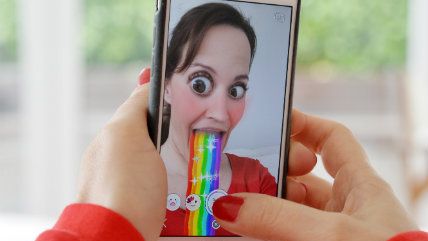 Texas father's story of "Snapchat sex traffickers" has gone viral as he pushes for legislation that would, among other things, allow parents to have their 18- to 20-year-old offspring involuntarily committed to psychiatric facilities for engaging in sex work. His measure would also raise the minimum-age threshold for working at strip clubs and other sexually-oriented business from 18 to 21. He is selling it as a way to fight human trafficking, and says Texas lawmakers are on board.

The Fort Bend County father, John Clark, became interested in the issue last spring after his 18-year-old daughter, Heather, ran away from home and may have been having sex for money. Clark has claimed repeatedly that Heather was lured by a sex trafficker whom she met on Snapchat as a 16-year-old, and he strongly implies that this man abducted or held her captive and forced her into prostitution. But while it's understandable why Clark might want to diminish his daughter's agency here, the facts he offers suggest Heather left her parents' home willingly, did not want to return, and only did so after Clark had her tracked down by FBI agents and private investigators.

According to Clark, the ordeal started when his daughter left home on Saturday, April 30, to go to the gym. Once there, Heather ditched her car and cell phone and headed with friends to a party. When she didn't return home, the Clarks reported their daughter missing with the Fort Bend County Sheriff's Office.

Six days later, on May 5, Heather contacted her parents and told them to call off the search—and reward money—for her. "She's said that she doesn't want to come home," her dad told the Houston Chronicle. "We don't know what is behind her choice."

At this point, Heather's family and Fort Bend police still believed, understandably, that she may have been abducted and was only ordering her family to stop looking for her under duress. The cellphone abandonment certainly raises red flags—what kind of 21st-Century teen ditches their phone in their car before going to a party?

Perhaps one who's worried her parents are tracking it. According to a May 21 Facebook post from John Clark, he and his wife had been concerned about Heather's friends and phone-app usage long before she ran away, and taken extreme measures to monitor her whereabouts physical and digital. After laying out his theory of how sexual predators "groom" teen girls to be their victims, a process he believed befell his daughter, Clark writes that we "may get the impression [they] were uninvolved parents" who didn't pay attention to Heather. "That was not the case."

Heather's parents "went through her phone several times a week," her dad explains. At home, the 18-year-old wasn't allowed to take her cellphone upstairs to her bedroom and "when she went upstairs she had to leave her phone on the kitchen counter, so we could check it." They required Heather to provide them with "all her passwords," sometimes grabbed her phone out of her hands "unexpectedly (before she could log out of the app)" to check her recent Snapchat communications, and installed a GPS tracker on her car.

In addition to monitoring the car GPS "every time she left the house," Clark notes that they "Facetimed her every time she went out to make sure she was where she was supposed to be, and she was with the people she was supposed to be seeing." (These were "friends from high school," he later points out, because human trafficking isn't "limited to the inner city.") Heather was grounded "every time she had contact with one of the people we thought were trouble," and Clark writes that he "went face-to-face with a few of them and assertively demanded they stay away from my daughter."

Clark doesn't say if he had tracking software installed on Heather's phone, but in his advice to other parents, he writes: "Children of parents have no right to privacy. We have a responsibility to search EVERYTHING. Install an application like mobistealth or Mobil-spy on your kid's phone. Mobile-spy monitors a few more things, mobistealth doesn't let the child know a monitoring application is installed."

We don't know what Heather was thinking when she left home, obviously, exactly what her relationship was with the man involved, in what manner she was involved in the sex trade, or how she came to be involved thusly. But from everything her dad has told us here, I can't say I'd blame an 18-year-old for wanting to get away from that environment. Maybe Heather didn't even mean to leave for very long, but soon she's looking at team of private investigators, local cops, and volunteer federal agents trying to find her, in addition to her dad.

On May 8, eight days after she left her parents' home, Heather was found at an apartment with the man she met on Snapchat, about whom her father has provided few details. "WE HAVE HEATHER!" he posted to Facebook that day. "Praise God we have her! … So much happened behind the scenes that we could not communicate publicly, but trust me it was an army! Countless thousands of prayers, volunteers who were AMAZING, private investigates, the FBI, and a team of former special forces that were a boots on the ground rescue operation."

On May 10, Clark posted, "Now is not the time to press Heather for details about her ordeal," adding that "the people responsible are well known the FBI's trafficking task force. Regardless we still don't have all the answers about all the relevant people, locations, and events. There are also people we believe were involved (I have to be careful how I phrase things) that are still on the streets."

Since then, Clark has been meeting with Texas and federal lawmakers, circulating an online petition, and reaching out to the media in service of legal reforms that he calls the "cornerstones" of his fight against human trafficking:

Any period of "extended parental guardianship" would be temporary. The guardianship period could be triggered if at least four of following six criteria are met: the young adult 1) lives at home, 2) is still in high-school, 3) is a full-time college student, 4) was claimed as a dependent by the parent(s) on the prior year's tax return, 5) has never been married, and 6) has not been the subject of any child protective services (CPS) investigations.

It's a pretty chilling idea—both in general and under the circumstances. Here is a man who permitted his 18-year-old daughter almost no privacy, went to great lengths to track her down after she left home and told him she didn't want to return, and has publicly assigned more culpability to Snapchat than his daughter for any of it. Perhaps those are normal parental impulses and his response to her disappearance natural, but what he's now asking for is changes to Texas law that would allow him—and the parents of many 18-, 19-, and 20-year-old adults in Texas—to continue treating adult offspring like literal children under the law.

Clark's proposal isn't simply an age-specific or family-oriented version of current processes for assigning guardianship of "incapacitated" adults in Texas or court-ordering psychiatric treatment to those who pose danger to themselves or others. No, what he describes is a way to standardize and expedite the process by which parents can gain guardianship to act on an adult child's behalf "with hospitals, doctors, treatment/therapy facilities, police, etc." regardless of their mental capacity and specifically for "children ensnared by" human trafficking.

Of course, there would be no need for families to assume guardianship of someone currently trapped by traffickers. And if someone was trafficked, rescued, and subsequently too traumatized or otherwise mentally unstable to serve as their own guardian, the courts could assign guardianship to a family member or compel mental-health treatment through other means. Which leaves us with situations in which the "child" has reached the age of adulthood, is or has been engaging in prostitution, claims to be doing so willingly, and has not been found otherwise unsound.

Obviously, someone's "child" who is over age 18, psychologically healthy, and proclaiming to have participated in prostitution willingly is no longer a human-trafficking victim. They're a sex worker.

Under Clark's proposal, a 19-year-old single woman who lives on her own, attends college, and makes money selling sex in her spare time could find herself back under her parent's rule (and subject to their medical whims) so long as her parents were never investigated by Texas CPS and had claimed her on tax returns the previous year.

"The next Texas session, beginning in January 2017, is the perfect time to introduce [this] legislation," states Clark in his online petition. He is "currently seeking counsel to craft the careful wording that will be necessary for the law change to hold up in court," and has since May "met many times with Senators, Representatives, Governor Abbott's and Attorney General Paxton's staff, and Anti-HT organizations."