Who Will Get to See the Footage of Keith Scott's Killing by Police?

North Carolina's new law gives authorities control over how much we're allowed to see, and therefore how much context we have about community anger. 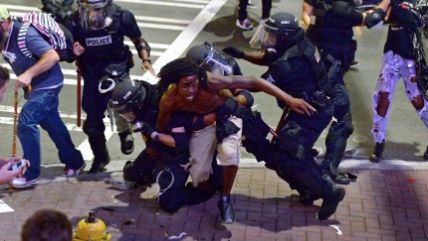 Even though the City of Charlotte purchased body cameras and trained all police to use them and wear them, the officer who shot and killed Keith Lamont Scott Tuesday was not wearing one. The officer was in plainclothes, but several other officers on the scene were wearing body cameras and officials have or will be looking over the footage.

The big question is when—or if—members of the public will get to see the footage. Given the current outrage, rioting, and violence, it's certainly going to be in Charlotte's interest to reveal some of it so that the public can get an answer to the question of whether Scott was actually holding a book or a gun. Today, Charlotte's chief of police said they have no intention of releasing video footage of the shooting "to the masses," though and also said the footage itself does not conclusively prove whether Scott was holding a gun on officers. Whether the community will accept his decision is another matter.

But because the state of North Carolina just passed a new law that seriously curtails the transparency of police body camera footage, there's also question of what is actually legal for Charlotte to allow the public to see. As I previously blogged, North Carolina's new body camera law creates an assumption that footage of police encounters is not a public record. The law gives police tremendous amount of discretion to decide who may even view recordings of police body cameras and a judge the power to decide whether and how much camera footage may be released.

Fortunately this new law doesn't take effect until October 1. Charlotte Mayor Jennifer Roberts told the Washington Post that she didn't believe the law would therefore apply in this case because the shooting happened before the law would be implemented. Right now the available body camera footage has not been released because it's part of an active investigation. But Roberts makes it pretty clear in her interview that she at least wants to allow some community leaders outside law enforcement or city officials to see the footage.

What would be happening if this shooting had occurred after October 1? I think, in this particular case, because there's so much unrest—unrest that has led to pretty serious violence—police officials and the relevant judge would most likely agree that it's in the public interest to be able to see the parts of the body camera footage that show what actually happened.

This is an easy decision, though. The backlash is so huge that refusing to release the footage essentially feeds a public safety threat. What should be of a greater concern about this law is the number of situations that don't get so much media attention and therefore the political pressure that will encourage transparency. This may well end up being another situation like what happened in Ferguson, Missouri, where it turned out that police may have acted appropriately in that incident, but there were so many other problems with how the police and the city itself treated its own citizens. The outrage over Michael Brown's shooting was the breaking point about a whole lot of abusive treatment by Ferguson of its citizens, and that abuse only became widespread public knowledge as a direct result of the protests.

The ability to conceal other incidents of potential police misconduct will feed a cultural situation where people who are not directly affected have a much harder time understanding why a community is outraged and are reacting in this fashion. Even now, despite so much reporting showing how small municipalities in St. Louis County nickel-and-dime their own poor and minority citizens via an oppressive, punishing policing and court system, there are those who simply dismiss the protests because Brown was likely no innocent kid.

It's very easy to see it happening again should it turn out that Scott's shooting was justified. Some are already inclined to dismiss the protesting already because some folks have turned to violence. In such an environment, concealing body camera footage allows officials to play dumb about complaints about citizen treatment.

Much of the reason that we're seeing more conservatives join the push for serious criminal justice reform is because they're developing a better sense over time of the actual impacts of bad policing and sentencing practices. The data shows that the merciless manner by which the United States has fought the drug war doesn't work, ruins families, and doesn't make society safer.

Body camera footage will help give people outside these communities a better sense over time how police treat the citizens they're supposed to be protecting and a better sense of how to evaluate and interpret these community backlashes. The circumstances of he the shooting should decide whether or not the officer did anything wrong and should be disciplined or charged with a crime. But the context of the shooting put in perspective with how police in Charlotte interact with citizens also needs to be evaluated in order to shape enforcement behavior. Keeping all footage secret by default does not assist the community in watching the watchers.