Boston Cops Resist Body Camera Pilot Program; Have to Be Ordered to Participate

Police unions fight any and all efforts at transparency, accountability. 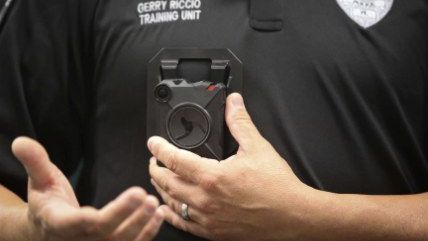 When the City of Boston called on 100 volunteers from the police department to help pilot a body camera program, something very expected, predictable, and heard of happened: Nothing.

Even with $500 bonuses as a result of negotiations with their union, not a single police officer in Boston volunteered to wear a camera. As a result, today 100 police officers are going to be flat-out told they'll be participating in the program regardless of whether they want to.

The city's mayor and police commissioner are expecting push back and possibly a legal challenge from the union. From the Boston Herald:

Boston Police Patrolman's Association President Patrick M. Rose told the Herald that goes against the deal the union reached with the department, which he says specifically states participants must be volunteers.

"The selection process must be from volunteers," Rose wrote in an email to the Herald, adding that the union still supports that agreement.

"To require non-volunteers to participate in the program would clearly violate the agreement," he said. "The BPPA would hope that the City and the Department would honor its written agreement with the BPPA concerning (body cameras)."

However, McNulty said officers' refusal to take part was a deal-breaker itself.

"Not getting volunteers also violates the agreement," McNulty wrote to the Herald.

The Herald and the Boston Globe noted that civil rights advocates themselves were bothered by the pilot program calling for volunteers with a completely different concern: They were afraid that a volunteer program would attract only the respectful cops that were less likely to engage in inappropriate behavior.

A good response to the resistance by the police over body cameras came from Massachusetts American Civil Liberties Union lawyer Carlton Williams, who said, "They could have another job if they don't want to be accountable to the community."

On the other side of the country, in Seattle, one federal judge is attempting to tackle the issue of how police unions are using the contract negotiation process to protect themselves from accountability for misbehavior. The Seattle police are under an agreement from the Department of Justice to reform their practices to reduce problems of excessive force and biased enforcement. But the police union is attempting to apparently tie these reforms during the contract negotiating process with demands for better pay and other giveaways.

The attention on the comments this week by U.S. District Judge James Robart focused on the fact that he used the phrase "black lives matter" on the bench while lecturing the police for rejecting a new contract. But what he was saying was fundamentally more about how constitutional protections and accountability to the public are not things that can simply be negotiated (or more importantly—negotiated away) during collective bargaining. From the Seattle Times:

"To hide behind a collective- bargaining agreement is not going to work," Robart said during a dramatic court hearing he opened by laying out a path for police-accountability reform and closed with an emotional declaration that "black lives matter."

Somebody should consider telling the "Movement for Black Lives" coalition about the relationship between collective bargaining in law enforcement and the impact on civil liberties and transparency. Their "platform" specifically calls for the protection and embrace of public sector employee unions. This is what a strong public sector employee union looks like, folks, and this is what they accomplish.