The appeals court rules that Congress has forbidden such interference. 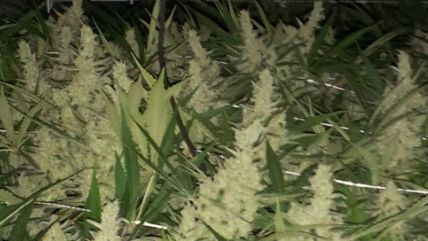 Yesterday a federal appeals court ruled that a spending rider approved by Congress in 2014 and 2015 prohibits the Justice Department from prosecuting marijuana suppliers who "fully comply" with state laws allowing medical use of the plant. The DOJ had argued that the rider, which says the department may not use appropriated money to "prevent" states from "implementing" their medical marijuana laws, applies only to litigation against the states themselves, not to prosecution of individuals who provide cannabis to patients. A three-judge panel of the U.S. Court of Appeals for the 9th Circuit unanimously rejected that interpretation, saying federal marijuana defendants are entitled to evidentiary hearings at which they can try to show their actions were authorized by state law.

The case, United States v. McIntosh, consolidates 10 appeals by medical marijuana growers and dispensary operators in California and Washington, including the proprietors of Hollywood Compassionate Care in Los Angeles. The defendants argued that prosecuting them violates Section 542 of the omnibus spending bill that Congress approved last December, which covers the fiscal year that ends on September 30, as well as a similar provision that applied to the previous fiscal year. The amendment, which was introduced by Reps. Dana Rohrabacher (R-Calif.) and Sam Farr (D-Calif.), says "none of the funds made available in this Act to the Department of Justice may be used" to "prevent [states] from implementing their own State laws that authorize the use, distribution, possession, or cultivation of medical marijuana." The 9th Circuit agreed with the defendants that the Rohrabacher/Farr amendment, although "not a model of clarity," covers criminal prosecution of people who engage in those activities as well as lawsuits aimed at overturning or neutralizing medical marijuana laws:

DOJ argues that [Section 542] does not prevent the Medical Marijuana States from giving practical effect to their medical marijuana laws by prosecuting private individuals, rather than taking legal action against the state. We are not persuaded….

We therefore conclude that, at a minimum, § 542 prohibits DOJ from spending funds from relevant appropriations acts for the prosecution of individuals who engaged in conduct permitted by the State Medical Marijuana Laws and who fully complied with such laws….

If DOJ wishes to continue these prosecutions, Appellants are entitled to evidentiary hearings to determine whether their conduct was completely authorized by state law, by which we mean that they strictly complied with all relevant conditions imposed by state law on the use, distribution, possession, and cultivation of medical marijuana.

Passing that test may not be easy, since neither California nor Washington licensed or explicitly allowed commercial production and distribution of medical marijuana when these defendants were arrested. In both states dispensaries operated based on controversial interpretations of state law, as patient cooperatives or collectives in California and as "collective gardens" in Washington. The 9th Circuit explicitly rejected the argument that Section 542 means the DOJ must let states deal with medical marijuana suppliers who fail to "fully comply" with state law.

Another limitation of Section 542 is its temporary nature. "DOJ is currently prohibited from spending funds from specific appropriations acts for prosecutions of those who complied with state law," the Court says. "But Congress could appropriate funds for such prosecutions tomorrow. Conversely, this temporary lack of funds could become a more permanent lack of funds if Congress continues to include the same rider in
future appropriations bills."

Last October, in a separate case involving a federal injunction against the Marin Alliance for Medical Marijuana, U.S. District Judge Charles Breyer anticipated yesterday's ruling by rejecting the Justice Department's narrow reading of the Rohrabacher/Farr amendment. The DOJ initially sought to overturn Breyer's decision but dropped its appeal last April. Less than a month later, the feds abandoned their civil forfeiture case against Oakland's Harborside Health Center, the largest medical marijuana dispensary in the country, which they had been trying to shut down since 2012. If those surrenders were aimed at avoiding a circuit-wide rejection of the Justice Department's position, the strategy did not work.