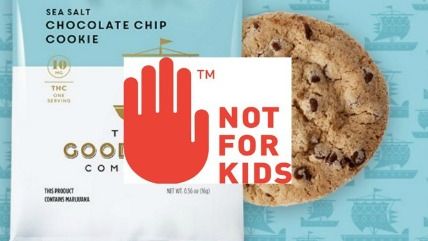 Remember Mr. Yuk? The disgusted, neon-green version of the classic yellow smiley face was developed back in the early 1970s by Pittsburgh pediatrician Richard Moriarty, who was looking for a symbol that would repel little kids from poison more effectively than the traditional skull and crossbones. Although the Mr. Yuk symbol was never validated by studies showing that it had the desired effect and some research suggested it did not, the warning label was adopted by poison control centers throughout the country.

Many of them eventually had second thoughts. Mr. Yuk was "a good concept and very popular tool," says the Northern New England Poison Center, but "studies showed that Mr. Yuk wasn't effective." In fact, "some kids may have been attracted to the sticker." The Illinois Poison Center offers a similar explanation for its decision to stop distributing Mr. Yuk stickers: "Available research…demonstrated that the Mr. Yuk® sticker is not a strong method to warn children away from possible poisons. Instead of acting as a deterrent and discouraging children from touching a potentially poisonous item, research has found that children often were attracted to the stickers featuring a bright green, frowning face."

Washington's Liquor and Cannabis Board (LCB) nevertheless turned to Mr. Yuk for help in discouraging children from consuming marijuana edibles—until objections from the industry and prevention specialists persuaded it to go a different way. The Washington Poison Center (WPC) recently unveiled an alternative label that is expected to start appearing on packages of marijuana products by next April: an upraised red hand next to the warning "Not for Kids."

While that message seems more fitting for a product that is not in fact poisonous, the new label is not scientifically validated either and should not be expected to solve the problem of unintentional marijuana ingestion by children. The red hand is the latest in a series of regulatory responses to a problem that is ultimately a matter of parental responsibility.

Last year the WPC received 272 calls regarding marijuana exposures, up from 246 in 2014, the year that state-licensed marijuana stores first opened, and 158 in 2013, when possession was legal but cultivation and sales for recreational use were not. The Rocky Mountain Poison and Drug Center has recorded a similar increase since marijuana was legalized in Colorado.

Marijuana-related cases still represent a tiny percentage of the calls received by the poison centers, and the upward trends may be partly due to changes in reporting behavior. Consumers and bystanders (including parents) are probably less reluctant to call poison control centers about marijuana exposures now that the drug is legal. Still, the increases in calls are plausibly related to easier availability of marijuana products.

Most of the marijuana calls the WPC received in 2015 involved adults, and nearly a quarter involved teenagers. But there were eight cases involving 6-to-12-year-olds and 52 involving kids 5 or younger—an age group where a warning symbol might have an impact by alerting nonreaders to the nature of the product.

The LCB initially thought Mr. Yuk, which the WPC still uses, should be that symbol. But after the board floated the idea last January, "there was quite an uproar from individuals in the cannabis community and some in the prevention community," says Alexander Garrard, the WPC's clinical managing director. Marijuana merchants pointed out that their products, unlike the items to which Mr. Yuk has traditionally adhered, are intended for internal consumption.

"Many in the cannabis industry felt that Mr. Yuk symbolized poisons, and they did not want their marijuana edibles labeled as such or have it even insinuated that marijuana was a poison," Garrard says. "They also felt, like some in the prevention industry, that using Mr. Yuk on an edible that adults would use might confuse young kids who are taught not to eat anything with the label on it." When the LCB "heard from the Washington Poison Center that they were developing a warning symbol of their own," LCB spokesman Brian Smith says, "the board withdrew Mr. Yuk to give the Washington Poison Center time to create and vet its image."

There was a similar uproar in Colorado when marijuana regulators considered requiring a red stop-sign symbol emblazoned with the letters THC on packages of edibles. The final regulations, which take effect on October 1, require a less judgmental diamond instead of the alarming octagon. Either way, it's doubtful that the average toddler or preschooler will know what THC signifies, which suggests that the symbol is aimed more at adults who might otherwise overlook less conspicuous indications that a product contains marijuana—such as the label that says, "This product contains marijuana." The diamond symbol is also supposed to be stamped or imprinted, when feasible, on the product itself, so it will look different from nonpsychoactive foods even when it has been removed from its package.

Smith says the purpose of Washington's new warning symbol "is to alert kids that the product is for adults only." Garrard agrees that the red hand "serves as a visual sign to young kids to stay away from the product." He notes that the new label "also provides the national toll-free number to the poison control centers in the country should an adult, teenager, or someone else need to call for medical help." But he concedes "there is no evidence to suggest that a label will reduce the number of calls to the poison center," which is usually viewed as a measure of problematic encounters with marijuana.

"Call volume is not [necessarily] indicative of whether or not poisonings are increasing or decreasing," Garrard cautions. "An increase in calls might just indicate that more people are knowledgeable about the service now and are calling. We are therefore capturing more of what was already there. Likewise, a decrease in calls doesn't necessarily suggest that poisonings are going down. It could be due to lack of public education and visibility of the service, people afraid to call, [or] an actual decrease in poisonings."

While the "Not for Kids" label makes adults feel better, we may never know whether it actually reduces accidental ingestion of marijuana. In that respect it is reminiscent of a new Colorado law that aims to address this problem by banning edibles shaped like animals, people, or fruit. All other shapes—hearts, moons, stars, flowers, marijuana leaves, etc.—are still permitted. Such laws mainly serve to eliminate products that make legislators uncomfortable.

THC-infused gummy bears are scary, whether or not they actually increase underage cannabis consumption, and warning labels are reassuring, whether or not they actually reduce it. Marijuana edibles in Colorado and Washington already are sold in child-resistant packaging. They already bear labels that say they contain marijuana and urge consumers to keep them away from children—a precaution that would eliminate accidental ingestion by toddlers and preschoolers if consistently followed. It seems unlikely that yet another warning will have a noticeable impact.

But who knows? Regarding the Mr. Yuk symbol, Garrard says "the data are not entirely conclusive that it's ineffective or effective," and "the reality is that no single warning label is going to prevent childhood poisoning completely." He says the WPC still uses Mr. Yuk "to talk to kids and youth about harm reduction and dangerous household chemicals."

Mr. Yuk's durability may be largely a result of the improbable nostalgia he inspires. "The Washington Poison Center has used Mr. Yuk as part of its education program since the logo came out," Garrard says, "and many people in Washington state have fond memories of the education campaign. It's not uncommon to hear, 'I grew up with Mr. Yuk! That's how I know about the poison center.'"