Editorial board dings Libertarian ticket for "wishful thinking" that libertarian policies could "solve a range of complicated social problems," even though candidates said no such thing 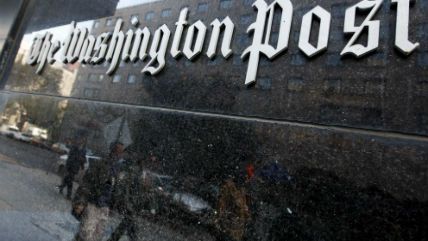 The Washington Post editorial board, one of the prime caretakers of establishmentarian consensus about national politics, has a curious editorial today titled "Gary Johnson is an honest but defective candidate." The piece is curious not simply because it invites snarky retorts—so, you prefer dishonest but effective candidates, eh? No, it is curious—and instructive about the collision between default libertarianism and Washington managerialism—because some of the key negative characterizations it makes about the Libertarian Party ticket is not borne out by the transcript of the interview upon which the editorial was based.

For instance, after dinging Johnson for allegedly not knowing what the nuclear triad is (I say "allegedly" because the transcript is not conclusive to me on that point) and for not attaching a precise ideal number on the federal government's percentage spending of GDP, the ed board gets to its real, world-weary objection.

More disturbing for anyone inclined to take this candidacy seriously was Mr. Johnson's habit of resorting to wishful thinking whenever reality collided with libertarian ideology. Getting the government out of the way, he claimed, would solve a range of complicated social problems. Police shootings and various racial disparities have been results of the war on drugs, he argued, as if racism and police brutality would not exist if marijuana were legal. Climate change is real but regulations to cope with it aren't needed, because consumers will demand clean energy, as if transforming the energy system were as simple as buying fair-trade coffee.

The Islamic State is a danger, he acknowledged, but he suggested it will work its own way into oblivion; no need for U.S. troops to help in that process.

Johnson's words back up none of the four phrases bolded above.

1) "Getting the government out of the way, he claimed, would solve a range of complicated social problems."

The Post uses the phrase "solve" twice in its editorial, which is two more times than Johnson or Weld do in the interview. To the contrary, they go out of their way to stress that they don't have all the answers, or even all the knowledge required to get at the right answers. (Sample Johnson quote: "I'm no expert here on anything.") In fact, such is their reticence to pronounce sweeping policy solutions that editorial board members became audibly frustrated:

Q: A lot of the response is, "Well, I need to find out about this. I don't know." So, why should people vote for you for president? Aren't we taking an awful lot on faith?

JOHNSON: You do have two former governors here, Republican governors serving in heavily Democrat states, that were really successful, getting reelected, I think speaks to being successful. Being fiscally conservative and socially accepting, tolerant—that's the mix here. Are you taking a lot on faith? Well, you've got to look at the résumés and you've got to consider that, in my opinion, these are two people that are really very thoughtful, and that there is a process, and that it's a transparent process, and that it's about honesty and telling the truth. And that's history, that's résumé, that's prior work history.

It's the Washington Post editorial board here demanding thought-out solutions to questions like D.C. statehood, while the Libertarian Party ticket stresses modesty of knowledge, local experimentation, and a process-based approach rooted in principles ranging from non-aggression to zero-based budgeting.

2) "as if racism and police brutality would not exist if marijuana were legal."

Did Gary Johnson say anything like that, or claim that the one-stop solution for racism and police brutality was ending the drug war? No, he did not. Here's what he did suggest policy-wise:

And later, William Weld enthsued that the Justice Department should get involved in federal civil rights investigations of local police misconduct. What Johnson did stress, and which I think is more correct than not, is that the war on drugs is the "root issue" of violent confrontation between police and disfavored minority groups:

[T]he notion of "shoot first," that it's drug-related, that doors get broken down, that everybody's a drug dealer or everybody's a criminal. That's where I believe that this all started. I don't have all the answers for what happened [in Minnesota].

The Washington Post editorial board thinks it's hunky dory for the federal government to prosecute a woman growing her own medicinal marijuana for personal consumption, yet Gary Johnson is the weirdo for pointing out that the drug war has escalated police-community tensions? No wonder they needed to construct a straw man to make him look goofy.

3) "Climate change is real but regulations to cope with it aren't needed, because consumers will demand clean energy"

Johnson didn't say regulations "aren't needed," he said "I would not be supporting government regulation that ends up with us losing jobs," and that he's against a carbon tax, because "I'm so indelibly a no-new-taxes guy." Now, maybe the editorial board believes that federal environmental regulation inevitably costs jobs, but Gary Johnson does not, singling out the Environmental Protection Agency in the L.P. debate on Stossel as a federal department he would keep.

Also, William Weld went on in the interview to praise the U.S. involvement in the Paris Agreement on climate change, and to support cap-and-trade carbon schemes, though it's unclear whether Johnson agrees.

4) "The Islamic State is a danger, he acknowledged, but he suggested it will work its own way into oblivion; no need for U.S. troops to help in that process."

No, what Gary Johnson said here is actually more realistic, and hence radical to the ears of the Washington establishment. He said that Islamic radicalism will be there whether or not American troops are on foreign soil, and that our presence often makes things worse. Sample:

I would get the troops out—that the consequence of getting the troops out, as horrible as that's going to be–and I think that there has been precedent for, OK, we're going to pull out of Afghanistan, how many Afghanis need citizenship within the United States because you're going to lose your life having been allied with the United States? I mean, I think there are precautions here [so] that there's not a bloodbath. But as horrible as that's going to be doing it in 2017, it's going to be the same situation 20 years from now.

DIEHL: Wait a minute, if the Islamic State—you're prepared to have them consolidate power rather than leave U.S. troops there?

JOHNSON: Well this is a question that gets constantly asked. Let me ask you: How long should we be there? Forever?

DIEHL: No, I'm talking about Iraq and Syria.

JOHNSON: Same, all of the above. I mean, libertarians—I reject the fact that libertarians are isolationist. We're just noninterventionist. The fact that when you get involved in other countries' affairs, you end up with the unintended consequence—without exception, and please point out an exception—you have the unintended consequence of making things worse, not better.

It is still politically shocking at this late date in Washington's disastrous 15-year response to 9/11 to suggest that the whole solving-the-problem-with-American-troops approach is counter-productive, or that the very notion of "solving" anything reflects an arrogance and unconscious ideology that have made so much of 21st century governance a disaster. That says a lot more about the establishment than it does the Libertarians.