A conversation with the activist who finds some common ground with libertarianism but diverges sharply on other issues. 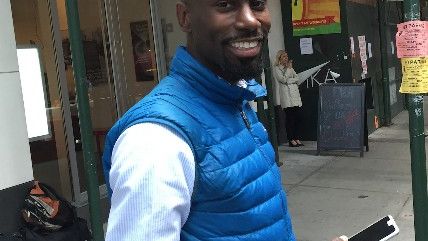 DeRay McKesson has been the most prominent face of the Black Lives Matter (BLM) movement since the summer of 2014, when protests over the shooting of 18-year-old Michael Brown by the Ferguson, Missouri Police Department triggered a national conversation about the militarization of police, the lack of transparency or available data pertaining to the use-of-force, and the racial disparity in prosecuting petty crimes and non-violent drug violations.

Though BLM is probably best known for its style of protesting, which includes shutting down political rallies, blocking traffic, and even storming into restaurants during brunch hours, the movement has also done some incredibly valuable reporting in the public interest.

In creating Campaign Zero, BLM activists utilized the Freedom of Information Act (FOIA), requesting use-of-force policies from the U.S.' 100 largest cities' police departments. In posting this material on a single easy-to-navigate website, BLM completely streamlined the web of local and federal bureaucracies, which largely exist to keep the public from knowing too much.

McKesson insists he's not a "leader" of the movement, but rather, a highly active organizer. He's quick to credit the efforts of his allies, who he says particularly took up a lot of the slack during his recently concluded unsuccessful campaign for the Democratic nomination for mayor of Baltimore. Over the past two years, he's made innumerable appearances on major media outlets and met with President Obama, Hillary Clinton, Bernie Sanders, and a number of other elected officials, including some Republicans.

Rarely (if ever) seen clad without his blue vest, McKesson, 30, has spent much of his career in public education, as a 6th grade teacher in Brooklyn and a senior director in the Minneapolis public school district. He briefly taught as a guest lecturer at Yale University's School of Divinity last year, and a few hours after we met up in a midtown Manhattan coffee shop last month, he received an honorary doctorate from The New School.

McKesson and I had a spirited conversation where we discussed the common cause shared by libertarians and BLM when it comes to police accountability and the systemic racism which informs much of the war on drugs, as well as the areas where the the two movements diverge, particularly when it comes to defining and defending freedom of speech.

McKesson says he won't be endorsing either Democratic nominee for president. But he agreed with a comment Sanders made at April's Democratic debate in Brooklyn in which the Vermont senator described Hillary Clinton's 1996 use of the term "superpredators" —referring to young people she deemed incorrigible when defending the Crime Bill her husband signed as president — as racist.

He also says it's nice that former President Bill Clinton has admitted that the Crime Bill had "dire consequences" which contributed to the crisis of mass incarceration, but that "his acknowledgment doesn't undo the damage."

Considering some of the most vocal allies in favor of criminal justice reform and an end to the drug war have been libertarian-leaning Republicans like Sen. Rand Paul (Ky.) and Rep. Justin Amash (Mich.), I wondered if McKesson had reached out to them for a meeting.

Though he credited Paul with being "one of the first candidates" to make an issue of civil asset forfeiture — even before Bernie Sanders made it a pet cause of his — McKesson says he hasn't reached out to Paul.

"When I taught a course at Yale," he explained, "all people heard about it was a reading I assigned called 'In Defense of Looting,' which people haven't even read and I think is a really interesting piece. Rand said something like 'I wouldn't send my child to a school where they teach that.'"

McKesson says he'd have no problem meeting and working with Paul, who he credited with using his platform to talk about how civil asset forfeiture and the drug war are wrong and disproportionately affect poor people and minorities, adding, "We might not have the same goals, but hopefully we'll be happy with the same outcomes." But, McKesson says, once Paul dropped out of the presidential race, "it seemed less urgent to meet with him."

Citing the fact that he agreed to an interview with Reason, McKesson says he and BLM have "proven that we want to talk to people, we want to work with people." He says, "some people want to only talk about class and not about race and I think that's a challenge because class is racism's center point," but that "our success will be about how we build coalitions and making people understand that this work impacts them, too."

In addition to Campaign Zero, BLM launched Check the Police, which also relies on FOIA-procured documents, in this case detailing major cities' police contracts, which frequently reveal a shocking level of privilege and immunity enjoyed by police officers. McKesson thinks "the media has been slow to report on it, partly because it's a lot of data."

He also pushes back on the suggestion that the problem with reforming police unions is analogous to other public sector unions, such as the teachers' union, who tend to circle the wagons and protect the worst actors in their ranks rather than reform from within.

McKesson argues, "The police in most cities have been almost wholesale unwilling to acknowledge that there's even a problem." He adds, "I've worked in two public school districts, Minneapolis and Baltimore, one as a senior leader. And while we might not always have agreed with the union and we might have had deep differences, they came to the table. There was some compromise, there was some give-and-take. Neither one of us would get what we want, and we might disagree on what the course of action should be. The police are literally like, 'there is no problem.' That is different."

In an interview with New York magazine last year, McKesson said that when it comes to the debate over free speech on college campuses, he didn't believe every idea deserved to be awarded the same merit or right to be heard.

In that interview, Mckesson described "free speech" as "code for this notion that there should be a 50-50 split for how we discuss topics" and added that he believes "Students are protesting in order to create spaces that promote dialogue and rich conversation. They are protesting to bring the First Amendment to campus in ways that actually speak to and acknowledge the black experience."

I offered that it's fair to say that some ideas are dumber than others, and that certainly there's a difference between shouting racist taunts at people and expressing potentially retrograde viewpoints, but I wondered if he thought the concept of free speech should provide space for people to be wrong or offensive? McKesson replied, "Yeah, but being wrong and being bigoted or racist, those are different things."

McKesson continues, "It's important to acknowledge the danger when we provide an academic venue for racism. It's interesting to hear people push the quote 'free speech' narrative in this way. They deny the speech of the people who disagree."

He adds, "You believe that all speech — not endorsed by the government but even in public settings — should get equal airtime, then that means that protesters do, too. That's a form of free speech. So, sure, if that's the world people want to paint. But I don't believe that's reality. People actually say you shouldn't uninvite a speaker. That's not the same time of free speech that people are proposing. Because if they were, they could be invited and boycotted, right? That would be a form of speech. So, I don't think people ask that question in an honest way, I think they ask, 'how can you believe in free speech and believe in protest?'"

Offering that I am fully in favor of the right to protest, I asked him to consider that protests which include shouting down a speaker are different because they deprive the speaker of his/her right to self-expression. McKesson disagrees.

"It's still free speech," he counters. "You're saying you don't like the way the free speech of protesters manifests itself. Which I respect, I get your point of view. There's a way that we can exercise the right to free speech that puts us in a place where we can learn and grow even if that's uncomfortable. I get that. Which is different from saying you have a commitment to free speech, I don't think they're the same thing."

I brought up President Obama's recent commencement speeches, where he argued that bad ideas should be exposed, debated, and defeated in the arena of ideas, and that shouting somebody down creates martyrs out of people with bad or wrong ideas, but McKesson was unmoved.

But what happens when the other side gets to invoke safe spaces, I asked, referring to a recent incident at George Washington University where a Palestinian flag was ordered to be removed from a dorm room window because it made some other students uncomfortable. I wanted to know if McKesson could see how this becomes a vicious cycle when anyone can claim offense or that their feelings were hurt, and how giving institutions the authority to police "correct" speech will inevitably lead to his and his allies' speech being abridged, as well.

McKesson says, "That is really dismissive of people's real struggle. If City Hall started projecting swastikas, no one would say 'You know what? Free speech.' People would say that is wrong." I countered that I didn't believe that was analogous to my argument, which was essentially that people should have to deal with their political opponents' right to express things that make them uncomfortable as long as it's not directly advocating for violence or harassment.

Unmoved, McKesson says, "I think you get to say that from a place of immense privilege. If someone in walks down the street in a Ku Klux Klan outfit, the way that impacts your life is very different from the way it impacts mine. To you, you'd say 'that's fine, he should be able to do whatever he wants.' I exist in a legacy of people where that outfit means something that's not about hurt feelings, it's not about people being upset today. It's about an entire broken history that for you to dismiss as something that should be able to be in the world is really sad."

At this point, I felt it necessary to make myself clear that I felt such behavior is wrong, should be shamed, and deemed socially unacceptable. But, I added, if someone walked down the street wearing a swastika, I think that exposes them as a racist and an idiot and hopefully somebody that would be ostracized from society. I just don't think it should be officially illegal and that's where he and I diverge. McKesson says he respects my position, but thinks "laws on hate speech and hate crimes do important work in a world that has been rooted in racism and bigotry since the inception of this country, which was not founded on ideals of justice."

Referring to the presumptive Republican nominee, McKesson says, "It appears that Trump's platform and his ideas are firmly rooted in hatred and bigotry and that's unacceptable. It doesn't seem that he's fit to lead. But Trump's presence is a reminder that the work of organizing must continue."

He adds, "no matter who the next president is, we've got work to do."