The practice has been called "entrapment" and "a form of legal harassment and coercion." 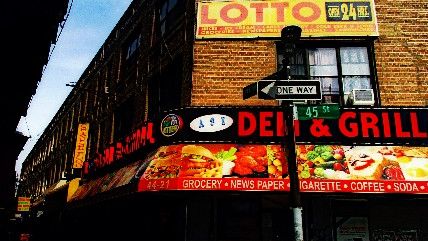 aren't only being selectively used against people whom the police or their landlords wish to evict, they're now being used to bully small business owners in low-income and minority neighborhoods.

Nuisance abatement laws are a throwback to the bad old days of 1970s-1980s New York, when open prostitution and drug dealing were Times Square's most identifiable traits, but these days, they are increasingly used as a means of bullying vulnerable hard-working people into helping the police increase their ability to surveil the area.

These civil lawsuits are being filed against "mom-and-pop" grocery stores (commonly known in New York as bodegas) and other businesses where police set up sting operations and then arrest and fine the store's owner.

For example, an undercover officer will wander the aisles of a store offering to sell a stolen iPad to a customer browsing for kitty litter or waiting in line for a sandwich. If that officer makes a sale, the nuisance abatement action is filed against the store's owner.

This actually happened to one upper Manhattan laundromat owner, Korean immigrant Sung Cho, who in the past had aided the local beat cops investigating crimes by sharing his sidewalk security camera's footage. But after a rogue sale of electronics took place on his premises, he found his store shuttered before he was even allowed a day in court.

According to the NYPD, the petty crime facilitated by the sting operation made Cho's store a "serious public nuisance" which "should not be allowed to remain open even one more day." Cho denied he facilitated any illegal activities and called the NYPD's operation "total entrapment."

Details like these were released in a sweeping new report from the New York Daily News and ProPublica, which also noted that in many cases, the owners agree to settle under terms compelling them to install security cameras and electronic card readers which capture the IDs of customers, both of which the police are permitted to have warrantless access to at all times.

Cho agreed to these terms, plus a $2,000 fine. As Sarah Ryley notes in the Daily News:

If anyone is even accused of breaking the law at his business again — whether a store employee or not — he faces escalating penalties: closures that would increase from 30 days to 60 days to 90 days to a full year with each alleged offense; fines climbing as high as $15,000.

Perhaps most damaging of all, the terms continue in perpetuity, even if the business changes hands.

"My business is essentially worthless," Cho said. "What did I do to deserve it?"

New York's public advocate, Letitia James, is quoted in the report as describing the NYPD's practice of aggressively and selectively targeting these businesses as "a form of legal harassment and coercion."

646 cases from 2013-2014 were examined in researching the report, and the data may indicate that some officers were deliberately trying to get certain stores closed.

The NYPD's guide instructs officers that three violations are needed to recommend a "closing order" to a judge, but only one alleged sale of alcohol to a minor is sufficient for a nuisance abatement violation. After reading about a particular officer whose modus operandi included waiting until he had evidence of a third violation before making an arrest, an unnamed retired lieutenant told The News "That would mean the purpose of those buys was to get a nuisance abatement."

Juventino Sanchez, the co-owner of one bodega whose cook sold a can of beer to a minor without asking for ID, now fears his store will be shut down soon because they are repeat offenders. But he says he won't pay the fine next time, he'll simply close the store and apply for welfare.

Sanchez says he works 15 hours a day, but he'll "apply for everything" if he's forced to close his business. "So they gonna pay me now, right? Because it doesn't make sense. I am working."