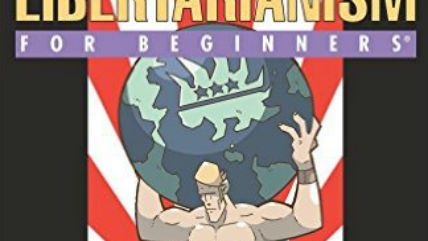 Occasional Reason contributer Todd Seavey tries to make understanding both libertarianism and, even more trickily, libertarians, easy or fun or both in his new book Libertarianism for Beginners, issued this month.

Attempts to sum up the basics of the richness of a philosophy of peace, property, and liberty in one easily digestible blockbuster book have obsessed libertarian movement types since the mid-'40s dawn of the first modern libertarian educational institution, the Foundation for Economic Education. Seavey's contribution to the tradition feels fresh, modern, and necessary.

I provided a pre-release blurb which appears inside the book (not on the back, but you can't win 'em all) which (not true of all blurbs, I hear) accurately describes my assessment of the book:

"Seavey provides a sober and sane introduction to, and defense of, a wild and radical philosophy whose relevance to the world, and popularity, gets more and more apparent by the year. Reducing a complicated body of thought in ways that are clearly understandable but never misleadingly simple, assessing both a body of thought and the often flawed humans who kept it alive, up to date on the tangled internal politics of the movement and timeless in showing how keeping your eye on the libertarian conception of property rights should guide your understanding of what libertarians think and why."

Seavey roots his libertarianism in private property, and gives a fair and ecumenical look at a wide range of distinctions and arguments within the existing movement in addition to explaining why libertarians think what they think and how it would be a good thing if we all were more free.

He doesn't write from an ivory tower perspective, literally or figuratively. Every page is marinated in the wisdom and understanding of someone who had had to argue about libertarianism both with non-libertarians and fellow libertarians for a long time.

Seavey is aware that ideas get nowhere without people pushing and refining them. He provides a helpful guide to the specific thinkers who have built the tradition, both now and in the past, without getting bogged down in academic apparati.

Libertarianism for Beginners would make a good gift to any intelligent person of goodwill who wonders what the hell you mean when you call yourself a "libertarian."