The former president can't decide whether he should brag about the 1994 law or apologize for it. 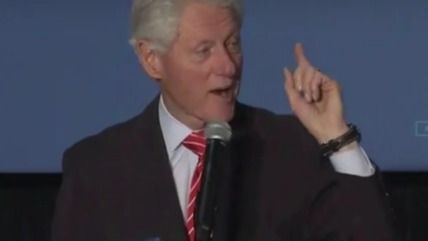 Bill Clinton wants you to know three things about the 1994 crime bill: He is proud of it, he is sorry about it, and it wasn't his fault. In any case, he says, his wife had nothing to do with it.

The former president's position on the 22-year-old Violent Crime Control and Law Enforcement Act is newly relevant now that Hillary Clinton, who enthusiastically supported the bill as first lady, is running for president as a criminal justice reformer. Depending on your sympathies, her husband's take is either nuanced or incoherent.

Speaking in Philadelphia last week, Bill Clinton was repeatedly interrupted by Black Lives Matter protesters who blame him for contributing to the "mass incarceration" he and his wife now decry. He defended the crime bill as an appropriate response to violence that disproportionately hurt African Americans.

"Because of that bill," Clinton said, "we had a 25-year low in crime [and] a 33-year low in the murder rate." While it's true that violent crime began a long decline in the early 1990s, crime rates started falling before the 1994 bill took effect, and there is little evidence that the elements of the bill Clinton touts played an important role in the continuation of that downward trend.

Last week, for example, Clinton bragged about providing $10 billion in grants that helped put 100,000 or so additional police officers on the streets. In 2014 Washington Post fact checker Glenn Kessler gave Clinton's claims about that program's impact "three Pinocchios," saying it "was not the primary or even secondary factor in the dramatic reduction in crime during the 1990s."

What about the crime bill's ban on so-called assault weapons, which expired in 2004? That year a report commissioned by the Justice Department concluded that "we cannot clearly credit the ban with any of the nation's recent drop in gun violence."

Clinton also mentioned the 1993 Brady Bill, which required background checks for people who buy firearms from federally licensed dealers. According to research by Duke University criminologist Philip Cook, a gun control supporter, that requirement "made no discernible difference" in gun homicide rates.

Clinton did not cite incarceration as a factor in falling crime, because he was bending over backward to distance himself from that aspect of the 1994 bill. He said the bill's punitive provisions, which included new mandatory minimum sentences and subsidies for state prison construction that were contingent on passage of "truth in sentencing" laws (which limit or abolish parole), were forced on him by Republicans.

According to Clinton, Vice President Joseph Biden, then chairman of the Senate Judiciary Committee and the crime bill's main sponsor, told him, "You can't pass this bill, and the Republicans will kill it, if you don't put more sentencing in." Yet as first lady, Hillary Clinton cited tougher sentencing rules as one of the bill's main advantages, and after it passed the administration bragged about making prison terms longer.

It seems likely that increased imprisonment did help reduce crime, if only by incapacitating people inclined to commit it. But the effectiveness of that policy depends on locking up the right people for the right amount of time, and Clinton now concedes that the sentences he supported as president went too far.

"I signed a bill that made the problem worse, and I want to admit it," he said during another visit to Philadelphia in 2015. "In that bill, there were longer sentences, and most of these people are in prison under state law, but the federal law set a trend. And that was overdone; we were wrong about that."

Clinton was in a less apologetic mood last week. Perhaps he was tired of overheated criticism that exaggerates his role in the explosive growth of the U.S. prison population, a trend that began a decade before he took office and occurred mainly at the state level. But if Clinton wants less blame, he should stop taking so much credit.