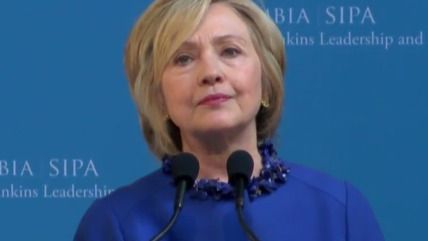 While researching this week's column about the 1994 crime bill, I noticed another dubious statement that Bill Clinton made during his speech in Philadelphia last Thursday. Talking up his wife's credentials as a criminal justice reformer, the former president claimed "she was the first candidate, the first one, to say, 'Let's get these people who did nonviolent offenses out of prison.'" She was the first candidate to say that only if you don't count Rand Paul, Ted Cruz, Rick Perry, or Jim Webb, all of whom were not only talking about criminal justice reform but sponsoring or signing legislation aimed at reducing the prison population before Hillary Clinton started highlighting the issue at the end of last April.

Paul, Perry, and Webb have dropped out of the presidential race, while Cruz seems to be retreating from his support for sentencing reform. But Clinton's Democratic rival, Bernie Sanders, has taken a bolder stance on criminal justice reform than she has, joining Paul in calling for the abolition of mandatory minimum sentences and sponsoring legislation that would repeal the federal ban on marijuana.

In any case, it simply isn't true that Clinton was the first candidate to say too many nonviolent offenders are serving too much time in prison. "We welcome her to the fight," Paul said after Clinton's first big speech on criminal justice reform. While Bill Clinton noted that "a lot of Republicans agree" about the need for sentencing reform, he made it sound as if they are following her example, instead of the other way around.

Clinton never showed much interest in criminal justice reform until about a year ago, and even then her position was pretty vague. While she has filled in some of the blanks since then, she is still dealing with the fallout from supporting her husband's tough-on-crime agenda, which he and she both concede contributed to what they now perceive as the problem of "mass incarceration." She cannot overcome suspicion of her sudden interest in this issue by pretending she was talking about it all along.