The presidential candidate's plan to snoop on Muslims is neither fair nor smart. 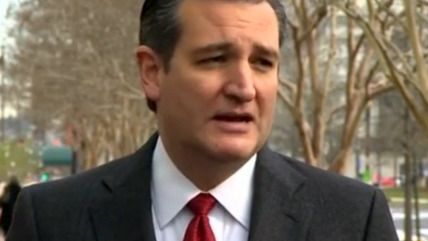 In light of last week's terrorist attacks in Brussels, Ted Cruz says, "we need to empower law enforcement to patrol and secure Muslim neighborhoods before they become radicalized." I am not sure what he means by that, but I am pretty sure it is neither fair nor smart.

"This is a war," the Republican presidential candidate emphasized the day of the attacks, suggesting that the patrolling and securing he had in mind was akin to what the military does in hostile territory. The implication seemed to be that American Muslims are an enemy population that needs to be pacified—not a promising approach unless the goal is antagonizing an entire religious community and discouraging the sort of cooperation that might help identify would-be terrorists.

"We know what is happening with these isolated Muslim neighborhoods in Europe," says Alice Stewart, a spokeswoman for Cruz. "If we want to prevent it from happening here, it is going to require an empowered, visible law enforcement presence that will both identify problem spots and partner with non-radical Americans who want to protect their homes."

Stewart, who likens lurking Islamic radicals to drug dealers and gangsters, makes it sound as if a conspicuous show of force in Muslim neighborhoods will be welcomed by peaceful, law-abiding residents eager for protection against the predators in their midst. But it turns out that Cruz prefers an invisible law enforcement presence, akin to the New York Police Department's defunct Muslim surveillance program.

Cruz says reviving that kind of "proactive policing" would be part of his plan to "patrol and secure Muslim neighborhoods." The Texas senator, who opposed the National Security Agency's indiscriminate collection of Americans' telephone records, has found a kind of mass snooping he likes.

Evidently when Cruz says "patrol and secure," he really means "surveil and rattle," since that is what the NYPD program did. As described in a 2013 lawsuit filed by two Brooklyn mosques, three community leaders, and a Muslim charitable organization, the program, which began in 2002 and ended in 2014, used informants, undercover officers, audio recorders, and cameras to monitor the communal activities and private conversations of Muslim New Yorkers—all without any evidence that they were committing crimes or planning to do so.

The lawsuit, which the city settled in January by agreeing to pay the plaintiffs' legal expenses and implement reforms aimed at preventing suspicionless monitoring of people based on their religion, says the surveillance program "generated daily reports on innocent Muslim New Yorkers' lives in New York City's neighborhoods, and the names of thousands of innocent New York City residents have been placed in secret police files." The payoff: zero leads, zero terrorism investigations, zero arrests, and zero attacks prevented.

According to the lawsuit, which argues that singling out Muslims for monitoring without grounds for suspicion violates religious freedom and the 14th Amendment's guarantee of equal protection, the surveillance had a chilling effect on mosque attendance, the content of sermons, outreach efforts, and charitable fund raising. Worried that they were being watched by spies and that innocent remarks or meetings might be misinterpreted, mosque leaders and members began avoiding potentially controversial topics, canceling events, skipping services, treating newcomers with suspicion, and shunning fellow Muslims rumored to be subjects of surveillance.

Toward the beginning of the program, police installed a surveillance camera outside Masjid At-Taqwa, a Brooklyn mosque, with the lens trained on the front entrance. Not surprisingly, "the camera intimidated congregants and caused anxiety among them," prompting them to stop attending services or to leave immediately afterward rather than lingering to chat.

The lawsuit says "knowledge and justifiable fear of NYPD surveillance," which was confirmed by a series of Associated Press exposés that began in 2011, created "a toxic, distrustful, and destructive atmosphere." Far from making Muslim neighborhoods "secure," such an atmosphere creates resentment at unjustified scrutiny, promoting exactly the sort of alienation and isolation that Cruz says he wants to avoid.