What's John Kasich Thinking? And Who Is Merrick Garland? 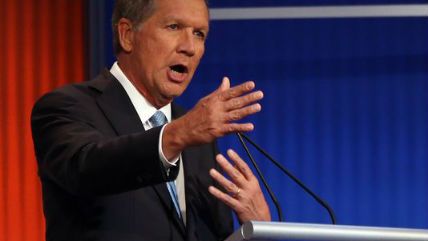 After winning his home state of Ohio last night, Governor John Kasich vowed "We are going all the way to Cleveland!" Leading to the obvious follow-up question, WHY??? The man has no mathematical path to the nomination whatsoever, and front-runner Donald Trump is warning about "riots" should the nomination be snatched from his stubby, authoritarian fingers.

Discussing the Kasich Perplex with me today on SiriusXM's Insight Hour (channel 121), where I am again hosting today at noon ET, is beloved Reasoner and known Ohioan Elizabeth Nolan Brown, plus former Rand Paul SuperPACer-turned Free the People impresario Matt Kibbe. Among the discussion topics: Is there anything the GOP establishment can't screw up?

Then in the second half of the show Brownie and I will be joined by crackerjack Reason legal beagle Damon Root, to talk about the reportedly DOA nomination of Merrick Garland to the Supreme Court.