Why Are the Newspapers That Condemn Donald Trump's Free-Speech Rants Endorsing Hillary Clinton?

The Donald has lousy rhetoric, but Hillary has a long track record of anti-First Amendment initiatives 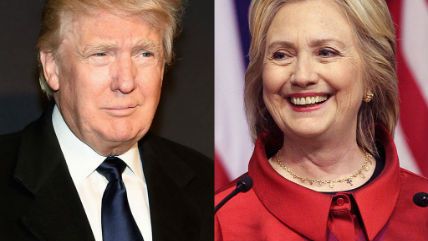 The Houston Chronicle last week began its "Say no to Trump" editorial this way: "Presumably, we need to rush this editorial into print before President Trump makes good on his threat to 'open up the libel laws.' No doubt his pal Vladimir Putin offers a more appealing media model."

It is understandable for those in the free-speechin' business to center their objections to the anti-constitutional GOP front-runner around his serial rhetorical assaults against the First Amendment. The Chronicle is right in seeking to protect "the nation's hallowed tradition of a free press" So why, then, did the same editorial board endorse Hillary Clinton?

Trump's rhetorical record on free speech is bad, no doubt. But he has never been within a city mile of political office until launching his unlikely bid for the presidency last June. Hillary Clinton was First Lady of Arkansas for 12 years, of the White House for another eight years (and was unusually active on policy in both roles), then a United States senator for eight years (during which she was runner-up for the Democratic Party's presidential nomination), secretary of state for four years, and now the odds-on favorite to be the next U.S. president. And during this long public career she has sponsored, co-sponsored, barnstormed for, advocated, suggested, and bragged about a series of specific laws whose texts and/or ideas were found to be at least partly unconstitutional on First Amendment grounds.

Clinton and Trump are on the same page when it comes to mocking free-speech objections to limiting online speech in order to protect America against terrorists. (No really: One says "You're going to hear all of the usual complaints—you know, 'freedom of speech,' etc.," and the other says "Somebody will say, 'Oh, freedom of speech, freedom of speech.' These are foolish people.") And yet editorial board after editorial board condemns only Trump for these words and positions, then endorses Hillary Clinton without citing hers.

Such as The New York Times. "[W]hat future leaders might do [to free speech] is chillingly demonstrated by Donald Trump's suggestion that the United States should close parts of the Internet to combat terrorism," the Paper of Record editorialized darkly on Feb. 29. So what about Hillary? "Voters have the chance to choose one of the most broadly and deeply qualified presidential candidates in modern history" the Gray Lady gushed the month before. The Las Vegas Sun laments that Trump "flies in the face of the spirit, if not the letter, of the First Amendment," but calls Clinton "a savvy stateswoman with an established understanding of world affairs and building allegiances."

I am not claiming that Donald Trump and Hillary Clinton have equivalent campaign rhetoric about the First Amendment—both are disqualifyingly terrible; Trump is likely worse. But in terms of actual policy, Hillary clearly wins the booby prize. Those who would chivalrously protect free speech against the incursions of The Donald would be a helluva lot more persuasive if they acknowledged, let alone engaged with, Clinton's long, odious track record on same.

Which you can read all about right here.