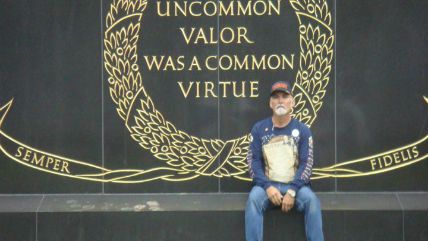 According to reports from both the New Hampshire Union Leader and the Portsmouth, NH, Patch, Jerry DeLemus, a Tea Party activist and husband of New Hampshire state Rep. Susan DeLemus, was arrested this morning in a home raid by the FBI on nine charges related to his participation in the 2014 standoff with federal officers at Cliven Bundy's Nevada ranch.

The charges include, according to the Union-Leader:

They report the indictment is out of Nevada.

A Business Insider profile of DeLemus and his role in the standoff from 2014 describes him as "running the makeshift "militia" of conservatives protecting the ranch, some of whom are armed with handguns and rifles."

The Patch contains this from former New Hampshire GOP chair Jack Kimball, reporting what he was told by Rep. DeLemus:

"She said that the FBI just rolled up with lots of vehicles and Agents who were in tactical gear," Kimball wrote on Facebook earlier this morning. "They forced their way into Jerry DeLemus and Sue's condo with weapons drawn and arrested Jerry and took him away."

Kimball considers the arrest unjust, and as the very fact the Bundy ranch standoff occurred, as well as its quasi-sequel in Oregon this year, shows, many agree: "A good and Patriotic Marine is now being prosecuted for standing up for Liberty," Kimball said.

Cliven Bundy himself was finally arrested last month for his own role in the 2014 events.