Republican Elites Are Frightened by Their Own Base

#NeverTrump comes after years of cynical pandering, hypocrisy, and inaction 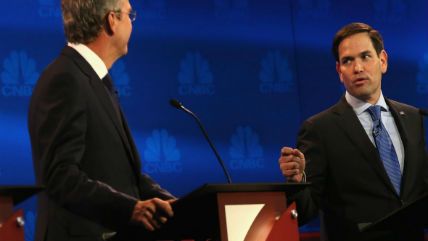 If you squint hard enough at last night's Super Tuesday results, you can see some glimmer of hope for the excruciatingly slow-to-action #NeverTrump crowd. "Trump won VA by 2.8 points, Arkansas by 2.2, Vermont by 2.3," pointed out The Weekly Standard's John McCormack. "These margins are essentially meaningless in terms of delegates, but if Trump went 4/11 instead of 7/11, press would say he had a bad night." Marco Rubio heavily outperformed polls in Virginia, and both he and Ted Cruz dominated among late-deciding voters. The final delegate haul for Super Tuesday will be considerably closer than the press coverage felt like last night. Squint, squint, squint.

But if the number-crunchers of PredictWise are correct that Donald Trump as of this morning has an 82 percent chance of winning the GOP presidential nomination, then the number-one Monday morning quarterbacking question of the entire political season is surely this: What in hell took Republicans so long to compete against their clownshow authoritarian front-runner? As George Will put it on Sunday,

So what explains the long paralysis of the anti-Trump Republicans? The New York Times on Saturday published a damningly detailed answer to that question, including this concise nugget: "Donors have dreaded the consequences of clashing with Mr. Trump directly. Elected officials have balked at attacking him out of concern that they might unintentionally fuel his populist revolt."

In other words, Republican elites are terrified of their own customers. That's worth reflecting on critically, even if you happen to share their loathing of Donald J. Trump.

Newt Gingrich last night tweeted out a job application to be the next Chris Christie: "Trump's shift toward inclusiveness, team effort and unity was vitally important He has to build a Reagan like inclusiveness to win this fall." This may have come as a surprise for those who cling stubbornly to the fiction that Gingrich is some kind of dazzling Man of Ideas, but since at least the mid-1990s the jabberin' Georgian has been more concerned with the science of populist rhetoric than public-policy entrepreneurship. When the Cato Institute a decade ago put out a grim collection of "limited government" hypocrisies titled The Republican Revolution 10 Years Later: Smaller Government or Business as Usual?, just about the only contributor who wasn't openly embarrassed by the track record of the 1994 takeover was Gingrich himself. Not because of how he governed, but how he won.

"People who dismiss our victory as a fluke do not study our base very often," Gingrich wrote. "We had nine million additional votes in 1994, the largest one-party increase in American history. There is a huge pool of uncommitted voters who have no interest in politics. Thus, when campaigns are able to mobilize such groups, they win in a big way." Well, neat.

Republican politicians have long since grown accustomed to—in fact, dependent on—the chasm between their own bomb-throwing rhetoric and dud-like accomplishments. For evidence, look no further than the 114th Congress, currently under unified Republican rule for the first time since 2007. How have the alleged fiscal conservatives responded to finally having some legislative power during the Barack Obama presidency? By blowing up the sequestration cuts, waving away the debt ceiling, and once again punting their duty to pass budget legislation in favor of a single, last-minute omnibus spending package with all kinds of freedom-harshing provisions within. You can read all about it in the current issue of Reason, which should be in your mailbox by now.

I think it's like Charlie Brown and Lucy….The voting population is so tired of…trying to kick the football, and it gets pulled away from them at the last second. They have sent some people here to Congress who said all the right things, they ran as Tea Party candidates, then they got up here and they voted for the omnibus bill, or voted for Speaker [John] Boehner on their first day after pledging they wouldn't vote for him. And so what they're looking for is somebody that's not going to be controlled when they get here.

Even more reckless than mere promise-breaking is pandering to either the real or imagined prejudices of the base. John McCain, a lifelong elitist with open hostility toward the conservative grassroots, famously went to "crazy base-land" when he could finally smell the ring of power, reversing his positions and rhetoric on gay marriage, immigration, and even condom use. Mitt Romney, the Republican who has taken on Trump with the most gusto during this campaign season, arguably paved the way for his success by out-immigrant-bashing the 2012 field while promising hardest to protect old-age entitlements. Couple this with the old establishment chestnuts about somehow balancing a budget while undoing the allegedly "devastating cuts" to our military, and a picture emerges of structural insincerity and the ritual, nose-holding manipulation of the activist base.

Time and time again, the GOP establishment has given its own grassroots the back of its hand. As I wrote one year ago,

The Republican Party in 2015 has a huge and unsated anti-Establishment passion, one that's only stoked by the primacy of elite characters like Jeb Bush (and Mitt Romney before him). Establishment vs. anti-Establishment has been the internal GOP divide since at least spring of 2010 (when Tea Party types began primarying Republican darlings in earnest); led to just a brutal parliamentary smackdown of grassroots activists at the 2012 Republican National Convention, and is as inevitable in the 2016 presidential campaign as water flowing downhill. This fight will be had, no matter how hard RNC Chairman Reince Priebus tries to schedule it out of existence. Candidates who figure out how to channel anti-establishmentarianism will punch above their weight during primary season (something Ben Carson and Ted Cruz in particular seem to understand); candidates who fight against it (Bush most openly) are in for a rude surprise.

Donald Trump is calling out Republicans for being phonies, and he's right. I may cheer lustily for him to lose, but until they re-examine their own lousy policies and politics (especially though not only on foreign policy and spending), I will not be cheering for the establishmentarians to win.