Sarah Palin Used to Think Polls Were Only For Strippers

Also in Iowa, Donald Trump tells crowd to "knock the crap" out of protesters. 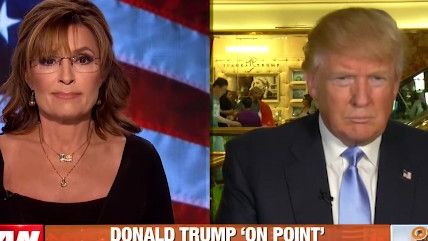 Hours away from the Iowa caucuses,

former Alaska Governor Sarah Palin told the syndicated entertainment news show Extra that she was once skeptical of polling, but now that her preferred candidate for the Republican nomination for president is expected to win Iowa, she's become a believer:

Usually, I say polls are only good for strippers and cross-country skiers, but in this case, I do think that the polls are accurate and are reflecting that the American people, the electorate… we're looking for something different.

Palin credits Trump's rouge-ishness, a quality once attributed to her by exasperated senior strategists in charge of her failed bid for the vice presidency, for his current standing at the top of the polls. With her trademark command of the English language, the woman who could have been a heartbeat away from the nuclear codes said:

He's going rogue all the time, and I think that's what Americans are craving right now is some candidness, some willingness to talk about the issues that are first and foremost on our hearts and our minds to get constitutional government back into the system.

Also in Iowa today, Trump addressed a rumor he heard from one of his security guards that some rogue protesters might be planning on throwing tomatoes. Ever the man of action and understanding of the rule of law, The Donald told the assembled crowd that if they spot any potential tomato-chuckers to "knock the crap out of them…I promise you, I will pay for the legal fees."