The General and the Drug Lord

Drug warriors never win, even when they capture the enemy. 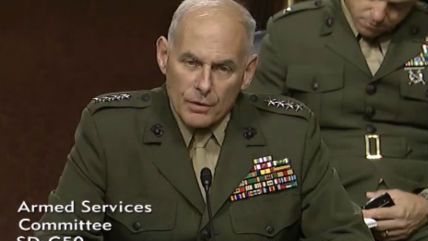 Marine Corps Gen. John F. Kelly, who plans to retire next month after more than four decades in the military, recently stepped down as head of the Miami-based U.S. Southern Command, a post he held for three years. In an interview with Military Times on his way out, Kelly repeated a complaint he had voiced while testifying before the House Armed Services Committee in 2014: Marijuana legalization in the United States made it harder for him to wage the war on drugs.

"The actual legalization does cause us problems because—the hypocrisy," Kelly told Military Times. "Where you stand is where you sit. So if you're a Latin American, and we're harping on them to do more to stop the flow of drugs, they say: 'Wait a minute. As we look north, the real problem is the demand. So why don't you do more to stop the demand for drugs….Why would we do more when you seem to be legalizing this stuff?'"

Kelly is right to perceive hypocrisy—or at least, grave moral inconsistency—in our current drug policies. He is also right to suggest there is something outrageous about the U.S. government's insistence that other countries bear the burden of stopping Americans from consuming intoxicants it has decided to ban. But the general's mission-oriented perspective does not allow for the possibility that the war he has been asked to wage is bound to fail because it is fundamentally at odds with human nature and the laws of economics.

The desire to achieve altered states of consciousness persists across time, across cultures, and across nation-states. Governments cannot extirpate it, and they are asking for trouble when they try to dictate how it will be satisfied. Kelly thinks it is inconsistent to ask other countries for help in stopping the northward flow of cocaine, heroin, and methamphetamine when four U.S. states and the nation's capital have legalized marijuana for recreational use. But that situation is no more inconsistent than criminalizing production, distribution, and consumption of those drugs while tolerating alcohol, tobacco, caffeine, and the bewildering array of psychoactive substances that can be obtained with a doctor's note. Prohibition is all about arbitrary distinctions.

Nor is enforcing those restrictions as straightforward as Kelly seems to imagine. Testifying before the Senate Armed Services Committee in March 2014, he complained that budget cuts had forced him to dial back drug interdiction in the Caribbean. "Because of asset shortfalls, we're unable to get after 74 percent of suspected maritime drug smuggling," Kelly said. "I simply sit and watch it go by." Later that day he told reporters, "Without assets, certain things will happen. Much larger amounts of drugs will flow up from Latin America."

Kelly apparently thinks interdiction reduces the total amount of drugs reaching the United States. But that is not how interdiction works, to the extent that it works at all. Given all the places where drugs can be produced and all the ways they can be transported to people who want them, the most that drug warriors can hope to accomplish is to impose costs on traffickers that are high enough to raise retail prices, thereby discouraging consumption.

How has that been going? "With few exceptions and despite increasing investments in enforcement-based supply reduction efforts aimed at disrupting global drug supply," a 2013 study published by BMJ Open concluded, "illegal drug prices have generally decreased while drug purity has generally increased since 1990. These findings suggest that expanding efforts at controlling the global illegal drug market through law enforcement are failing."

The basic problem is that drugs acquire most of their value after they get to the country where they will be consumed, so seizing them en route has little impact on the cost to consumers. If Kelly got the resources he wanted and increased the percentage of "suspected maritime drug smuggling" that triggered a response, there is little reason to think the upshot would have been less drug use. The economics of drug prohibition mean there will always be more than enough smuggling to compensate for whatever fraction drug warriors manage to intercept.

Likewise, there will always be more drug traffickers to replace those who are arrested. "I supply more heroin, methamphetamine, cocaine, and marijuana than anybody else in the world," Joaquín Guzmán Loera, a.k.a. El Chapo, bragged in his Rolling Stone interview with the actor Sean Penn. But Guzmán also observed that "the day I don't exist," drug use is "not going to decrease in any way at all."

On January 8, the day before that interview was published, Mexican soldiers recaptured El Chapo, who had been on the lam since escaping from a high-security prison last July. The New York Times reported that Guzmán was "responsible for shipping tons of drugs to more than 50 countries around the world, with a wider reach than even Pablo Escobar in his heyday." It also noted in passing that his arrest "will do little to alter the dynamics of the drug trade or the war against it."

Penn complains that the point of his article about El Chapo was lost in the hullabaloo surrounding the drug lord's dramatic but ultimately inconsequential capture. The actor told CBS News "the entire discussion about this article ignores its purpose, which was to try to contribute to this discussion about the policy in the war on drugs." Penn made his view of that policy pretty clear in Rolling Stone:

There is little dispute that the War on Drugs has failed: as many as 27,000 drug-related homicides in Mexico alone in a single year, and opiate addiction on the rise in the U.S. Working in the emergency and development field in Haiti, I have countless times been proposed theoretical solutions to that country's ailments by bureaucratic agencies unfamiliar with the culture and incongruities on the ground. Perhaps in the tunnel vision of our puritanical and prosecutorial culture that has designed the War on Drugs, we have similarly lost sight of practice, and given over our souls to theory. At an American taxpayer cost of $25 billion per year, this war's policies have significantly served to kill our children, drain our economies, overwhelm our cops and courts, pick our pockets, crowd our prisons and punch the clock. Another day's fight is lost. And lost with it, any possible vision of reform, or recognition of the proven benefits in so many other countries achieved through the regulated legalization of recreational drugs.

Gen. Kelly blames the violence that Penn mentions on drug users. "If Americans understood what doing a little blow on the weekends—on a college campus or here on Capitol Hill—was doing to Honduras or El Salvador, or what it's doing to Colombia," he told Military Times, "I think they'd responsibly realize that this is not a good thing." But Penn is right that the "drug-related violence" plaguing these countries is caused not by drugs but by prohibition. Like the official corruption associated with the drug trade, it is a familiar feature of black markets.

Penn's evaluation is in some ways too kind. His estimate of drug control spending, for instance, does not include money spent by state and local governments, which are responsible for the vast majority of drug arrests. Nor does it include the cost of keeping half a million drug offenders behind bars. Calculations by Harvard economist Jeff Miron indicate that the war on drugs costs taxpayers more than twice as much as the figure Penn cites.

But in one respect Penn does not give American policy makers enough credit. While other countries have eliminated criminal penalties for drug use (Portugal) or even tolerated the retail sale of marijuana (Holland), the first jurisdiction in the world to legalize the production and distribution of a heretofore proscribed substance was Colorado, followed by Washington, Oregon, Alaska, and (on a noncommercial basis) the District of Columbia. Those experiments, the source of the hypocrisy charges that bedeviled Kelly, point the way toward a peaceful resolution of an unwinnable war.