Like Obama and Clinton, the former Florida governor wants to "take rights away from law-abiding citizens." 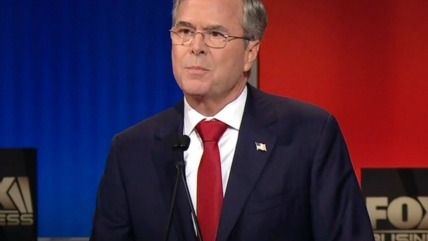 During last night's Republican presidential debate in North Charleston, South Carolina, moderator Maria Bartiromo asked Jeb Bush whether, in light of the massacre at Emanuel AME Church in Charleston last June, he could support "tightening standards for not only who buys guns, but those who sell them." The former Florida governor correctly noted that Dylann Roof, the man charged with murdering nine people at the church, was able to buy the gun he used from a federally licensed dealer because the FBI did not flag him as disqualified (based on a drug arrest indicating he was an "unlawful user" of a controlled substance). "In this particular case, the FBI made a mistake," he said. "The law itself requires a background check, but they didn't fulfill their part of the bargain within the time that they were supposed to."

Bush criticized President Obama and Hillary Clinton, the presumptive Democratic presidential nominee, saying their "first impulse" is to "take rights away from law- abiding citizens." But that is what happens when the law says someone is never allowed to own a gun because at one point in his life a psychiatrist and a judge thought he might be suicidal. If Bush wants to loosen the criteria for prohibiting gun ownership, so as to capture people who are deemed to be "spiraling out of control" but do not meet the legal standard for commitment (which is typically the case with mass shooters), that means he, like Obama and Clinton, wants to "take rights away from law- abiding citizens."

In fact, Bush and Obama see eye to eye on mental illness as the mark of a murderer. "That's a serious issue that we could work on," Bush said. "Republicans and Democrats alike believe this."

It's true! Bush's gun-grabbing inclinations probably won't endanger the "A plus rating [from] the NRA" that he bragged about last night, because the NRA seems to agree that people with mental illness have no Second Amendment rights. After the 2012 Newtown massacre, NRA Executive Vice President Wayne LaPierre demanded "an active national database of the mentally ill," which he argued would help prevent such crimes. Even if we assume that LaPierre's database would not include everyone who has ever qualified for a psychiatric diagnosis (i.e., nearly half the population), there is no practical way to distinguish between the few angry or troubled oddballs who will end up committing mass murder and all the rest. Any attempt to do so would inevitably "take rights away from law-abiding citizens."