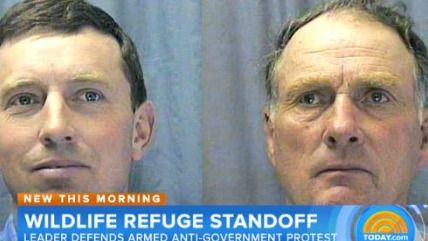 When Dwight and Steven Hammond arrived at a federal prison in California on Monday, it was the second time they went away for the same crimes. In my latest Forbes column, I explain how that happened and why it sparked a protest in Oregon:

The occupation of buildings at Oregon's Malheur National Wildlife Refuge by a group of armed and disgruntled ranchers has brought national attention to a case that illustrates the injustices wrought by mandatory minimum sentences. The men who took over the buildings last Saturday, led by Nevada rancher Ammon Bundy, broke off from a protest in support of Dwight and Steven Hammond, father-and-son Oregon ranchers who were each sentenced to five years in federal prison for setting brush-clearing fires that spread to public land. Unfortunately, the intense hostility that the occupation has aroused among progressives has overshadowed a case that otherwise could help advance a transideological alliance in favor of reforming our excessively rigid and punitive criminal justice system, which is especially rigid and punitive in its treatment of drug offenders.