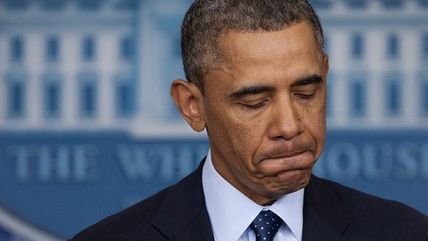 Congress can #DoSomething about this. pic.twitter.com/0dhwrGu7wf

We can all understand Obama's intense desire to be seen as active and engaged, but championing the TSA's "no fly" list as a way of stopping…what, exactly? Terrorism? Gun crime? Mass shootings? Jeez, that's just sad.

Whatever else you can say about it, the government's no-fly list is a travesty of justice. As Scott Shackford noted here just a few hours ago, the ACLU is suing the government over its random and unfair administration of the list, which keeps people from being able to travel freely within the United States. As Shackford summarizes it, "The way the federal government under Obama has managed the no-fly list is already a fairly clear violation of our Fifth Amendment right to due process of law."

So here's a new and improved hashtag/twee that Obama, who used to brag about being a constitutional law prof back when the stuff mattered to him and Democrats, might want to adopt:

#DueProcess beats #DoSomething every day, but especially in a free society.