The "SECURE Act" also puts a 30-day delay on citizens of countries in the Visa Waiver program. 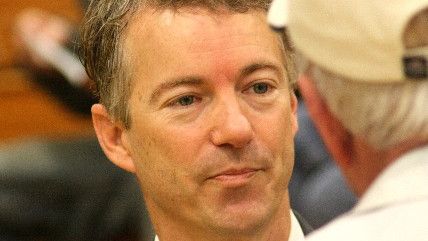 bill, dubbed the "Stop Extremists Coming Under Refugee Entry (SECURE) Act, that would temporarily ban refugees from 32 Muslim-majority countries, as well as the Palestinian territories and North Korea, from entering the US.

The moratorium on accepting refugees from the "high-risk countries" listed in the bill would end once the Department of Homeland Security demonstrates compliance with six stipulations intended to weed out potential terrorists posing as refugees. Some of the requirements are clear, such as monitoring of all refugees while in the country, though the demand for "enhanced refugee security screening" is more vague.

My colleague Matt Welch wrote of Paul's intention to bring this bill to the Senate two weeks ago, quoting the senator as saying, "I think Paris should wake us to the fact that we can't let just anyone come to this country without background checks."

As expected, Paul's bill also will deny admission to citizens of any of the 38 countries who participate with the US in the Visa Waiver Program "until after 30 days of security assessments have been conducted on such alien" or unless said individuals are enrolled in the Global Entry trusted traveler program. This appears to be a reaction to the fact that most of the terrorists who committed last month's atrocities in Paris came from France and Belgium, two countries where a visa is not currently required to visit the US.

As noted previously here at Reason, refugees are already subject to rigorous scrutiny and a mere handful of individuals who have come to the US as refugees or asylum seekers have had any involvement with terror plots.