A judge claims freedom of speech is a felony. 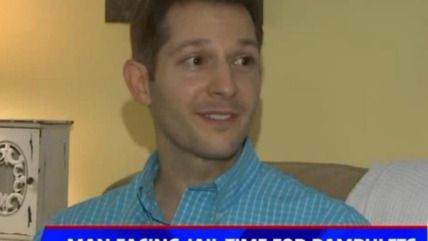 A Michigan activist faces up to five years in prison for exercising his First Amendment rights by distributing Fully Informed Jury Association (FIJA) literature outside the Mecosta County courthouse. WXMI, the Fox station in Grand Rapids, reports that Keith Wood was arrested last week after passing out about 50 copies of a FIJA pamphlet titled "Your Jury Rights: True or False?" Wood's pamphleting irritated Mecosta County District Judge Peter Jaklevic, who ordered his arrest on charges of jury tampering, a misdemeanor punishable by a $1,000 fine and up to a year in jail, and obstruction of justice, a felony punishable by a $10,000 fine and up to five years in prison.

Jaklevic, whose office declined to comment on the case, set Wood's bail at $150,000. "When he told me the bond," Wood told WXMI, "I was speechless. $150,000 bond for handing out a piece of paper on a public sidewalk? Speechless."

Wood's lawyer, Dave Kallman, said the charges are a clearly unconstitutional. "It's just a blatant, illegal, improper use of government power to squelch a person's constitutional rights of free speech," Kallman told WXMI. "There has to be pushback, and judges and prosecutors and people need to know: You cannot squelch people's free speech rights and get away with it."

Under Michigan law, jury obstruction occurs when someone "willfully attempts to influence the decision of a juror in any case by argument or persuasion,  other than as part of the proceedings in open court in the trial of the case." It is doubtful that Wood committed that offense by disseminating general information about jurors' rights, since he was not trying to influence the outcome of any particular case. In fact, he did not even give pamphlets to people who had been selected as jurors in any particular case. As Kallman put it, Wood was arrested for "for tampering with a jury that didn't exist."

The obstruction of justice charge against Wood is a common-law offense that occurs when someone prevents a juror from doing his legal duty. The statement of charges against Wood says he committed that offense "by knowingly and intentionally giving the members of a 77th District Court jury pool a pamphlet that encouraged the jurors to violate their oaths and directly contradicted the instructions the jurors would be given, thereby tainting the entire jury panel." In other words, Wood distributing pamphlets explaining the venerable priniciple that jurors have the authority to judge the law as well as the facts, while Mecosta county judges apparently tell jurors that they must confine themselves to the latter.

"I understand why the judge doesn't like it," Kallman said. "But isn't that part of free speech? You allow speech you don't like."

Jaklevic is not alone in thinking that talking about jury nullification is a crime. Last summer Denver District Attorney Mitch Morrissey charged two local activists with jury tampering, which in Colorado is a felony punishable by up to three years in prison. Morrissey charged Mark Iannicelli and Eric Brandt with seven counts of jury tampering each—one for each jury pool member who received a FIJA pamphlet. Although Morrissey concedes that distributing such information outside courthouses is constitutionally protected, his office says Iannicelli and Brandt went beyond that. It won't say how.