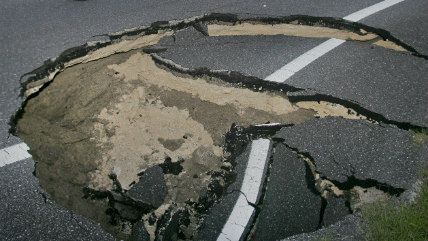 Earlier this week the Reason Foundation released its plans for fixing congestion in Southern California. In August Reason Magazine's Editor in Chief Matt Welch sat down with  Bob Poole, who's the director of transportation policy at the Reason Foundation, the nonprofit that publishes Reason.com to talk transportation and what America needs to fix its crumbling highway system. Video and original text are below.

Original release date was August 24, 2015 and original writeup is below.

"The whole interstate highway system over the next two decades is going to reach and exceed 50 years life and need to be replaced," says Bob Poole, who's the director of transportation policy at the Reason Foundation, the nonprofit that publishes Reason.com. "It's the crown jewel of our transportation system and it's going to start falling apart."

In his June testimony before the House Ways and Means Committee, Poole argued that Congress should begin implementing a long-term plan to fund and reconstruct the interstate system. The following month, lawmakers passed yet another stop-gap bill that extends transportation funding for a matter of months.

Ahead of that vote, Poole spoke with Reason magazine's Matt Welch, predicting just such an outcome: "In a few months it'll be a year of temporary extensions."

While Congress is fiddling with general fund revenue to plug immediate transportation financing holes, it is ignoring the massive and inescapable highway project. In a2013 study, Poole conservatively estimated a price tag of $1 trillion to rebuild the interstate system.

"Other estimates are higher, but there is no program, no identified funding source, and no possible way the current, as structured Highway Trust Fund could begin to do that project," Poole said.

He notes that politicians have been raiding the trust fund and toll financing revenue streams for decades to pay for programs completely unrelated to highways. Beyond that, the feds have made it illegal for states to create new toll financing. They've also eroded the "user-pays" principle that ensures continued financing by charging people based on their road use (e.g., through a gas or mileage tax) and sequestering those funds, rather than relying on general fund revenue that is subject to budget cuts.

For more on how Congress is bankrupting our highways and Poole's roadmap out of the current quagmire, watch the interview above.