Abortion Access Across Country Could Be Affected by Upcoming SCOTUS Ruling 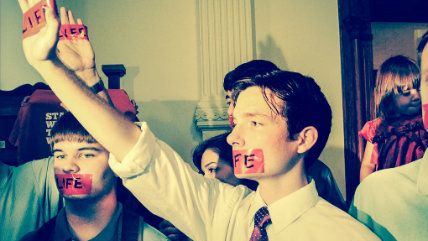 Last week, the U.S. Supreme Court agreed to hear a case brought by the nonprofit Center for Reproductive Rights on behalf of Texas abortion clinics. The group is challenging a 2013 Texas law imposing strict new regulations on abortion clinics and doctors in the Lone Star state. Expected to hear arguments in spring 2016, the court's ultimate decision could reverberate far beyond Texas.

For one thing, the SCOTUS decision will come in the "final trimester of the presidential campaign," as The Economist notes. There will be no way for the candidates to avoid talking abortion. And judicial appointments will also be forced onto people's minds.

The Supreme Court ruling will also pave the way for a number of similar regulations in other states to find resolution. As it stands, regulations similar to those contested in Texas are in the midst of legal challenges in Alabama, Kansas, Louisiana, Mississippi, and Wisconsin. Should the Supreme Court find the Texas regulations constitutional, contested rules in these states can go forward, and legislatures in other states will be empowered to pass similar mandates.

So far, such measures—referred to by opponents as targeted regulation of abortion providers (TRAP) laws—have been remarkably successful at shutting abortion clinics down.

As Damon Root explained here last week, the Texas case (Whole Woman's Health v. Cole) centers on two specific provisions of Texas House Bill 2 (the legislation that inspired an 11-hour Senate protest from former Democratic Sen. Wendy Davis). The first provision requires all abortion clinics to meet the same standards as hospital-style surgical centers, even if the clinics do not perform surgical abortions. The second stipulates that abortion doctors must have admitting privileges at a hospital within 30 miles. Texas says the regulations are legitimate attempts to protect patient health and safety, while clinics argue that the rules are just pretexts to force them into shutting down.

In an unsigned October 2014 order, SCOTUS temporarily blocked both Texas provisions from taking effect. "Justices Samuel Alito, Antonin Scalia and Clarence Thomas said they would have ruled against the clinics in all respects," AP reported at the time.

The Fifth Circuit Court of Appeals upheld the Texas regulations this past June, stating that "medical uncertainty underlying a statute is for resolution by legislatures, not the courts," and that a projected 75 percent reduction in the number of Texas abortion clinics should the law take effect does not pose an "undue burden" on women's access to abortion. The Center for Reproductive Rights asked SCOTUS to take the case, which the Court agreed to last Friday.

"When the justices consider Whole Women's Health, they will first ask whether the Court is the proper tribunal for a fine-grained factual analysis of the impact of HB 2 on Texans," explains The Economist. "If they see it as their role to dive into the weeds, the challenge becomes conceptual. Where is the line between making abortions a little more difficult or expensive to obtain' (perfectly constitutional) and imposing a 'substantial obstacle' (patently unconstitutional) on women who want them?"